The Allegory of the Alien Invasion

Lisa Kretz asks: How would you feel if it were you?

It finally happened. You know all those folks claiming UFO sightings? Some of them were on to something. There is life beyond planet Earth, and it finally contacted us.

The first ships landed twenty years ago. The aliens have been increasing their presence exponentially since then. What we call the A.E. (Alien Era) is marked by alien dominance both in terms of the power they exert over us and in their numbers. They now number over ten billion – a population even larger than humanity, hitherto the dominant species.

There are hardly any free humans anymore. You see, these aliens like the taste of our flesh disproportionately more than that of other animals on our planet, so they pen us up and are selecting the most docile and muscular of us to breed. Women are kept pregnant so that they can be milked. Not only do the aliens like human milk, but when they saw what we did with veal calves, they adopted the same behavior, keeping children confined and anemic so that their flesh would become pale and tender.

The aliens are like us in many regards. Physiologically they appear almost mammalian in some senses: they have two eyes, dark fur, a vertebrate structure, and they bleed (blue). They also seem to respond to pain in ways similar to us, giving evidence such as grimacing, screaming – what an awful noise that is – and avoiding the source of pain. They have a language we have not been able to decipher, and sometimes their interactions make it evident that they have telepathic capacities. They have a body language similar to ours, but they refuse to recognize this similarity, and they fail to understand all our attempts at communication. In fact they give no consideration to our social relations, our family times, our romantic desires… we are here to serve their needs. They’ve penned us up in such a way that we can’t even take our own lives to end the pain. 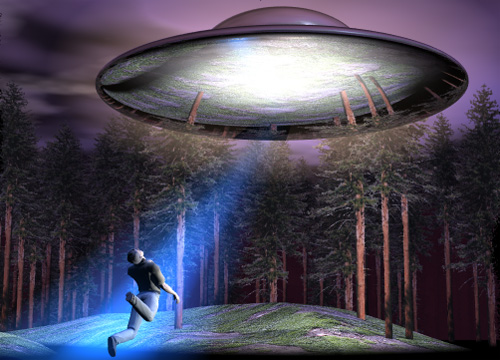 There are also human game reserves where the aliens like to let groups of people roam ‘wild’ within large ‘natural landscapes’ lined by electrified fences. Here we breed and form family units, and they come and pick us off with their lasers during hunting season to ensure we don’t overconsume resources. It’s taken to be a demonstration of their prowess to be able to shoot, gut and stuff a human. Since the most impressive specimens are the strongest, the fastest and the smartest – the leaders – those are the ones the alien hunters tend to kill and mount for show. As a result, natural selection is no longer helping our ability to survive in the long term. The fact that the aliens think these bigger pens facilitate our natural species growth is ludicrous.

We know that some of the aliens live off vegetables alone. The aliens are omnivores, and some of them choose not to eat humans. We aren’t sure precisely why. It seems that some of them are partial to treating domesticated humans – that is, the aliens’ pets – well, and so a number of them just refuse to eat humans. Some domesticated humans report having gone with their owners to rallies of angry aliens marching the streets with pictures of factory-farmed humans on placards. Some of the aliens even cry purple alien tears when they look at the pictures. They hold their domestic humans close to their huge alien bodies with their alien arms.

We know they think they’re better than us because they have that telepathic language going for them, and so they find us comparatively mentally slow and brutish. So I’m guessing they generally take the evidence they found of human treatment of ‘lesser species’ as a justification for doing the same sort of thing to us; in fact, it seems they’ve adapted a lot of our technologies used for slaughtering and imprisoning non-human animals to the slaughtering and imprisoning of humans. What I wish is that they all could see it from our perspective, just for a moment. They don’t need to eat us, and if they were in our shoes – if a more dominant, larger population of different aliens touched down on Earth who liked the taste of their flesh, their pregnant females’ milk, their fetuses, and their babies – they’d also wish that dominant species would act with care, not cruelty. Just because we don’t have the capacity to speak their language, and aren’t as intelligent and powerful as they are, doesn’t mean that it’s right for them to do whatever they want with us. It seems one thing humans have that they don’t have is an understanding and valuing of moral behavior. But, I guess, truth be told, when we were dominant, we didn’t have that either.

Lisa Kretz is an Assistant Professor of Philosophy and a Social Responsibility Fellow at the University of Evansville, Indiana.

• A different version of this allegory was originally published in The Journal for Critical Animal Studies 11, pp.133-5, 2013.

The Need To Move Beyond Homo Faber

Talking to the Animals

Why An Alien Invasion Is No Argument For Animal Rights

The Dragon: Memes, Culture and Evolution

An Introduction To Incontinental Philosophy