What Good Is Nature?

David Dobereiner reviews the history of the nature of Nature.

In Friedrich Nietzsche’s book Thus Spake Zarathustra (1883), Zarathustra might have said “God is not dead, He has moved to the countryside.”

This would have been more consistent with Zarathustra’s actions. Throughout the book we follow the anchorite prophet as he constantly communes with wild nature. As Zarathustra leads his disciples to the tops of mountains, he recharges his powers, in order to go down to the town to preach to the god-soaked citizens. His message to them is, “Do not believe the stories you are being told about eternal life after death. Leave the city and learn from other life-forms what real life is and how to live it authentically.” 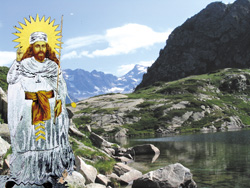 Zarathustra recharging himself in the mountains

Significantly, Zarathustra’s closest companions are an eagle and a serpent – solitary predators, in whom he admired their will to power as manifested in their will to kill. Nietzsche’s view of nature was essentially Hobbesian, but he drew opposite conclusions from it to Thomas Hobbes. ‘Nature red in tooth and claw’ for Hobbes implied that we need to set up social institutions to curb and control it, in so far as human nature interferes with the smooth running of human society. Nietzsche, on the contrary, thought we should embrace the natural laws of life and accept that the natural Will to Power of the predator was a good thing. The Will to Power should be pursued relentlessly by those rare individuals capable of attaining it, by which they could dominate and control the herd. The natural order was seen by Nietzsche as hierarchical, with the strong ruling over the weak.

Napoleon had come closest to the Nietzschean ideal. The Nazis misappropriated Nietzsche. Nietzsche was not a nationalist, a racist, or anti-Semitic, as Nazi propaganda labelled him, nor in the slightest degree a Fascist. On the contrary, he hated the state as an institution, and is better characterized as an anarchist individualist who was far more interested in the power elite wherever they arose than the rabble who herded beneath them. For Nietzsche, Napoleon was a hero precisely because he trampled over national borders. Napoleon failed; but failed nobly, and only because he was prevented from conquering the whole world by a gang of petty inferior beings.

A History Of Humanity In Nature 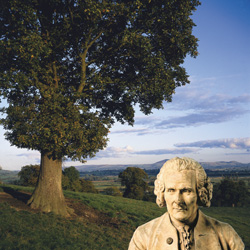 Rousseau getting back to nature

The relationship between humanity and the rest of the natural world has been a key problem for philosophy throughout the history of European civilisation. Plato postulated a separate invisible and eternal real world to which deluded humans would have access after death. Aristotle took a more integrated view, accepting the evidence of the senses as a more plausible ground for belief than the imagination. The Aristotelian view became more conducive to the later development of science. The Platonic view provided a rationale for explanations in terms of the unknown and the beyond.

The Church drew on both sources in constructing its narrative. Medieval scholastic philosophers distinguished human from other earthly life by asserting the immortality of the human soul; but significantly, they often taught that animals also have souls – just not immortal ones. Up to the Reformation in the Fifteenth Century, the view largely held by European civilisation was of an animated, enchanted natural world. Non-linguistic beings were intelligent, inter-communicating and living subjects. They were even sometimes tried for committing that which the Church defined as sinful.

Early in the Seventeenth Century, the Enlightenment was switched on by René Descartes and Francis Bacon, and animals lost their souls and became mechanisms. Even human bodies were relegated to machine status. Existence was split in two: there were disembodied, non-material minds on the one hand, and a non-conscious physical world on the other. Minds occurred in two places only, in humans and in God. But this mechanistic worldview enabled the beginning of the amazing advances in the sciences of physics and chemistry that ushered in the modern world. It seemed the machine model must be true if it worked so well in the mass production of artifacts.

Then Jean-Jacques Rousseau wrote, “Man is born free but is everywhere in chains” (The Social Contract, 1762), and asked why that should be. One implication of his answer was that the state of nature ought to be reflected in the nature of the state, and presently was not. Rousseau maintained a belief in God, but proposed that His will was manifested in the authentic or natural feelings arising in individual souls, which feelings could not be arrived at by reason. (Judging by his personal history, the springboard for his affirmation of the natural instinct arose out of a compulsion to justify his own lifestyle: a not-uncommon driver of original philosophical theories.)

In The Social Contract, his last book, Rousseau tried to work out how individual feelings, basically good, because God-given, should nevertheless be surrendered to the common good. Although he recognized that this implied democracy, he also correctly observed that democracy only works well on a small scale, as in the Greek city state. This insight got lost in the later chapters of the book, and also to history, so far.

By contrast, the Romantic movement following on from Rousseau’s ‘back-to-nature’ ethos inspired generations of artists, writers and poets in a positive way. For the Romantics, human nature could no longer be seen as separated from the rest of nature. Our wonder and awe at the beauty of the uncultivated natural world was henceforth to be seen by many people as confirmation of the oneness of being. In the Romantic worldview, the pantheist God described by Baruch Spinoza (“God or Nature”) became more plausible than the transcendent God of the Abrahamic traditions. 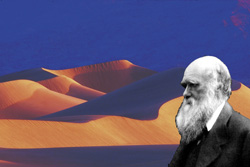 Darwin searching the ends of the Earth

And then came Charles Darwin (1809-1882). He demonstrated beyond a shadow of doubt that humans had evolved from earlier animals, and were themselves animals. We differed from other creatures in degree but not kind. This was a game-changer, and it put the kibosh on a special divine creation for humanity (even though, incredibly, nearly half the population of possibly the world’s most technologically-advanced country still believe Creationism, a century and a half after the publication of The Origin of Species).

As usual with revolutionary thinkers, Darwin’s message was misinterpreted – especially by Herbert Spencer, who, in spinning the phrase ‘survival of the fittest’ as a natural justification of the domination of the strong over the weak, gave succor to ruthless capitalism, absolutist free market ideology, racism, patriarchy and misogyny. Some of Darwin’s later work was itself concerned to show that natural selection strongly favours co-operators, lovers, even random acts of kindness: by the ‘fittest’, Darwin had chiefly come to mean reproductive fitness, which is strongly correlated with the capabilities of males and females to attract the most desirable members of the opposite sex. Anti-social males who are violent and abusive to their mates and relatives are comparatively rare in the animal kingdom because they are shunned by most females looking for suitable procreative partners. Males fighting to win their females is fairly common, but in most species, the females choose their male partners not the other way around, because there is more at stake for the female: she usually contributes a greater share of parental investment in the offspring. (However, generally, parenting is usually more fairly shared between mothers and fathers in non-human families than in the human, where patriarchal traditions often place extra burdens on women.) Pyotr Kropotkin, another close observer of human and other animal behaviour, reinforced Darwin’s findings in his books Mutual Aid, and still more in his last great book, Ethics.

In our own day, studies of animal behaviour, both in the field and in the laboratory, by Jane Goodall, Konrad Lorenz and many others, have served to reinforce our understanding of the commonality of ways of living on earth, while progress in the life sciences has continued to demolish the last vestiges of credibility in the idea that the human mind has a unique, non-natural nature separate from the rest of the natural world. More and more human institutions find their counterparts in the lives of other species, which have evolved in similar ways amongst social animals, and for the same reasons, by processes of natural and sexual selection expressed in (but not governed by) genetic outcomes. Evolutionary biologists such as Robert Trivers have now given precise mathematical explanations of some extremely complex and unexpected results of these processes. The capping discovery of ecology, with its exposing of the myriad interconnections between not only different life forms but the composition and chemistry of earth, air, oceans and climate, has now annihilated any attempts to continue to maintain exclusivity for any one species. We human animals are undoubtedly all part of one biosphere and if we would continue to live on Earth we must abide by its limits.

By advocating a human affinity with the natural world, the scholastics hit nearer to the truth than the Enlightenment’s apostles of Reason. It may be unreasonable to suppose that man has a soul detachable from his body; but nowhere near as unreasonable as asserting that one species has an essential attribute that all other species lack.

The Good of Nature

Nietzsche had the right idea to look for a better balance between nature, as expressed in the pure upwelling of the individual’s unsocialised will, and nurture, as the codes, laws, and norms imposed on individuals by society, but a Nineteenth Century understanding of the relationship between nature and nurture could not see them as anything but opposed. Basically, the guardians of society Nietzsche criticised started from a position of ‘nature bad, nurture good’. Nietzsche’s dilemma was that he saw that society was poisoning the well-springs of natural life, but could not see that returning to nature did not necessarily entail the rejection of core ethical values. The life sciences had yet to demonstrate that those socially-accommodating values were themselves of natural origin. Of course competition and violence play a role in the story of evolution, but, as Kropotkin rightly observed, “mutual aid is the predominant fact of nature” (Ethics). Another word for mutual aid is love – for example, the mutual love between mothers and their offspring.

David Dobereiner is the author of The End of the Street: Sustainable Growth within Natural Limits (Black Rose Books, 2006).

A Philosophy Lecture from the Good Old Days

The Life & Death of Common Sense

The Unthinkability of Philosophical Thoughts