“The English are not a very spiritual people, so they invented cricket to give them an idea of eternity.”
George Bernard Shaw

It wouldn’t surprise me if quite a few people are sick of Raymond Tallis, but your columnist can’t get enough of himself. He finds the thought of his own extinction very uncongenial. Nevertheless, he cannot ignore the lengthening contrail of yesterdays, warning him that his store of tomorrows is rapidly depleting. Sometimes he feels like a paddleless canoeist being swept towards a cataract. No wonder he occasionally toys with the notion of an indefinitely prolonged afterlife, compared with which his lost childhood, vanished maturity, and forgotten dotage would be a triad of eye-blinks. The idea of eternity beckons.

Eternity is something of an away match for an atheist, of course, although it does have a respectable philosophical as well as religious ancestry. It has haunted Western thought almost from its beginning. We have only to think of Plato’s conception of an unchanging Heaven, where true reality, palely and confusedly imaged in the temporal world experienced through our senses, is present in its uncontaminated eternal perfection as the Forms or Ideas that can be glimpsed by the trained intellect. In subsequent millennia, however, the idea of eternity has become rather complicated, contested, and politicised – not least as a weapon in the struggle to maintain the status quo in many societies where justice is severely restricted. The promise of an Eternal Reward for colluding in your own oppression or the oppression of others takes the pressure off the demand for a living wage, basic rights, or freedom from mistreatment.

The Concept of Eternity

Enough of the atheist tub-thumping. Let’s look at the concept of eternity in its purest form. According to the Cambridge philosopher JME McTaggart in The Relationship Between Eternity and Time (1909), eternity has at least three interpretations:

a) An unending stretch of time – everlastingness;

b) That which is entirely timeless; and

c) That which includes time but somehow also transcends it.

Readers may recall from an earlier column (Issue 86, 2011) that McTaggart believed time to be unreal. It is not surprising, therefore, that he rejects as ‘improper’ the interpretation of eternity as ‘unending time’: unending time would be unending unreality. He cites it, he says, only because it is a common misconception. Everlastingness, however, is eternity’s unique selling point for someone such as your columnist who feels his time is running out. ‘Forever and ever’ (with or without ‘Amen’) is what most of us would want from eternity, notwithstanding there is something not altogether attractive about being allocated an infinite number of days. Suppose they all turned out to be Mondays? And wouldn’t we sooner or later run out of things to do, or even to complain about?

At any rate, McTaggart is right: the purest idea of eternity does seems closer to timelessness than to time-without-end. He also distinguished ‘the timelessness of truths’ from ‘the timelessness of existences’. Unfortunately, the qualification for a truth being timeless can be quite unimpressive. While the sciatica I had in 2010 lasted only a few months, the humble truth of the assertion that Raymond Tallis had an attack of sciatica in 2010 is eternal. That may be why, beginning with Plato, the emphasis has been on timeless existences rather than truths. Such existences are usually ontological toffs. For Plato, Ideas such as Love, the Beautiful, and the Good, were its primary denizens, although he could not entirely exclude embarrassing ontological proles such as Hair and Dirt without being inconsistent. Platonist mathematicians – who believe that their discipline unveils timeless realities – have populated eternity with menageries of mathematical objects such as the Circle, the Square, integers, and more exotic beasts such as pi or the square root of -1. And theologians have peopled eternity with the immortal souls of those who have lived blameless lives. Unfortunately, given what happens to our bodies after our demise, the resurrection of their flesh doesn’t seem on the cards. The laws of nature would seem unlikely to allow the re-constitution of their masterpiece, your columnist, out of a confetti of his scattered ashes (or worse). But in a discarnate, indeed disembodied, state, he would not be anywhere in particular, and thus not available either to impinge or to be impinged upon. Bodiless, he would be without specific needs. Consequently, no action would be necessary or meaningful even if it were possible. Continuation of life under such circumstances would be comparable to breathing in a vacuum.It would be even more impoverished than a state of frozen expectation, or waiting-for-nothing, since waiting has at the very least the idea of a future, and, irrespective of whether time is tenseless, eternity most certainly is without tenses.

Anyway, timelessness would imply changelessness, since change could not occur without time: anything that really happens occurs at a definite time and takes a definite time. The idea of life without change is even more problematic. All forms of living matter – plankton, trees, and your next door neighbour – are in states of constant alteration, corrected by other alterations: the ‘polyphasic dynamic equilibrium’ that is organic existence. Directly and indirectly seeking the right kinds of alterations is the fundamental story of any life. So life in a timeless realm doesn’t promise to be exactly action-packed. Whiling away eternity would be a trial – particularly considering the neighbours you might have. Frozen humans would be bad enough, but think of sharing a billet with the Form of the Good or the square root of -1.

McTaggart’s third aspect of eternity, as something that “includes time but somehow also transcends it” raises further problems. How could time and eternity relate to one another? Mrs Smith, after a virtuous, God-fearing life, dies in 2015, fully qualified to be fast-tracked to an eternal reward. Assuming that her papers are in order, she arrives in the timeless zone the day she dies. By 2017, we can say that she has passed two years in said timeless zone. This is manifestly self-contradictory. And how can we say that her ‘crossing over’ took place after her life was finished and before her equally saintly husband, who died in 2019, joined her? What could possibly connect a particular point in time with timeless eternity, without the latter somehow losing its timelessness? 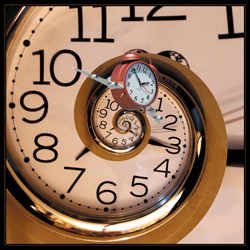 The relationship between time and eternity – or between your columnist’s days and the after-Tallis he is contemplating – is clearly a vexed one. It causes even more difficulties for theologians when they try to make sense of eternity’s star inhabitant, God, nipping out to make interventions in historical time – for example, smiting those who have made Him wrathful. (Is God’s irritability due to a particularly severe form of jet-lag resulting not from crossing time zones, but from crossing into and out of the zone of time itself?) The difficulty of His intervening at particular points in history is compounded if we think of God the way that Boethius conceived him in The Consolation of Philosophy (1485). Boethius’ God was eternal; and eternity for Him was “the simultaneous and perfect possession of everlasting life” embracing “the whole of everlasting life in one simultaneous present,” It must be difficult to dismount from this totum simul to get on with the mucky business of stacking the odds against the Canaanites or giving the Philistines what for.

This difficulty is distantly analogous to that which faces physicists trying to accommodate the fact that particular events happen – actually take place. General laws don’t deliver singular events; indeed, the more general they are the less they specifically deliver. No wonder the space-time manifold of Relativity Theory, in which everything is present at once and unchanging (if only because a total is by definition something that cannot be added to), seems to be as frozen as the eternity of theologians, although in modern physics the God’s-eye-view has been replaced by the virtual view-from-nowhere of mathematics.

Perhaps the most beautiful expression of the relationship between time and eternity is to be found in this famous passage in Plato’s Timaeus (c. 360 BCE):

“Wherefore he [God] resolved to have a moving image of eternity, and when he set in order the heavens, he made this image eternal but moving according to number, while eternity itself rests in unity; and this image we call time.”

Time as the moving image of eternity – beautiful, yes; but also baffling. The ‘moving image’ of something that is fundamentally unmoving would seem a misrepresentation which a God should not be party to.

The intersection between time and eternity seems prone to generate not only paradoxes but also ironies. The latter are exploited by that great ironist, and second most famous melancholy Dane, Søren Kierkegaard. In Either/Or (1843) he talked about ‘the aesthetics of marriage’, where the partner, showing fidelity to eternal vows in a temporal and temporary life, is able to solve “the great riddle of living in eternity and hearing the hall clock strike.” And believers must sometimes wonder about the irony of the church clock making them hurry to avoid being late for Mass, so as not to miss an appointment with the Eternal Being, as if the Eucharist were a booked meal.

The apparent existential and logical impossibilities that seem to discredit the idea of eternity may make us feel that it is a word to which nothing corresponds, a mere shadow cast by language: that ‘eternity’ stands for an in fact non-existent opposite of all that is transient; that the idea of the timeless is parasitic on the notion of time; in short, that (to borrow from St John) “In the beginning was the word”. However, we can’t on this basis dismiss the term as merely empty. For we are in the vicinity of a very profound mystery.

All beings – stones, beetles and philosophers – are in some (almost impossible to specify) sense in time, but only one has the idea of time. Man is the being for whom time, uniquely, is explicit: he times time, translating the apparent movement of the sun into hours on the clock and months on the calendar. He alone has placed inverted commas around it and called it ‘time’. Even infidels like your columnist must acknowledge this mysterious background whence the notion of eternity – whether it is unending time, timelessness, or a container that transcends and encloses time – has emerged. The concept of eternity raises questions about what kinds of beings we are, where we fit into the order of things; more specifically whether we are perhaps so fundamentally different from other creatures that a different fate may await us when our hearts stop beating and our supply of tomorrows gives out. These may seem dangerously heretical thoughts for an atheist, but the very existence of the idea of eternity keeps the door of its possibility ajar.

This said, a lot of work remains to be done to make ‘eternity’ coherent, never mind consoling. For the present, I shall have to settle for making the most of the days left to me, hoping they are many rather than few. They might even accommodate a visit to a cricket match for an authentically English image of eternity.

Raymond Tallis’s latest book is The Black Mirror: Fragments of an Obituary for Life (Atlantic). His website is raymondtallis.com.

Call No Event Future Until It Is Past

A Hasty Report From A Tearing Hurry

Did Time Begin With A Bang?

Draining the River and Quivering the Arrow