Stephen C. Small looks at the life of one of philosophy’s rebel heroes.

Albert Camus was born into poverty in Mondovi, Algeria, on November 7, 1913. He was raised as a slum kid by his mother, an illiterate charwoman. The family subsisted in a cramped three-room apartment. His father, a wine-shipping clerk turned army reservist, died of wounds suffered during World War I, thereby exacerbating the family’s economic plight.

Such an unpromising start might have stunted the ambitions of a lesser person. Undaunted, Albert Camus transcended his social and economic challenges by way of his relentless drive. Having risen from abject poverty, he once wrote that physical hunger had better instructed him on Marxism than had Marx’s tome Capital. No stranger to physical illness either, he caught tuberculosis in 1930 – a recurrent aliment that might have killed him. And yet by 1936 he had obtained undergraduate and graduate degrees in philosophy.

He was a handsome man, and romantically involved with many beautiful women. He was also married, and divorced, twice. On 5 September 1945, his second wife, Francine, gave birth to twins, Catherine and Jean. However, connubial life was an anathema to Camus, who thought marriage a constricting and outmoded institution. More successful in the life of the mind than in his relationships, he thrived in his art, becoming a world-renowned literary success in his own lifetime – he was awarded the Nobel Prize for Literature in 1957.

A revealing story has it that one of his thesis advisors scribbled in the margins of Camus’ dissertation, “Camus is more writer than philosopher.” Whether the story is apocryphal or not, the comment is true enough, for unlike other existentialists such as Jean-Paul Sartre (1905-1980) or Martin Heidegger (1889-1976), Camus lacked a systemized philosophy. Nor can he be easily categorized as an existentialist (a label rejected by both him and Heidegger). Rather, in his thought Camus identified himself with nature and the ancient Greeks. As for his writing, Camus was best known for his novels. His most celebrated writings include The Myth of Sisyphus (1942), The Outsider (1942), and The Plague (1947).

Camus was an Algerian of Spanish and French ancestry – and as such, an outsider in both Algeria and France, albeit that his literary accomplishments gave him access to the Parisian elite. But those who lionized the former slum boy were also sometimes condescendingly dismissive of him, and his vision of the authentic life took him well beyond the boundaries of Paris. During these ventures he sought out other voices and differing worldviews. This unorthodoxy was mirrored in his novels and plays. His untimely death ended a most promising life. On January 4, 1960, he was killed in an automobile crash in Burgundy. His friend and publisher Michel Gallimard was at the wheel of the sports car, and also died a few days later from injuries sustained in the crash. 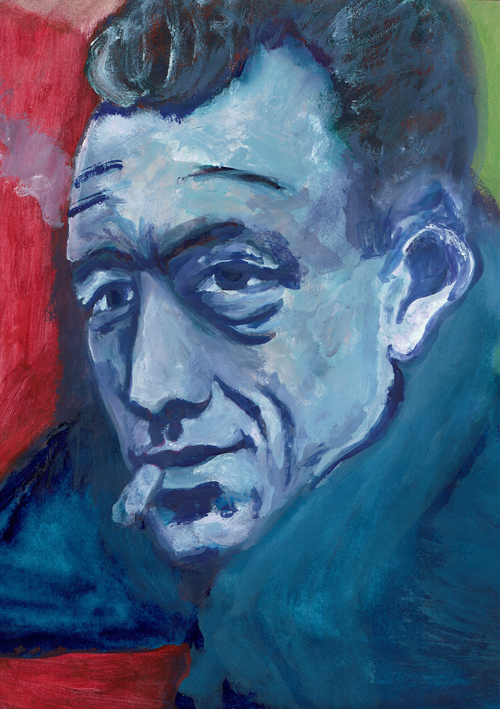 As a progressive public-spirited intellectual, Camus abhorred capital punishment, militarism, state-sponsored violence, and manipulative control over peoples’ minds, and frequently placed himself in opposition to forms of oppression. In 1935 he joined the French Communist Party, hoping to inspire people to unite to pursue justice and positive change.

Not everyone found his renegade style of Marxism endearing. In 1937 he was accused by doctrinaire Communists of being a Trotskeyite traitor – this being but a covering strategy for those dismissive of the horrors then rife in the Soviet Union. Camus responded with his own accusations, thereby stirring up the ire of the apologists, and alienating friends.

During World War II Camus joined the French Resistance to fight against Nazi occupation. During that period he met and befriended Jean-Paul Sartre. Camus became the Editor In Chief of the Parisian underground resistance newspaper Combat, and Sartre helped found the underground group Socialisme et Liberté – albeit the group soon dissolved, leaving Sartre to a relatively unmolested life of intellectual pursuits.

Unlike many of his colleagues, Camus’ thinking was politically nuanced. This was demonstrated by his having taken unpopular positions on controversial issues. Notably, he was among a handful of journalists to criticize the dropping of the atomic bomb on Hiroshima in August 1945. In 1948 he swapped the red flag of communism for the black flag of anarchism, joining the French anarchist student movement. He also wrote articles in support of Mediterranean humanism, central to which was the privileging of nature and moderation over ideology and violence.

In 1952 an acrimonious break occurred between Sartre and Camus. The flashpoint arose in the divergence of their views about the Soviet Union. Sartre was seemingly in denial about the magnitude of Stalin’s Terror, and Camus saw in Sartre’s ultra-Bolshevism a willfully hypocritical stance. Sartre and Camus reputedly never spoke to each other again. Nevertheless, when Camus died, Sartre authored a heartfelt eulogy in the France-Observateur, praising Camus’ life and works.

Absurdism is Camus’ variant of existentialism. So what is the absurd? According to Camus, ‘absurdity’ means a vast, almost comical gap between aspirations and reality. He claimed that life itself is absurd because of the the chasm between the meaning and planning we invest in our lives and the mocking indifference of the irrational universe, and explored this idea in his works.

The idea of absurdity is also well showcased by the writer Franz Kafka (1883-1924). In Kafka’s disturbing novel The Trial, the protagonist Joseph K is caught up in a waking nightmare. He struggles against a byzantine court system of interlocking threats, accusations, innuendo, but nothing works as it ought to, and he is stymied by all he sees and hears, only to be eventually executed by two bureaucratic buffoons. Like Joseph K, we cannot fit into the absurdity that surrounds us; nor can we escape it.

Camus explains how our absurd situation often compels us to choose inauthentic coping strategies. The first such coping strategy is that of actual suicide, since the absurdity of life begs the question, if the universe is so indifferent to us, why not just kill ourselves and get life over with? The Myth of Sisyphus begins by exploring this question. But Camus argues that to destroy the self is an act of resignation bordering on the cowardly – an unseemly giving-up when one has the freedom to instead revolt.

The second strategy for confronting the absurdity of life is to commit philosophical suicide – the death of our critical thinking. Camus characterizes philosophical suicide as the stopping up of thinking to avoid uncomfortable thoughts in a scary world. So instead of facing the uncaring universe directly, we accept a plausible cover story. Thus, various religious and secular doctrines serve to foster hope that somehow the universe cares about our personal fate. Judaism, Christianity and Islam can each have a palliative effect on the dutiful believer. Or this same coping strategy might rely on a secular belief structure. For instance, Karl Marx espoused a utopian vision in which the communist hunts in the morning, fishes in the afternoon, raises cattle in the evening, and debates after dinner. So too G.W.F. Hegel considered that Geist (the spirit of history) guides us via the cunning of reason to an ideal society. Yet Camus saw Hegel’s work as little more than glorifying power and the state. Religious or secular, all such thinking is underpinned by the belief that some higher being or force (such as dialectic) is at the helm. Camus interpreted such ideas as an exercise in self-deceit.

Our escape from the absurd takes us down some strange paths. From motorcycle gangs to consumer culture, we are replete with escapist strategies – but such solace affords only a temporary respite from the icy indifferent stare of the universe.

Philosophical suicide of the religious type is also found within the writings of Danish philosopher Søren Kierkegaard (1813-1855). Kierkegaard and Camus both testify to life’s absurdity, but they diverge on an important matter. To Kierkegaard, there is something far greater than worldly existence – belief in God – to which rationality does not fully apply; whereas to Camus the meaningless is made meaningful by way of revolt.

There is a good example of a Camus-like revolt in Herman Melville’s epic novel Moby Dick (1851). The ship’s officers Starbuck, Flask and Stubbs are considering seizing command of the whaling ship Pequod from the obsessively vengeful Captain Ahab. Stubbs concludes their portentous discussion by asserting that “a laugh’s the wisest, easiest answer” to all that’s strange in life. This attitude is a revolt against life’s absurdity.

Camus’ revolt may provide us with a royal road to an exhilarating sense of freedom. No longer bound by the prospect of thought-stopping philosophic suicide, we revolt not to avoid the absurdity, but to embrace it.

Found at the site of the crash that killed Camus was a fragment of a novel whose plot resembles his early life, entitled The First Man. His widow Francine blocked its publication for thirty-four years. But rethinking the matter in the mid-90s, she had it published to great renown. And so Camus’ legacy transcends his brief life, although leaving us no easy answers to the issues he confronted. As Camus succinctly put it, we must “be happy with our friends, in harmony with the world, and earn our happiness by following a path which nevertheless leads to death” (Notebooks 1935-1942).

Stephen C. Small received his PhD in Military Studies from The Union Institute and University, Cincinnati, Ohio. He also holds an MLS in Liberal Studies from the University of Oklahoma, Norman, Oklahoma, and a BA in Political Science, Excelsior College, New York.