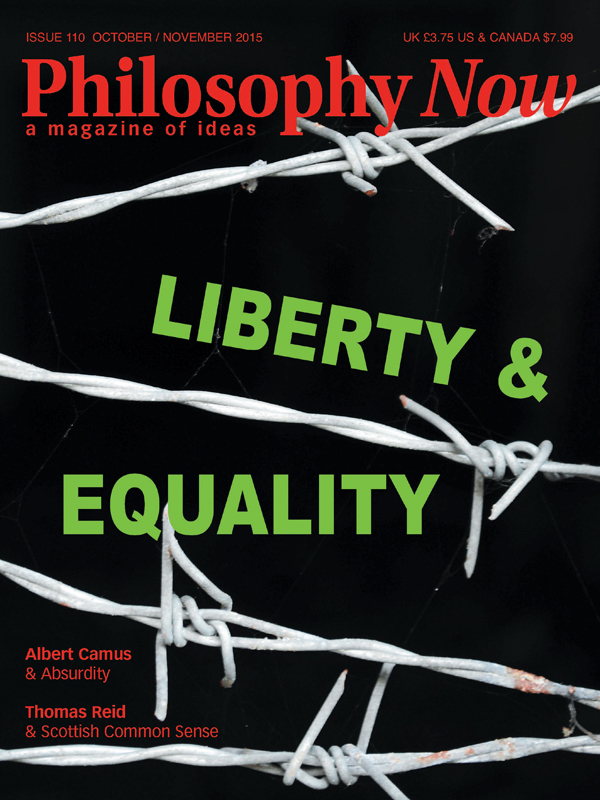 Philip Badger tries to convince us to be optimistic about human equality.

Simon Clarke argues that deciding when to die is a matter of individuality.

Seán Moran is watching the watchers.

The Paradox of Liberalism

Francisco Mejia Uribe explains why the rise of fundamentalism poses a problem for liberals, and suggests what they can do about it.

Ryan Andrews reminds us what free speech is for.

David Birch looks for the links between the teen spirit & the philosophical impulse.

Fred Leavitt argues that our most cherished beliefs are probably wrong.

Sally Latham examines the construction of identity through memory.

Can Robots Be Ethical?

The Life & Death of Common Sense

An obituary by Toni Vogel Carey

Stephen C. Small looks at the life of one of philosophy’s rebel heroes.

Free Post, Or Not • The Comedy of Reviews • Anderson on Trial • Art Articulations • Clarity and Brevity • Tallis’s Twists of Truth

In his new column Peter Adamson wonders what the ancient Greeks had to say about economics.

How On Earth Can We Be Free?

Raymond Tallis wrote this column of his own free will.

Running With The Pack by Mark Rowlands

David Taube exposes some of the difficulties in ever fully knowing the one we love.

The Univocity of Silence

Jackie Griffiths tells a tale of innocence and mortality.