Seán Moran is watching the watchers.

We are being watched. As we go about our daily business, closed-circuit televison cameras observe and record our every move. There are over six million CCTV cameras keeping an eye on the public in the UK alone, and public surveillance is at a similar level in all developed countries. In some cities we can expect to be seen by security cameras around three hundred times during a single day. The increasing pervasiveness and sophistication of surveillance technology raises philosophical questions both epistemic (to do with the acquisition of knowledge) and ethical (concerned with living the good life).

Epistemic considerations preoccupy the CCTV users: governments, law enforcement agencies and businesses. Their desire is to capture specific types of knowledge about us reliably and efficiently. They wish to form justified true beliefs about our actions and intentions so that they can identify enemies of the state, detect crimes, and protect property, among other things.

‘Justification’ here is the means by which a belief can be shown to be true. A particular true belief is justified, and hence can be regarded as knowledge, if a person comes to have that belief in the right sort of way. In the case of surveillance systems, justified true beliefs about individuals might be formed by tracking them: by capturing high-quality moving images of them and analysing their actions in well-founded ways. The CCTV operator, watching a bank of monitors, and zooming and panning the cameras by means of a joystick, is somewhat similar to a police officer walking the beat, watching certain people who catch his or her attention, and making inferences from what is observed, such as “I’ve just seen a mugging.” There are differences between the two cases, though. The hunches of the CCTV operator concerning whether a particular individual is up to no good are gradually being supplemented by software that can analyse the body language, facial expressions and behaviours of large numbers of people, in order to identify those who may be worth closer scrutiny. Already a single operator can keep tabs on many more citizens than the officer on the beat. This is a quantitative difference. But there is a more important qualitative distinction to be made, involving the breakdown of epistemic symmetry.

In 1787, utilitarian philosopher Jeremy Bentham designed a structure for observing prisoners that he called the Panopticon (from the Greek for ‘all-seeing’). The principle was that a central lodge in a circular prison would house an inspector who could look out at the cells arranged all around the circumference, as if from the hub of a wheel, and so could observe any prisoner he chose. Importantly, however, since the inspector would be hidden by a system of blinds, the prisoners would never know if they were being watched or not at any given time. The inspector could observe many prisoners, but could not himself be observed. This is a disruption of epistemic symmetry: the knowledge is all one-sided. Prisoners thus had to make the assumption that they were being spied on all the time, so would self-regulate their conduct accordingly.

There are those who like to compare modern states to updated versions of Bentham’s Panopticon, in which through CCTV the few observe the many without themselves being observed. As Michel Foucault puts it in his 1975 book Discipline and Punish, power needs to be visible but unverifiable, in order to give the illusion of omniscient authority, and thus make us regulate our behaviour.

This epistemic asymmetry in our being under CCTV surveillance raises significant ethical issues. Many feel uneasy at the rise of surveillance. They claim that civil liberties are being eroded and our right to privacy infringed. While few would object in principle to the authorities observing genuine criminals or dangerous conspirators, defining these is not a simple matter. There are fears that innocent members of the public are in effect being regarded as possible criminals, and that the category ‘enemies of the state’ might be extended beyond those plotting its violent overthrow, to those who are merely inconvenient to the government of the day, or just unconventional in some way.

We see a frightening working-out of this dystopian vision in George Orwell’s novel, 1984. There surveillance has spread even to the domestic domain. The Thought Police monitor citizens visually and audially, influencing them by means of propaganda shown on telescreens that can’t be switched off. Any hint of non-conformity is ruthlessly suppressed. Even pulling an improper expression (for example, incredulity when a victory is announced) is an offence: Facecrime. As in Bentham’s panopticon, citizens don’t know whether they are being watched or not, so they habitually wear blank expressions and behave compliantly. 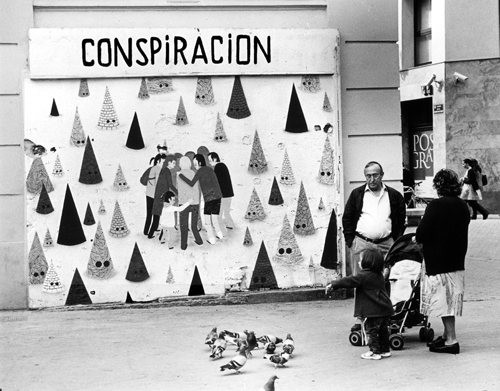 Surveillance in Valencia by Seán Moran, 2010

The Ethics of Surveillance

Although there is a widespread ethical intuition that something is wrong with an Orwellian proliferation of surveillance technologies, it is surprisingly hard to mount a principled ethical argument against the spread of CCTV. Indeed, some philosophers argue that there is no objection on the grounds of ethics. In Res Publica (2007), Jesper Rydberg compares a surveillance camera to old Mrs Aremac (‘camera’ backwards), who spends her days watching the street below from her third floor apartment. She is doing no harm to the people she watches, and they have no strong right to privacy, since they are in a public space. So, argues Rydberg, were a CCTV camera to be positioned outside her apartment to view the same scene, this would be equally harmless.

A CCTV camera, though, is not a benign (if nosy) old lady. It is part of a ‘surveillance assemblage’ of millions of other cameras, operators, software and communications systems. If there were six million old ladies watching the streets, each keeping a log of what they saw, and reporting anything ‘suspicious’ to the authorities, like the Stasi informers of Cold War East Germany, we would regard them less sanguinely.

Someone might also argue that our awareness of the presence of the cameras has a chilling effect on us, and since they are causing distress, they ought to be banned. This argument doesn’t stand up, however. Lots of things about a street scene might distress us, including the poor taste of the architecture, the crassness of the advertising, and the grumpy faces of the other pedestrians, but our reaction does not justify banning any of these things. Furthermore, the chilling effect is just what the authorities are seeking: it’s the secular equivalent of the warning that God is watching and taking note of any sins you commit in order to mete out punishment later. The cameras are ‘hidden in plain view’ (did you spot them in my photo?) so that the innocent citizen may not necessarily notice them, but the potential criminal will be discouraged by their unnerving presence.

Looking At The Future

Our willingness to endure personal privacy infringements for the sake of a perceived greater public good may allow a pernicious encroachment on our privacy that’s disproportionate to the gains in public safety. And it seems that the epistemic advantage enjoyed by the users of surveillance technologies will only increase, since the quality and detail of the beliefs they can form about us are likely only to improve.

Cameras do seem to reduce crime, or at least improve clear-up rates after the event; but this does not necessarily justify putting the whole population under suspicion. A point may be reached where the statement ‘If you’re doing nothing wrong, you have nothing to fear’ will start to ring hollow. This is a slippery-slope argument, however, and it is hard to define the point at which legitimate crime prevention slides into insidious social control. For example, it won’t be long before individuals can be reliably identified by computers using face recognition software, removing the possibility of public anonymity. Add the joined-up use of data mined from our online activities, supermarket loyalty cards, and other computerised records, and knowledge-driven businesses will flourish. This is well illustrated in the 2002 film Minority Report, where biometric-information-linked surveillance technology identifies the Tom Cruise character as he walks through a shopping mall and billboards call him by name, tailoring their advertising messages specifically to him. This scenario may not be far off in reality, if recent developments in Las Vegas, London and Tokyo involving smart CCTV linked to advertising displays are anything to go by. At this point the control element of surveillance technology will go beyond crime prevention, and become a powerful attempt to make us behave in ways congenial to commercial interests. Here the epistemic asymmetry of surveillance has intruded on our personal autonomy to an arguably unacceptable degree, without even the benefit of the argument that it is for the greater good.

So what can be done to mitigate the negative effects of proliferating increasingly sophisticated surveillance systems? Some states have responded by enacting data-protection legislation to prevent the unscrupulous harvesting of information about individuals. However, the business potential for increased profits and the political advantages of a biddable population that joined-up surveillance can offer, may make efforts to over-ride these ethical checks and balances irresistible.

One attempt to revoke the epistemic asymmetry on which surveillance relies can be seen by considering Juvenal’s question ‘Quis custodiet ipsos custodes?’ – ‘Who watches the watchers?’ The answer now is: ‘We all can’. As well as the surveillance technology of the authorities and business, many citizens now have their own personal sousveillance (sur= above, sous = below, veillance = seeing) equipment, in the form of mobile phones with built-in video cameras. In an inversion of the usual relationship between watcher and watched, these are increasingly being used to hold the powerful to account – witness their role in the Arab revolutions, and in cases of police misbehaviour in the USA and UK. The output of this sousveillance by members of the public can be distributed using the Internet, to form a synopticon, in which the many watch the few. So the partial restoration of epistemic symmetry that sousveillance enables may be seen as an ethical act that contributes to the good life for us citizens of the hyperopticon.

Seán Moran is a philosopher in Waterford Institute of Technology, Ireland. In his spare time he uses vintage Leica cameras to photograph life on the streets.