Dharmender Dhillon asks what happened to the revolutionary potential of hip hop.

At the time of filming in 2004, Dave Chappelle was the most lucrative comedian in the USA. Coming from a middle-class background in Washington DC, and having been raised by his African-American mother who has a PhD in linguistics, Chappelle is not a child of the ghetto, unlike his hero the comedian Richard Pryor (who grew up in a brothel). His sketch show, The Chappelle Show, shot him into the limelight in the early 2000s, and he became renowned for his biting social satire. The show’s most famous sketch involved Chappelle’s depiction of a blind elderly black male who was a white supremacist. 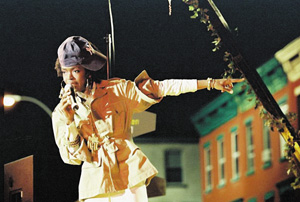 Enlisting the services of the innovative music video director Michel Gondry, Chappelle sought to document his putting on a secret, low-budget block party in the Bedford-Stuyvesant ghetto in Brooklyn. Inspired by Mel Stuart’s 1973 Wattstax, Block Party depicts Chappelle bringing together hip hop artists and members of the public to attend a block party funded entirely by himself. The aim appears to be to create a carnival atmosphere in an area of deprivation, in the manner of the ghetto parties of the 70s-80s. By bringing the party to the block, as opposed to holding it in a popular, ‘safe’ tourist spot like Central Park, sponsored by a multitude of profit-driven companies, Chappelle sought to create a more authentic event. It is apparent from the roster of artists Chappelle recruited (Dead Prez, The Roots, and Erykah Badu, to name a few) – who all performed for free – that his aim was not only to entertain, but also to educate. In the phrase of pioneering hip hop artist KRS-One, the party could be labeled ‘Edutainment’.

Marcuse: Father of the New Left

As a German Jewish intellectual escaping the Third Reich, Marcuse settled in exile in Berkeley, California. His radical brand of social philosophy led him to become the father of the New Left in 1960s and 70s US counter-culture. Notably, Marcuse served as the doctoral supervisor to Angela Davis, the feminist theorist and radical social activist once associated with the Black Panther Party. During the late 60s and early 70s, Angela Davis was on a CIA wanted list as one of the most dangerous people in the USA. She wrote her doctoral thesis on ‘Kant and Political Violence’ – some of it during a period of incarceration – and she is now Distinguished Professor Emerita at the University of California, Santa Cruz.

Marcuse is important in this viewing of Block Party because of the focus in his work on the power of people on the margins of society to affect revolutionary change. For Marcuse, such people have the least to lose and are thus able to see, feel and hear in a unique way. Marcuse repeatedly places great emphasis on black ghetto movements, as well as many women’s movements, as being the sites for socieal upheaval. He also stresses the power of art to affect real revolutionary rupture from within what, alluding to Freud, he coins ‘a repressive reality principle’.

Professor Davis similarly argues in a Marcusian vein that music is “a special form of social consciousness that can potentially awaken an urge in those affected by it to creatively transform their oppressive environments… Ultimately, it can propel people toward social emancipation.” (The Angela Y. Davis Reader, p.236.) But are Davis and Marcuse correct?

All of the music featured in Block Party can be bracketed within the genre of hip hop. Born in the 1970s in the ghettos of New York, pioneering artists with names such as Afrika Bambaataa and Zulu Nation demonstrated a clear awareness of their African ancestry prior to enslavement in the USA, including an understanding of the Griot tradition of West Africa – a tradition of poetry and storytelling stretching back many hundreds of years – from which they developed modern hip hop. In the argot of the ghettos in which it was created, the label ‘hip hop’ refers to ‘intelligent (hip) movement (hop)’. For Marcuse, ‘black music’ – he was talking in 1972 about blues and jazz, but his comments can be equally applied to hip hop – “is the cry and song of the slaves and the ghettos which, born in an exasperated tension announces a violent rupture with the established white order” (Counterrevolution and Revolt, 1972).

Marcuse further asserts in this work that:

“In this [popular] music, the very lives and deaths of black men and women are lived again: the music is body; the aesthetic form is the ‘gesture’ of pain, sorrow, indictment. However, with the takeover by the whites, a significant change occurs: white ‘rock’ is what its black paradigm is not, namely, performance. It is as if the crying and shouting, the jumping and playing, now takes place in an artificial, organized space; that they are directed toward a (sympathetic) audience.”

What Marcuse is alluding to is the watering down of a powerful aesthetic form, when, for example, the Rolling Stones cover Otis Redding, transmuting pain into performance by way of unabashed plagiarism. The problem with this for Marcuse is that this ‘carnival’ performance – in the tradition running from Woodstock to Glastonbury – functions as a “safety valve to upturn order such that order may be maintained.” So, although it may create a temporarily rebellious atmosphere, the performance ultimately merely reinforces the status quo.

For Marcuse another language is necessary to break the all-pervasive discourse which engulfs any resistance by means of what he terms ‘incestuous reasoning’. He identifies black literature, music, argot and slang as a potentially revolutionary language of the ‘other’ in opposition to the incestuous discourse of the establishment. This language meets all the criteria of Marcuse’s definition of the genuinely revolutionary. This revolutionary communication can most powerfully reside in the margins, in what Marcuse calls “The substratum of the outcasts and outsiders, the exploited and persecuted of other races and other colours; the unemployed and unemployable. They exist outside the democratic process; their life is the most immediate and the most real need for ending intolerable conditions and institutions. Thus their opposition is revolutionary even if their consciousness is not. Their opposition hits the system from without and is therefore not deflected by the system; it is an elementary force which violates the rules of the game and, in doing so, reveals it as a rigged game.” (One Dimensional Man, 1964.)

To add to the revolutionary potential of hip hop described by these criteria, Marcuse also sees the ghetto as the site par excellence of meaningful resistance. Referring to the faubourgs of Paris during the eighteenth century, he observes that “confined to small areas of living and dying, [the ghetto] can be more easily organized and directed” and thus ghettos “form natural geographical centres from which the struggle can be mounted against targets of vital economic and political importance.” In Block Party, we have many ‘outsiders’ using or performing black language, literature and music in the ghetto – mixing together all the ingredients of Marcuse’s revolutionary dynamite.

Nonetheless, there is much to be said against the apparent revolutionary potential demonstrated in Block Party. For example, Chappelle’s humour is perpetually infused with misogyny, and his use of the word ‘nigger’ is unsettling, demonstrating a lack of genuine cultural and political awareness, especially since his self-proclaimed hero Richard Pryor eschewed its use thirty years earlier. Many of the artists that Chappelle enlists also regularly demonstrate a level of misogyny in their works. As black female author and social activist bell hooks argues, hip hop music is often a site of black male expression of feelings of powerlessness in the system at large taken out on the ‘fairer sex’. She adds that “the openness of black males about rage and hatred towards females” results “at times worryingly [in] bragging in misogynistic rap about how they see sexuality as a war zone where they must assert their dominance” (see hooks, We Real Cool: Black Men and Masculinity, 2004). Whilst the male artists in the film do not perform overtly misogynistic works, notably, all three of the high-profile female performers featured in the film are only depicted singing love songs eulogizing men.

Furthermore, there appears to be what journalist Mark Fishers in Capitalist Realism (2009) calls a “hard-headed embracing of a brutally reductive version of reality.” This embracing of consumerism has destroyed any naïve hope that marginal culture could change anything. The acceptance is demonstrated by people in the film wearing T-shirts promoting symbols of anti-power: T-shirts that have been obtained through the capitalist mode of production, reflecting the ‘capitalistic Che Guevara phenomenon’, where pictures of the revolutionary communist are sold for profit on everything ranging from pens to posters, the film depicts many members of the audience and performers wearing the de facto uniform of the ‘weekend warrior’ – namely, a T-shirt with a picture of Guevara/Angela Davis/Marcus Garvey/Marvin Gaye/Muhammad Ali.

There is no doubt that since the early 90s, hip hop has been heavily corporatised, resulting in a re-branding and remarketing which involved, more often than not, a crude glorification of the most negative aspects of marginal ghetto culture. Much of hip hop’s early dynamism and revolutionary zeal has been replaced with hyper-masculinity, extreme misogyny, and crude materialism. Many of the artists in the film are guilty of this to some degree, Chappelle included. Hip hop’s contemporary position in the mainstream, with its dross lyrical content and formulaic beat structures, renders the majority of what is released defunct in terms of any revolutionary potential as the voice of the ‘other’.

The Margins of Hip Hop

As Marcuse’s peer, Theodor Adorno, says, “what slips through the net is filtered through the net” (Negative Dialectics, 1966), meaning that any revolutionary zeal from marginal ghetto music must necessarily be what can slip through the corporate net, and so must come from the margins of the margins. This is where there is scope in the film for evidence of Marcuse’s revolutionary hope being kept alive. There are many moments in it provided by artists such as the independent-label pair Dead Prez, as well as by Mos Def – who is a native of Bedford-Stuyvesant – and Talib Kweli in particular, which demonstrate a clear understanding of their ancestry and do not seek to glorify the harsh realities of ghetto life, but rather to ‘edutain’ through hip hop. This is achieved through explicit references to genuinely revolutionary figures, such as Huey P. Newton of the Black Panthers, Harriet Tubman, and Asata Shakur.

History has not necessarily vindicated Marcuse’s claims, but it is clear that the margins definitely generate fresh perspectives, and can create ruptures which the mainstream by definition cannot create. Even though some of the film’s performers, including Chappelle, grew up in relative comfort, they still possess a novel, if not revolutionary, way of seeing the world. This is exemplified by a seemingly light and humorous scene showing how Chappelle correctly predicted that the Beltway sniper of 2002 was black, simply because he had observed that the sniper was “taking weekends off.” This apparently trivial observation demonstrates a way of seeing different from that of the establishment, to a degree substantiating Marcuse’s claim .

All things considered, the worth of the film resides in its depiction of the power of the ghetto carnival and the music of the ‘other’ to challenge, uplift, and have positive ramifications – perhaps leading on to revolutionary ramifications – in the spirit of ‘Edutainment’.

Dharmender Dhillon is a PhD candidate at Cardiff University. His interests include Critical Theory, Race and Gender Studies, and hip hop.