Your football team only drew a game yesterday. But things could very easily have been different. If your goalkeeper had been standing two inches to the right at the crucial moment, the opposing team would not have scored the fateful goal and your team would have won. Still annoyed this morning, you dropped a cup and it fell to the floor. Given that you dropped the cup, it was very likely to fall. It might not have fallen, but only if there had been a sudden updraught of air. Unlike with the goal, the outcome could only have been different if something quite extraordinary had happened.

When philosophers try to get a grip on the idea that some things could easily have been different, while other things could only have been different in quite extraordinary circumstances, they talk about possible worlds. We live in the actual world, where the game was only drawn and the cup fell to the floor. There is a close possible world – close because only a little bit different – in which the game was won. That world is very similar to the actual world, up to the time when the opposing team tries to score. There is just a slight difference in the position of the goalkeeper. There is another possible world, much more distant, in which the dropped cup does not fall to the floor. In that world, there is an amazingly strong updraught at just the right moment. 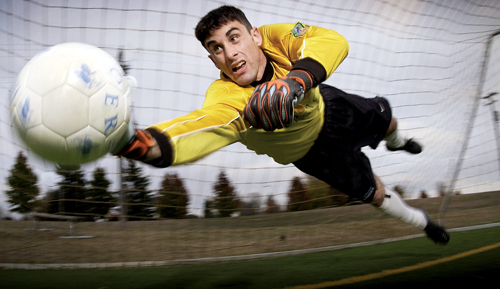 If only the goalkeeper had been two inches to the right

Philosophers bring possibility and necessity under the banner of modality – the first word in Boris Kment’s title. One reason why modality is important is its connection with explanation. How do we explain that your dropped cup fell? We talk about gravity. Gravity makes it necessary for objects to fall, unless something holds them up, and if there were no gravity it would be possible for unsupported objects not to fall. So gravity is at least part of the explanation of the cup’s falling.

Kment’s book explores the connections between necessity, possibility and explanation. He also weaves in another thread: counterfactuals. These are claims about what did not happen but could have happened: “If our goalkeeper had stood two inches to the right, we would have won”; “If there had been a sudden updraught of air, the cup would not have fallen to the floor.”

Counterfactuals need to be brought into the picture because they also central to explanation. Suppose we think that if the goalkeeper had stood two inches to the right, we would have won. Then we think that the goalkeeper’s actual position explains, or at least helps to explain, our not winning. Counterfactuals can also underpin attempts to explain what happens in scientific contexts. Suppose that you mix two chemicals, and the mixture does nothing until you heat it. Then the chemicals react and create a new compound. You say “If I had not heated the chemicals, they would not have reacted.” That encourages you to say “The heating explains the reaction.”

Modality and counterfactuals are brought together by their connection with the idea of possible worlds. Necessity is being the case in every possible world. Possibility is being the case in at least one possible world. And a counterfactual is true if the consequent would be true in the closest worlds in which the antecedent was true. “If the goalkeeper had stood two inches to the right, we would have won” is true because in worlds very close to the actual world, in which we just move the goalkeeper a little bit and make very few other changes, the goalkeeper blocks the incoming ball. We do not need to consider more distant worlds, for example those in which the goalkeeper stands two inches to the right but a sudden very strong gust of wind diverts the ball to the left. Likewise, “If I had not heated the chemicals, they would not have reacted” is true because in close possible worlds, in which you do not light the Bunsen burner but nearly everything else is the same, there is no reaction. We do not need to consider more distant worlds, in which some strange atmospheric conditions lead to a chemical reaction.

The discussion of counterfactuals, and of how to work out which possible worlds are closest so we can use counterfactuals to work out what explains what without making too many mistakes, takes up the majority of this book. The discussion is detailed and technical. This is all to the good. The devil often lies in the detail, so details need to be explored. Kment does so in a way that is as clear as it can be, given his decision to write continuous prose that will make sense to most philosophers without their having to do extra reading. But his discussion might have been even clearer if he had been a bit more technical, and had used mathematical concepts to define the properties of the space in which all possible worlds are laid out. He needs enough of a conception of the distances between possible worlds to say that some are closer to the actual world than others, to pick out the ones closest to the actual world, and to classify worlds as tolerably close (where physical laws like the law of gravity still hold) or as very distant (where some physical laws are different). On the other hand, he does not want distances to be too exact. He does not want us to be able to say that one world is twice as far away as another. If the required mathematical structure and how to measure and use distances had been spelt out in full at the beginning, rather than the requirements being outlined at the start and the details then filled in gradually as ways to overcome difficulties, that would have given a different shape to the discussion. Similarly, he might usefully have been more explicitly mathematical in his discussion of how some facts are ‘explanatory ancestors’ of other facts, in the sense that they directly or indirectly explain the others. He could also have set out all the necessary definitions at the start. These are not concerns about this book alone. Many works of philosophy could benefit from giving the whole game away at the start, before going on to justify the views stated. Kment’s admirable synopsis in chapter 1 doesn’t give away quite as much as it could.

The exciting claims come in the concluding chapters. We have seen how necessity, possibility and counterfactuals are connected with explanation. But this does not prove that the idea of explanation is built on top of ideas of necessity and possibility. Nor does it mean that we must use counterfactuals to define what counts as an explanation. Kment puts forward the thought that it is the other way round. We want to explain things, and we develop ideas of necessity and possibility, and the tool of counterfactual thought, in order to allow us to find explanations. The desire to explain comes first. So naturally enough, having shown how to use counterfactuals, Kment acknowledges that this tool does not always give the right answers when we use it to establish what explains what. He also notes that we sometimes have to make ad hoc adjustments to the ways in which we use counterfactuals, in order to reach sensible conclusions about what explains what.

Kment discusses how ideas about necessity and so on serve our purposes. In doing so, he writes of grades of necessity, and of wide or narrow ranges of possible worlds that we might consider. (If we pick a narrow range, it will be relatively easy for things to be necessary: they need only be the case throughout that narrow range.) This reflects our ordinary thinking. For example, when we seek to explain a rise in the stock market by considering what might have been different in the business world and what effects those differences would have had on share prices, we just take it for granted that there is a stock market in which supply and demand determine prices, that investors can move their money around, and so on. But we could go beyond this practical attitude, and consider whether necessity is merely something we have invented because we want to explain things, rather than something real that we have discovered. Kment does not take that bold step, although he does not think that facts about necessity are fundamental. But if anyone were to be inspired by this intricate and exhilarating book to take the step, then David Hume, a philosopher with whom Kment disagrees on natural laws, would allow himself a wry smile from the grave.

The Enigma of Reason by Hugo Mercier and Dan Sperber