Unfolding Reason
As Mind seeks to know itself
Freedom is Rational. 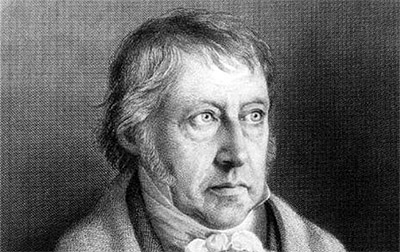 Hegel’s philosophical influence is out of all proportion to the actual value of his work, which just goes to show that writing a great deal of impenetrable prose can get you a long way.

As a young man, Hegel was initially an enthusiastic supporter of the French Revolution. Disillusioned by the failure of the revolution, Hegel determined to signal his profound sadness by never again writing in a way anyone could understand (okay, I’m speculating here, but there has to be some reason for his incomprehensible style).

History, Hegel taught, is the unfolding of the ‘Absolute Idea’ or ‘World Spirit/Mind’. Through a series of contradictions in social structures, Reason gradually but inevitably works itself out as human history, so that “the history of the world is none other than the progress of the consciousness of freedom.” With me so far? Hegel believed that by following his thinking we would one day come to know the world as it really is. This moment, in turn, would represent the historically transcendental stage when Mind – the active force driving history along – comes to know itself. Only now would we live in perfect freedom. Freedom, in other words, is attained by living rationally in a rationally ordered political state, which means living in accordance with Mind… To sum up, if you choose not to live in accordance with Reason, you are living irrationally, and History will simply flatten you as it rolls on by. Hegel also modestly believed that he had discerned the underlying structure of reality, which is the Idea as manifest across space. Our minds are simply part of Mind working itself out through time and space. As part of his self-contained, self-referential philosophical system, he also has a lot to say about politics, logic, religion, art and more besides.

As today, people in the Nineteenth Century loved this kind of thing, and crowds flocked to hear Hegel speak. He was, alas, stopped dead in his historical tracks in 1831 by cholera. Perhaps this was History’s way of flattening an irritating, if not irrational, philosopher.

Terence is a peripatetic (though not Peripatetic) writer, historian and lecturer. He holds a PhD in the history of political thought from Columbia University, NYC, and lives with his wife and their dog in Wellington, NZ. He blogs at hardlysurprised.blogspot.co.nz.

The Future of Hegel by Catherine Malabou

Consciousness: A Play In One Act