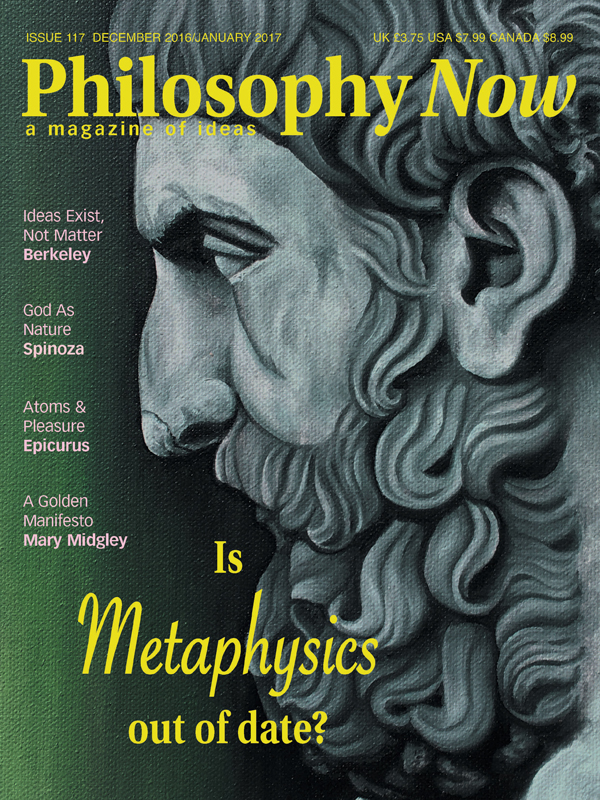 Beyond Physics No More?

Nick Inman wants to know where you’re at.

The Private Lives Of Rocks

Jon David thinks about the view that everything has awareness.

Zoran Vukadinovic thinks Spinoza could help us with our enquiries.

Mary Midgley continues her recollection of a golden age of female philosophy.

Luke Slattery argues that the ancient philosophy of the Garden offers an attractive answer to some of the challenges of the modern world.

Philosophy For The Brave

Dahlian Kirby on the benefits of existentialist counselling.

Jared Spears looks at the cometary career of a celebrity revolutionary.

To Be Or Not To Be, What Is The Answer?

The following responses to Hamlet’s big question each win a random book.

Tu Weiming is a philosophy professor at Harvard University and Chair of the Institute for Advanced Humanistic Studies at Peking University. He is an ethicist and is one of the leading lights of New Confucianism. David Volodzko asked him about the relevance of Confucius today.

What is Metaphysics Anyway?

Peter Adamson considers Aristotle’s original use of the term.

Raymond Tallis looks into the mystery of the sense-making animal.

Tim Wilkinson answers the question Was Einstein Right? about general relativity with a “Yes!”.

Michael Burke traces the lengths to which we must go to truly love the other person.

Hegel & Hume Talk It Over

Chris Christensen watches Hume and Hegel argue about how they can have knowledge of reality.