Tim Wilkinson answers the question Was Einstein Right? about general relativity with a “Yes!”.

In November 1915, Albert Einstein revealed his theory of general relativity to the world. Almost exactly a century later, in June 2015, at the Perimeter Institute in Waterloo, Canada, a group of physicists gathered to discuss a problem: the theorists are taking over. As Perimeter director Neil Turok told New Scientist, in physics, “theory is becoming ever more complex and contrived… and yet failing to explain the most basic facts” (Issue 3028, 4th July 2015). The main culprit is string theory, the mathematics of which have become all but impenetrable without yielding a single testable prediction. Physicists wanting to grapple with these developments, and philosophers studying their predicament, could do worse than start by reading Was Einstein Right? by Clifford M. Will, Distinguished Professor of Physics at the University of Florida.

Professor Will sets out his stall early on: “Without experiment, physics is sterile, physical theory merely idle speculation” (p.13). This book is remarkable in that Will manages to remain faithful to his objective of making experiment his focus, while at the same time delivering, almost in passing, a superb explanation of general relativity, without an equation in sight. Furthermore, you’ll find here none of the hyperbolic theorising that is usually assumed to sell popular physics books. There is no fretting about what, if anything, came before the Big Bang, no untestable hooey about quantum multiverses. Instead, Will exhorts us to “focus only on observable, operationally defined quantities, and avoid unanswerable questions” (p.50).

The author’s qualifications for giving us the lowdown on experimental general relativity are impressive. A distinguished academic physicist and Editor-in-Chief of the journal Classical and Quantum Gravity, he also chaired NASA’s Science Advisory Committee for the Gravity Probe B experiment for over ten years. Gravity Probe B is arguably the most important, and certainly the most delicate, test of general relativity so far performed, and became the longest-running project in NASA’s history. First conceived in 1959 and proposed to NASA in 1961, the satellite was not launched until 2004. The results – in the affirmative – were finally announced in 2011. Unfortunately, although the experiment is described in detail, the results arrived too late to be included in this book.

Gravity Probe B heads off

The evidence-based approach to knowledge yields a treasure-trove of ideas for anyone interested in the philosophy of science.

It is generally accepted by philosophers of science that scientific theories can never be finally confirmed. For starters, the past may not be an absolutely reliable guide to the future, so that what has been observed might not be what will be observed in the future, even in the same circumstances. This is part of the problem of induction. Moreover, for any given experimental result, there might be several theories capable of predicting that result, so how do you know which is the correct theory, given that evidence? This is the so-called under-determination problem.

The answer can be partly put down to Occam’s razor – general relativity is a simpler, more elegant theory. Philosophers reading Will’s account may also conclude that Brans-Dicke Theory was a degenerative theory – it was constantly in need of tweaking to accommodate troublesome observations, without any concomitant increase in its explanatory or predictive power.

In other chapters of Was Einstein Right? we are served a banquet of food for thought on the relationship between positive evidence – observations that conform with what a theory would predict – and confirmation that that theory is true. A single repeatable negative example – that is, an observation which goes against the predictions of the theory – will always carry more weight than any number of positive ones. In fact, a repeatable negative observation will, generally speaking, falsify the theory under scrutiny. However, in some approaches in the philosophy of science (such as those incorporating Bayesian probability), positive evidence should count for something, especially when the observation concerned would be extremely surprising without the theory in question predicting it. As Will shows, some of the predictions of general relativity are so surprising as to be almost unbelievable, but have been verified by observations nonetheless. For instance, when setting out the implications of general relativity on the bending of light rays, the effect of gravity on clocks, and the motion of Mercury around the Sun, Will clearly, carefully, and convincingly explains why calculations done using Euclidean geometry and Newton’s ideas of gravity will produce different results to general relativity. He then leads us through decades of experiments designed to test general relativity’s predictions. Because the experimental difficulties and uncertainties are placed front and centre, students of the philosophy of science will find it entertaining and illuminating to relate their ideas to the episodes described. As a source of material for such an exercise, Was Einstein Right? fares better than many texts written specifically for that purpose.

There is still one major prediction of general relativity yet to be properly tested: gravity waves. Will explains how these arise from the theory. Importantly, from a scientific point of view, gravity waves are a specific, quantifiable, and in principle measurable prediction. The theory is therefore susceptible to falsification. Since the mid-1970s, the existence of gravity waves has been inferred indirectly from the movement of binary pulsars. However, in early 2016 direct detection of them was announced in a paper published in Physical Review Letters (PRL 116, Feb 2016). Sadly, this was much too late to be included in the book, but it will be interesting to watch the story unfold in this still nascent area of observational astronomy.

Brush Up Your General Relativity

In addition to its value as raw material for philosophical reflection, Was Einstein Right? should prove an extremely profitable read for students of the philosophy of science wanting to get to grips with this important pillar of physics.

For example, Will takes his time in explaining the crucial importance of the principle of equivalence. Broadly, this is the idea that people in equivalent types of motion will experience the universe in the same type of way. For instance, it says that things appear (locally) the same to an observer in free-fall as they do to an observer who is not under the influence of gravity. Will further explains why any theory that respects the principle of equivalence (such as Brans-Dicke Theory) will automatically make many of the same predictions as general relativity, such as the effect of gravity on clocks, and the curvature of space. 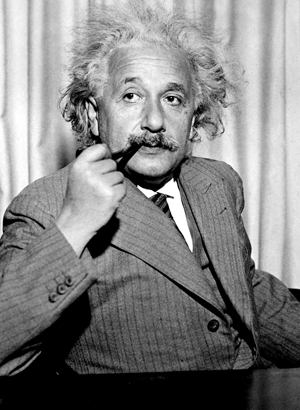 Speaking of curved space, Will invites us to consider an enormous triangle, half the size of the Solar System, with the middle of one side passing close to the Sun and the opposite vertex somewhere out near the orbit of Pluto. From our perspective, the sides of this triangle are perfectly straight along every part of their length. However, general relativity would predict that due to the mass of the Sun, the interior angles of this triangle would add up to 179°, 59’, 59.125” – which is 0.875 arcseconds less than the 180° that would be the case if space were everywhere Euclidean. Conclusion: matter literally bends space.

Such a large triangle is unlikely to be drawn any time soon; but long baseline radio interferometry (using radio telescopes a great distance apart) provides a very accurate way to measure the same angular discrepancies. These measurements have confirmed the predictions of general relativity with a precision of 0.1%. Space is indeed curved.

Spacetime is curved too. Now, using geometry to represent time, let alone curved spacetime, is a few levels of abstraction up from using geometry to represent space. However, since Descartes introduced us to coordinates in the Seventeenth Century, we have been able to use mathematics to represent anything that can be quantified, including time. Geometry, which since the Nineteenth Century includes non-Euclidean (curved space) geometries, can then be brought to bear on our physical concepts, including spacetime. Describing curved, non-Euclidean spacetime without using mathematics is a considerable challenge, but Will still manages to give the reader a decent flavour of what’s going on.

The only criticism of Was Einstein Right? I can muster is that it is desperately in need of a Third Edition. We now have the results of Gravity Probe B, and the latest detectors are approaching the sensitivity needed to routinely observe gravity waves without the need for a conveniently nearby supernova. But this is a minor gripe. Although more educational than popularising, as an exposition of general relativity which avoids the underlying mathematics, I have never come across the equal of Was Einstein Right? The presentation of the theory in the form of engaging real-life historical episodes makes it more of a page-turner than it has any right to be. Compared to the full-fat mathematical version of general relativity I learned as an undergraduate, I have no hesitation in saying that in many respects, the fascinating tales in this book are far more rewarding. Will’s clear writing and breezy enthusiasm make this an enormously agreeable way to pick up the basics of general relativity, and an indispensable resource for reflection on its philosophical ramifications.

Tim Wilkinson has a PhD in pure maths.

The Structure of Musical Revolutions

The Philosophy of Scientific Revolutions