Ian Fishback argues that torture should never be allowed in practice.

At one time international recognition of a right against torture was considered one of the best, if not the singularly best, triumphs of the human rights regime. However, since the US implemented its enhanced interrogation program in the wake of the terrorist attacks of 9/11, the consensus of a human right against torture seems to be in tatters. The new President of the United States and his choice for National Security Advisor have both endorsed interrogational torture, and a majority of Americans support using interrogational torture on suspected terrorists (Chris Kahn, Reuters, 30 March 2016; see reuters.com/article/us-usa-election-torture-idUSKCN0WW0Y3). What was once unquestionably taboo is now largely a matter of partisan politics. Apparently robust signs of widespread support for the legal prohibition of torture, such as the UN Convention Against Torture and Other Cruel, Inhuman or Degrading Treatment, now seem hopelessly vague. The demarcation between torture and ‘cruel, inhuman or degrading treatment’ remains both controversial and fundamentally important, since if an act is categorized as ‘torture’ it is always illegal, but if it is categorized as ‘cruel, inhuman, or degrading treatment’ it can sometimes be legal in some countries if it can be shown to be instrumentally necessary.

Perhaps as a result of the contours of the political and legal debate, ethicists thinking about this issue seem preoccupied with explaining whether or not torture is so bad that it ought to be categorically prohibited regardless of its efficacy. The fault lines tend to be between deontologists and consequentialists. Deontologists – ethical theorists who maintain that actions are right or wrong independent of the consequences – tend to advocate an absolute in-principle human right against torture. Absolute in-principle claims such as this assert that certain acts are so wrong that they cannot be justified under any circumstances, regardless of the consequences. And if an act is absolutely prohibited in principle, then it follows that it must also be absolutely prohibited in practice. On the other hand, consequentialists – ethical theorists who hold that consequences determine the rightness or wrongness of actions – tend to advocate a human right against torture that admits of both in-principle and in-practice exceptions. A third camp admits the possibility of an in-principle justification for torture while denying the possibility of an in-practice justification. Here I want to support this third camp, and argue that the human right against torture and cruel, inhuman, and degrading treatment is best understood as admitting of a necessity justification in-principle which however cannot be satisfied in practice. 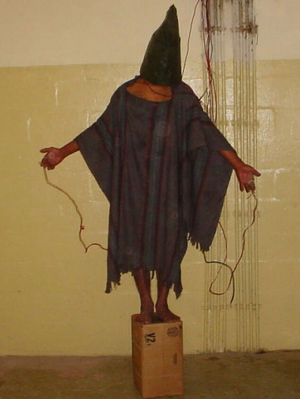 Many people assert that torture is absolutely in-principle morally wrong because it is a particularly egregious violation of human dignity. However, just because something is particularly bad does not mean that it cannot be justified in any circumstance. The view that torture ought to be prohibited absolutely in principle is especially problematic for those who acknowledge that war can be justified in principle. Given that war inherently involves widespread suffering, exploitation and violations of autonomy, it is hard to acknowledge an in-principle right to war without acknowledging an in-principle right to torture as well. As a matter of consistency, advocates on an in-principle prohibition of torture should probably be pacifists.

War can only be justified, if it ever can be, on the grounds that large-scale violent coercion of a morally-innocent enemy civilian population (which is what war usually involves) is necessary to preserve the greater good. But it seems that in principle this basic ‘lesser evil’ justification could equally apply to interrogational torture in counterterrorism operations. This raises a fundamental challenge for those who claim that war can be justified in practice but torture cannot: Is torturing one innocent person really worse than the harms inflicted on many innocent people during the course of a war? If wars can be fought in order to protect innocent people, then why not also allow torture in order to protect innocent people? But this analogy might not carry through for in-practice justifications for torture compared with war.

The critical move of those who advocate the admissability of torture, is to think of in-principle hypothetical cases, and then to say these principles apply to actual cases. ‘Ticking time-bomb’ scenarios often fulfil this role. The harrowing scenario is of an imminent terrorist attack that threatens thousands, if not millions, of lives; say, of a dirty bomb hidden somewhere in a city. Authorities detain a culpable terrorist who has information that could prevent the attack, but the detainee will not willingly divulge the information. Torture is the only way to coerce them to provide the information in time. Therefore, torture is the only means capable of stopping the attack, and saving many innocent lives. Surely, if torture is the only way of coercing a culpable terrorist to give up information that can save millions of lives, then that justifies its use?

However, one might agree with this reasoning and yet deny that such ticking time-bomb cases ever actually exist, or at least argue that they have an extraordinarily low probability of occurring. Critics like me of the use of hypothetical ticking time-bombs to justify torture, say such thought experiments fail to apply to real life because they add or leave out features common to actual cases. For example, in reality authorities often mistakenly detain innocent suspects; guilty and innocent detainees alike frequently lack the information authorities need to act effectively; and acquiring information through torture may take too much time to facilitate effective action. Thus, the existence of an in-principle justification does not entail the existence of an in-practice justification. This means that torture could be absolutely prohibited in practice even though it can be justified in principle. Therefore, we argue that there are no in-practice justifications for torture in the real world.

The problem with the ticking time-bomb debate for advocates of the sometimes-admissability of torture is that it focuses on the wrong type of case. The strongest argument for interrogational torture is not that it is an effective means to thwart specific enemy terrorist attacks, but that it is an effective means to attack enemy cells. French counterinsurgency operations in Algeria against the FLN in the 1960s are commonly thought to be the best example demonstrating this.

This case was actually part of my military training as a US Special Forces officer. In 2004, I was part of a small group of fifteen junior officers under the tutelage of a more senior mentor. The mentor had us watch The Battle of Algiers, a movie that depicts the French occupation of Algiers. It shows French paratroopers using interrogational torture to destroy the FLN terrorist network. Our mentor then articulated the supposed efficacy of torture as a method for defeating urban insurgent organizations that rely on cellular organization for protection.

Urban insurgents, which include many terrorist organizations, divide their organization into a hierarchy of cells. The lowest level of cells carry out the tactical tasks that have the greatest risk of capture, such as placing bombs. Members of each cell only know their immediate leader in the cell so that they cannot provide information about the higher levels of the organization, and even that limited information has a narrow time-horizon of usefulness. The leader of the cell will go into hiding as soon as he or she learns of a subordinate’s capture. Therefore, a counterinsurgent force has a very short time in which to use a detainee’s information to target the detainee’s associates. One way to destroy the highest levels of the organization is to consecutively exploit several detainees in this manner, swiftly working up the insurgent chain-of-command. ‘Soft’, rapport-building interrogation techniques take far too much time to facilitate such a campaign, but as the French supposedly demonstrated in Algeria – the lesson our mentor tried to impress upon us – interrogational torture is fast enough to facilitate it.

My concerns with our mentor’s argument are rather straightforward: the French lost the war in Algeria, and it is even harder to use interrogational torture in contemporary counterterrorism operations than it was in the Sixties.

The instrumental value of interrogational torture in rooting out the FLN is questionable; but even if it was instrumentally valuable, it did not translate into strategic success. And since hundreds, if not thousands, of innocent Algerians were tortured as part of the campaign against the FLN, arguably, this activity undermined the French war there. Algerian support for French rule crumbled, and the FLN won the political battle, which is the end that terrorism and war are ultimately aiming to achieve. So one question that French interrogational torture in Algeria raises is: Do the tactical benefits of interrogational torture outweigh the strategic costs?

They clearly did not do so in Algeria, and there is even less reason to believe that they do in contemporary counterterrorism campaigns. Urban insurgents learned from the FLN experience, and have adopted countermeasures to foil the speed of interrogational torture. Now Al Qaeda operatives are selected and trained to resist interrogational torture, and we have every indication that this training is effective. For example, Khalid Sheikh Mohammed, a high-ranking Al Qaeda leader captured by US Forces, was waterboarded more than seventy times before he provided information. It’s possible that he ‘cracked’; but it is at least as likely that he endured waterboarding until he thought the information he relinquished was no longer valuable enough to justify his withholding it. This would be precisely what Al Qaeda trained him to do.

There is scant evidence that interrogational torture has been instrumental in the defeat of Al Qaeda or other terrorist organizations. On the other hand, there is ample evidence that interrogational torture, and cruel, inhuman, and degrading treatment, such as occurred at Abu Ghraib and Bagram, yielded significant strategic costs in the US-led counter-terrorism efforts against Al Qaeda.

Proponents of interrogational torture claim that the Abu Ghraib events were the result of ‘a few bad apples’ rather than a necessary side-effect of the enhanced interrogation program. This argument is specious. The prisoner abuse at Abu Ghraib and elsewhere was not the product of a few rogue soldiers. Rather, it was the predictable result of removing safeguards against detainee abuse in a combat environment. The sad fact is that combat produces psychological stress likely to motivate torture and the cruel, inhuman, and degrading treatment of prisoners. It has been shown that soldiers do not need commanders to issue orders to torture in order to commit acts of torture. Rather, soldiers need commanders to issue orders that prevent them from committing acts of torture. Normal human beings placed in combat circumstances may be liable to torture unless institutions shape their behavior.

Ian Fishback is a former U.S. Army officer with four combat tours. He took a stand against torture, eventually writing a public letter in 2005 to Senator John McCain explaining his concerns about abuse of detainees. From 2012-15 he was an Instructor at West Point. He is now a PhD student in Philosophy at the University of Michigan.