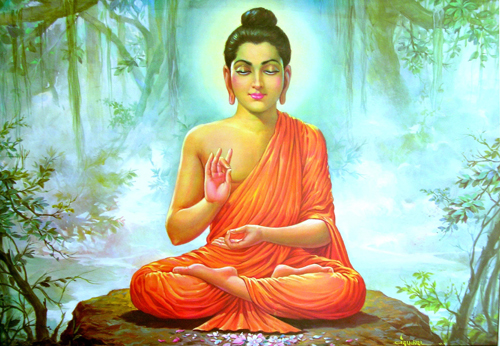 Throughout his youth, Siddhartha Gautama was just your typical humble North Indian prince growing up in luxury and splendour and shielded from suffering. Inevitably, given this upbringing, he was shocked to discover the suffering and death of ordinary people beyond the palace walls. So at age twenty-nine he decided to give up the trying existence of a prince in favour of the simpler life of a wandering seeker after truth. He ditched not only his wealth and the creature comforts wealth brings, but his wife and son also (incidentally, he’d named his son Rāhula, meaning fetter – make of that what you will), and took to the road as a wandering ascetic (sort of like a wandering minstrel, but not as much fun). But after several years of wallowing in austerity, denying his body sometimes even to the point of starvation, he decided that this wasn’t the answer either. Then, while sitting under a Bodhi tree, perhaps wondering if he’d made a terrible mistake giving up his riches, he experienced an epiphany, or more properly, a moment of enlightenment; and so was born the Middle Way. Thus did the prince become the Buddha – meaning, the enlightened one: and verily did he seek to spread the word that, however you look at it, life is just one long painful moment. The first ‘noble truth’ of Buddhism is that the fundamental character of life is suffering. Lest you find this a tad dreary, the good news is that by achieving nirvana we can escape this vale of tears. And to achieve nirvana? All you have to do is cease desiring, since it is desire that causes the suffering. And you can achieve that by following the Middle Way. That’s it. As a promise of salvation, you might think that no one would go for it; but several hundred million Buddhists would beg to differ.

Terence is a writer, historian, and lecturer, and lives with his wife and their dog in Paekakariki, NZ. hardlysurprised.blogspot.co.nz.

The Monk and the Philosopher by Jean-François Revel & Matthieu Ricard

Is The Buddhist ‘No-Self’ Doctrine Compatible With Pursuing Nirvana?

Why Buddhism Is True by Robert Wright

Is Karma a Law of Nature?