Can Confucians Have Friends?

Peter Adamson says the bonds of friendship are virtuous.

One of the more arresting claims Aristotle makes in his famous exploration of friendship in the Nicomachean Ethics is that you can’t be friends with god. His reasoning is that friendship requires equality, and the gods are vastly superior to us. The argument is a plausible one: it seems difficult or impossible to be friends with a boss, mentor, or teacher in quite the way that one is friends with one’s peers and equals. Indeed we might say that friendship is distinctive precisely in being non-hierarchical. If I am truly your friend, what I am to you is exactly what you are to me.

This thought has been supposed to cause trouble for the followers of Confucius. Confucianism was China’s most influential philosophical tradition for well over two millennia. Its ethical teaching has at its center several hierarchical relationships that were intrinsically bound up with forms of propriety, including rituals. The second most famous Confucian thinker Mencius (372-289 BC) identifies five ‘cardinal relations’, four of which are clearly hierarchical: ruler and subject, father and son, old and young, and husband and wife (Aristotle too sees the latter as an unequal relationship). The odd relationship out is friendship. Friendship seems to fit badly with the Confucian idea of modeling human relationships on family bonds. One possible comparison, which sees friends as having a bond like that between older and younger brother, would not secure the symmetry we’re looking for. Friendship is also anomalous among the cardinal relations in lacking ritual prescriptions, and in being voluntary. You don’t choose your father or (at least in ancient China) your ruler, but you do choose your friends. 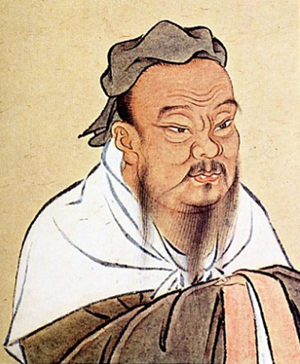 Confucius (551-479 BC) would also have had some reason to think that friendships should be unequal. For him the purpose of friendship is the cultivation of virtue. It seems a natural thought that we should therefore befriend those more excellent than us, so as to learn from them. Yet like Aristotle, Confucius insists on symmetry in true friendship, advising, “do not have as a friend anyone who is not as good as you are.”

It’s been argued that in light of this latter rule, Confucius himself could never have made friends at all. His disciples were certainly dear to him, as we see from a passage in his Analects, when he openly grieves for one of them who has died. But does that mean he was this disciple’s friend? David Hall and Roger Ames would say not. In their book Thinking Through Confucius, they asserted, “Confucius is peerless and hence, friendless. To assert that Confucius had friends would diminish him.” His relation with his students was arguably more akin to a hierarchical, familial one, as shown by the fact that he referred to them as his xiaozi, meaning ‘little masters’, or ‘sons’.

In keeping with the equality of friendship, Confucius identifies trust (xin) as its distinctive attitude, whereas a familial relationship would be characterized by an asymmetrical virtue such as filial piety (xiao). Confucius would thus discourage parents from trying to befriend their children, a common trend in modern-day family life. Just as a father cannot be the teacher of his son because their relation is too intimate, so being overly familiar is no way to be familial.

But how exactly do I cultivate excellence by befriending someone who is equal to me? After all it would seem that I have nothing to learn from my moral peer, at least not in the way Confucius describes in this passage from the Analects: “in strolling in the company of just two other persons, I am bound to find a teacher. Identifying their strengths, I follow them, and identifying their weaknesses, I reform myself accordingly.” Instead, it must somehow be that sharing with equal others in the excellent moral life, or at least in the pursuit of virtue, is itself a spur to the good life, or even a constitutive part of it.

Confucius seems to have been convinced that this is so. For one thing, no less than other relationships, friendship gives us an opportunity to exercise virtue. Confucius himself aimed “to bring peace to the old, to have trust in my friends, and to cherish the young,” and in advising us on examining our own character he speaks of reflecting on whether we have always kept our word with our friends. Friendship is also a source of delight, as is made clear in this line from the opening passage of the Analects: “to have friends [peng] come from distant quarters: is this not a source of enjoyment?” Yanguo He informs us that the word peng has a strong implication of ‘like-mindedness’, and may especially indicate the bonds between the students gathered around one master.

This is a hint towards a deeper importance of friends, namely that they are embarked with us upon a joint project of self-cultivation. We do not improve morally by looking to friends as a model for imitation, as we might with a superior. Rather, our affection for them is based on a recognition that they share with us our greatest pursuit. To illustrate this idea, the scholar Xiufen Lu gave the example of the tale of Bo Ya, a musician whose mastery was fully appreciated only by his friend Zhong Ziqi. When Zhong died, Bo Ya smashed his instrument, on the grounds that playing without being understood is pointless.

Likewise, Confucius occasionally complained about being unappreciated by the morally inept. This may come as a surprise, but is simply the counterpart of the joy he took in associating with those who shared his values. Birds of a feather really do flock together, ideally by taking wing towards the heights of virtue.