The Original Meaning of Life

Stephen Leach and James Tartaglia investigate where the idea of the meaning of life originated.

What is the meaning of life? In the twentieth century most analytic philosophers either ignored the question or dismissed it as meaningless. This may be largely attributable to the influence of the school of thought known as logical positivism. Continental philosophers were always somewhat more tolerant of the question, even though they rarely put it in those familiar terms; Heidegger came close, however, with his discussion of the meaning of ‘Being’.

The logical positivist idea that the question is meaningless seems to have filtered into the public consciousness with the idea that what is most bewildering about the question is not how it should be answered, but rather what it is asking. Douglas Adams picked up on this nicely in The Hitchhiker’s Guide to the Galaxy, with his plot about the planet Earth being a supercomputer designed to work out what the question means – the answer having been much easier to determine. (For the few people reading this who won’t know, the answer is 42.)

The Beginning Of The Meaning Of Life

It is all the more surprising, then, that the phrase ‘the meaning of life’ has not always been with us. In fact, it has a specific historical origin. Its immediate predecessor was the German phrase ‘ lebenssinn’ (‘life’s meaning’), which occurs in a letter of 9 July 1796 from Johann Wolfgang von Goethe to Friedrich Schiller. Goethe had just published Book VII of his novel Wilhelm Meister’s Apprenticeship, and was defending himself from Schiller, who had been urging him to make his philosophy more explicit. Goethe refers to the indenture which Wilhelm Meister receives from the mysterious Society of the Tower – a contract to bind his conduct as he performs a task for the Society. Goethe says that if he had not been forced for artistic reasons to cut short the ‘Indenture’ section, then he would have gone on to make pronouncements on life’s meaning. As it is, according to Goethe, it talks mainly about art (although modern readers might disagree with him about that). Indeed, the first sentence echoes Hippocrates’ first aphorism, in which the ‘art’ in question is that of the physician:

“Art is long, life short, judgment difficult, opportunity transient. To act is easy, to think is hard; to act according to our thought is troublesome… It is but a part of art that can be taught; the artist needs it all. Who knows it half, speaks much, and is always wrong; who knows it wholly, inclines to act, and speaks seldom or late… Words are good, but they are not the best. The best is not to be explained by words… No one knows what he is doing, while he acts aright; but of what is wrong we are always conscious. Whoever works with symbols only, is a pedant, a hypocrite, or a bungler. There are many such, and they like to be together. Their babbling detains the scholar: their obstinate mediocrity vexes even the best. The instruction which the true artist gives us, opens the mind; for where words fail him, deeds speak. The true scholar learns from the known to unfold the unknown, and approaches more and more to being a master.”

Wilhelm Meister’s Apprenticeship was closely and avidly read by poet, literary critic and philosopher Friedrich Schlegel (1772-1829), who thought the three greatest phenomena of his age were the French Revolution, the philosophy of Johann Gottlieb Fichte, and Wilhelm Meister. Another admirer of Wilhelm Meister, at least initially, was Schlegel’s close friend, the philosopher and novelist Novalis (1772-1801). It was Novalis who was, to the best of our knowledge, the first to use the phrase ‘ der sinn des lebens’ – ‘the meaning of life’. In a manuscript composed between late 1797 and mid 1798 he wrote that: “Only an artist can divine the meaning of life.” Then in 1799 Schlegel became the first to bring sinn des lebens into print. He did so towards the end of his philosophical novel Lucinde:

“Now the soul understands the lament of the nightingale and the smile of the newly born babe, understands the deep significance of the mysterious hieroglyphs on flowers and stars, understands the holy meaning of life as well as the beautiful language of nature. All things speak to the soul and everywhere the soul sees the loving spirit through the delicate veil.”

Whether Schlegel was influenced by Novalis or whether he was directly influenced by conversations with Goethe and Schiller is difficult to say. This was a tight-knit group, centred around the university of Jena.

However, although Schlegel’s friends Fichte and Friedrich Schleiermacher (part of the group) praised the novel in the highest terms, Lucinde was not an immediate success. Many thought it pornographic; indeed, closer to our own time, Isaiah Berlin dismissed it as “a pornographic novel of the fourth order.” It is therefore no surprise that the phrase ‘der sinn des lebens’ did not immediately catch on. It was only after a second edition was published in 1835 that the phrase began to occur more frequently. In 1843, it is there in Danish as ‘Livets betydning’ in Kierkegaard’s Either/Or, which contains a section that parodies Schlegel’s Lucinde, thus beginning the phrase’s long association with existentialist philosophy; and once Schopenhauer’s cosmic pessimism became a hot topic of debate it began to spread more widely in German philosophy too (although Schopenhauer himself did not use the phrase). Meanwhile in 1833-34 Thomas Carlyle published Sartor Resartus in serialised form; and it was in this highly influential novel, itself partly a parody of German philosophy, that ‘the meaning of life’ entered the English language. Carlyle took the phrase from Lucinde. He was a great admirer of the early German Romantics, and of Fichte, Schlegel, and Novalis in particular. 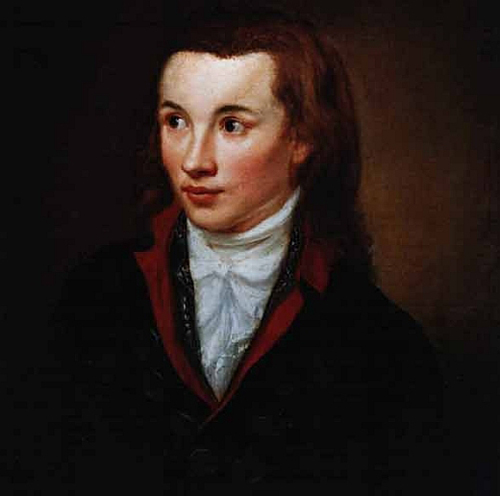 Novalis, the first person known to have used the phrase, ‘The meaning of life’

Creating The Meaning Of Life

With regard to the general philosophical background, we must pay heed to Fichte’s place in the story. Although he did not use the phrase himself, both Novalis and Schlegel had been his pupils, and Fichte was preoccupied with the relationship between life and meaning in his most accessible work, The Vocation of Man (1799). Fichte wished to go beyond Immanuel Kant’s philosophy by arguing that the nature of things-in-themselves – that is, the nature of reality as it exists independently of our experience of it – can be known, and in a sense, created by our own will, as a manifestation of the infinite will. It is this idea that Novalis picks up on in his idea that “only an artist can divine the meaning of life.” The meaning of life can be divined, in Novalis’ view, because it is artistically created. We ourselves write the book of life. “Life must not be a novel that is given to us, but one that is made by us.” So whereas in the thirteenth century Bonaventure had urged us to read the book of life, Novalis, in the final years of the eighteenth century proclaimed his intention to write it.

Many have seen this view as implying solipsism or nihilism. And in fact, the views of the early Romantics do seem to us to ultimately amount to nihilism; for if we must fabricate our own meaning, this suggests there is none ‘out there’ to discover – unless, as the Romantics thought, our creation is to be guided by faith. (Interestingly, the word ‘nihilism’ was first used in its modern sense – the sense of there being no meaning of life – in 1799 in an open letter written to Fichte by Friedrich Jacobi. Thus, both the ‘meaning of life’ and ‘nihilism’ in its modern sense made their debuts in print in 1799.)

Both Novalis and Schlegel associated faith with romantic love. For Novalis, romantic love is “the key to the world and to life.” In romantic love we hope to merge dream with reality. In Novalis’ unfinished novel Heinrich de Ofterdingen (1802) the attainment of this ambition is symbolised by a blue flower. Given the central importance of romantic love in his philosophy, the blue flower might also be taken to symbolise yearning for the meaning of life. (Some have argued that the flower’s colour was inspired by Goethe’s colour theories, but we suspect the principal inspiration may have come from Schlegel’s interest in Buddhism. In Buddhist iconography the partially open blue lotus symbolises expanding wisdom.) Novalis’ novel was originally inspired by Wilhelm Meister, but in 1800 Novalis began to express reservations about Goethe’s novel. In his view the eponymous hero was overly concerned with the prosaic business of earning a living as opposed to the pursuit of artistic inspiration.

The idea that we must make our own meaning in life seems now to be more widespread than ever, and the contemporary idea philosophically seems to be not that different from that of Novalis and Schlegel. There is, of course, still widespread support for the idea that romantic love is “the key to the world and to life” – that idea has been unavoidable in popular culture ever since the 1960s; in most popular music, for example. Moreover, to judge by the elevated social status contemporary society gives to commercially successful artists, one might even suspect that there still exists some support for Novalis’ elitist contention that “only the artist can divine the meaning of life.” There are therefore two surprising elements to the story: the relatively recent origins of the phrase ‘the meaning of life’, and the similarity of contemporary ideas to those of the final years of the eighteenth century when the now familiar phrase was coined.

The original meaning of ‘the meaning of life’ seems to have survived and prospered. That is not to say we should unthinkingly accept our inheritance. Not at all: we should be aware of its origin, but we should also be aware that the meaning of life has a prehistory. Questions about the ultimate context, purpose and value of life were all discussed for thousands of years avant la lettre. Nonetheless, if we look at the etymology of ‘the meaning of life’ – that subject that makes philosophers of us all – and also at the origins of the idea that we create our own meaning, then we must conclude that it was in Jena, in the final years of the eighteenth century, in the circle of Goethe, Schiller, Schlegel and Novalis, that the modern era began.

Stephen Leach & James Tartaglia are the editors of The Meaning of Life & the Great Philosophers, soon to be published by Routledge.