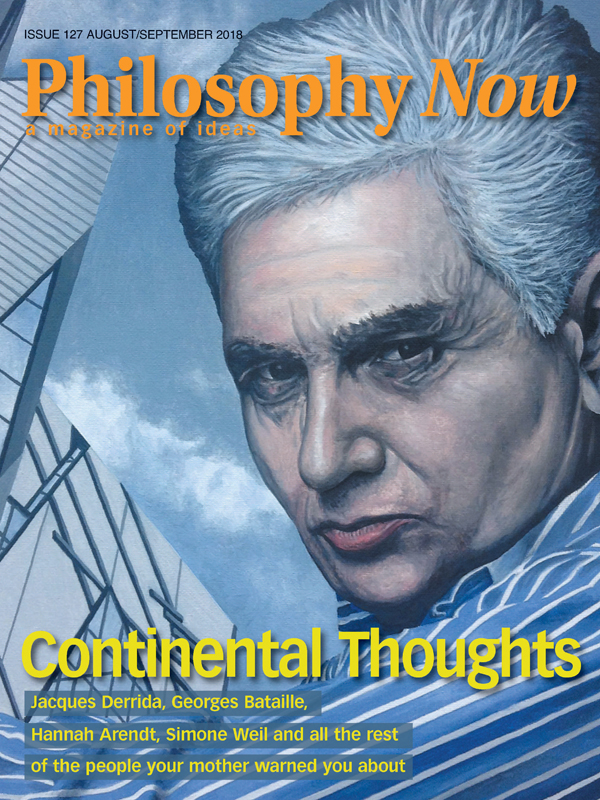 The Concept of the Other from Kant to Lacan

Peter Benson looks at how continental minds see how we see other minds.

What is Derrida Saying to Us?

Mike Sutton gives us his present interpretation of Derrida’s traces.

A Radical Cure: Hannah Arendt & Simone Weil on the Need for Roots

Scott Remer thinks we arendt happy without a community and considers the complete reconstruction of the modern world to be well worth weil.

Michael Mocatta finds a practical aid for recovery from addiction in a philosophy of extreme experience.

In the first part of our mini-series on moral education, Michael Hand considers whether schools should be involved in trying to make children moral.

Sandy Grant dares to doubt them.

Free Will in the Age of Neuromodulation

Nayef Al-Rodhan explores some of the implications of our increasing ability to chemically and technologically alter our moods and thoughts.

Miguel van der Velden invites us to consider the philosophical ideas of the world’s many Indigenous communities.

Jack Allen considers the influential ideas of a medieval philosopher-monk.

What are the Moral Limits of Free Speech and Action?

Friendly Fire • More Than A Review, A Philosophy • Is Physicalism Wrong, Though? • Barking Up A Different Tree • Heidegger’s Hate Mail • Moral Guardians

The Wisdom of Frugality by Emrys Westacott

Mark Waller finds out with Emrys Westacott that the simple life is not so simple after all.

by Bill Thomas and Rob Thomas

Which Is To Say

The Parable of the Ultimate Computer

Michael Langford computes the future of computing the future.