The Other Side of the Coins

Peter Adamson on the philosophical edge of numismatics.

As a kind of test case, I suggest thinking about numismatics – the study of coins. Yes, coins! Especially old ones, such as you’ve probably walked past in museums on your way to view more obviously interesting artefacts. Historians love them because, like clay pots and stone inscriptions, they are among the few physical objects that can survive for millennia, and be dated quite specifically. But why would a historian of philosophy care about coins?

Well for starters, coins are themselves philosophically fascinating, because of the different ways they embody value. We now think of money as precious only by custom or decree: if you melt down a Euro coin you won’t get a Euro’s worth of metal. But back in the day, coins were assumed to have the value of the precious materials from which they were made. One of the first theoretical works about the nature of money, written by Nicole Oresme in the fourteenth century, urged the king of France not to debase currency by adding in base metals, so creating a gap between its customary value and its ‘true’ value. In this Oresme anticipated ‘Gresham’s law’ that “bad money drives out good”. When debased currency is introduced, older, purer coins are hoarded, or taken abroad, to exploit their higher gold and silver content. And long before then, in Classical Greece, Cynic philosophers showed their understanding of the powerful link between custom (nomos) and the value of coinage (nomisma) by comparing their own philosophy of social critique to ‘defacing the currency’.

Coins issued at a specific time and place can be philosophically revealing in other ways too. When rulers choose the images for the coins of the realm, they convey the ideology by which they justify their rule. Thus medieval Christian coins have Christian religious imagery on them, whereas the Roman Emperor Augustus put his zodiacal sign on the coins. In both cases, citizens were able to hold a whole theory of legitimacy in their hands. Where the Christian kings were appointed by God, Augustus’ rule was a decree of Fate – an idea also conveyed by a propagandistic anecdote in which the young Augustus consulted an astrologer, who simply fell down in awe when he saw what the horoscope foretold. Or consider the occasional appearance of women on coins, as with Empresses of Byzantium. Their depiction on currency is used by historians to track the extent to which women were able to overcome cultural attitudes towards gender as they claimed and wielded power. 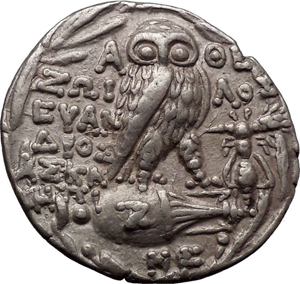 Historians of philosophy spend a lot of their time thinking about the transmission of ideas between cultures, and if you want to know about cultural exchange it helps to know about coins, although admittedly, coins travel more easily than ideas. There have been remarkable finds of coinage from the Islamic world in early medieval England, whereas there is no evidence of influence of Islamic philosophy on early English philosophy (which did exist, by the way: Alfred the Great translated Boethius into English, for instance). But numismatics can also shed additional light on the exchanges that did happen, or may have happened. For example, Islamic coins were imitated by the Byzantine mints, in a sign of the openness of Eastern Christian culture to influence from its chief antagonist. And if I were trying to persuade you that Greek and Indian philosophy influenced one another, the first thing I’d do is show you an image of the ‘Indo-Greek’ coins from Bactria (Afghanistan), which sometimes have inscriptions in more than one language. It’s fascinating to see the way monarchs are depicted on coins from India, in particular how they are dressed (such as in a toga), as this can betray the cultural background of the rulers – or at least the background they wanted to claim for themselves. The religious trappings of coinage also provide information about the dominance of Buddhism, or a given branch of Hinduism, under any given Indian ruler. This is of evident importance for the study of philosophers who lived in that time and place.

So closely tied are the circulation of ideas and of money that the emergence of philosophy itself has been connected to the first coinage. You might assume that it’s just coincidence that the earliest philosophers, the Milesians, lived just as coins came into being in the seventh century BC, in the area where coinage was invented (Western Turkey). But scholars such as George Thomson and Richard Seaford have argued that it’s no coincidence at all. Money encouraged a certain kind of society, fluid in its exchanges and more advanced in its thinking. Unlike exchanging a cow for three goats, buying something with a coin implies a certain level of abstract thinking – the kind of thinking on display in the earliest Greek philosophy. How apt, then, that our very first substantial surviving fragment of Pre-Socratic philosophy uses a monetary metaphor to describe the whole cosmos: Anaximander said that when things come to be and perish, “they pay penalty and retribution to one another for their injustice, according to the assessment of time.”

Does Western Philosophy Have Egyptian Roots?