Am I Dreaming? by James Kingsland

Quite often I judge a book on how long a list it produces. This list is comprised of things I found in it which merit further exploration. Having turned the final page of James Kingsland’s Am I Dreaming?, the list it generated not only includes academic papers and books, but also music selections curated for psychedelic experiences, and instructions for self-hypnosis and lucid dreaming. (I tried the lucid dreaming technique, but as of yet to no avail. I’ll persevere nonetheless, as there does seem to be something to it.) Aside from this list, the book offers an exposition of the intersection of altered states, neuroscience, and philosophy.

Kingsland’s previous book, Siddhartha’s Brain (2016) looked at the intersection between the insights of Buddhism and neuroscience, showing the benefits of meditation and mindfulness. In the new book he expands the scope of his investigation to include psychedelics, hypnosis, lucid dreaming, online gaming, and theories of perception, in order to show how these altered states benefit the brain, and of course its occupant, by resetting ingrained patterns of thought and behaviour. Early on we are warned that “one of the take home messages of this book is that you can’t reap the restorative benefits of sleep, or any other altered state of consciousness, without temporarily disconnecting from the reality checks that your senses and rational mind normally provide” (p.25). Having duly noted, I buckled up for the ride.

Kingsland does a wonderful job of succinctly conveying complex theories such as the increasingly-accepted prediction error processing theory of perception. In short, rather than accurately representing the world solely due to the information immediately gleaned from senses, the brain is constantly drawing on past experiences to predict what will happen next in the world, so trying to stay one step ahead by acting as an ‘inference engine’. In this respect the neuroscientist Karl Friston has my favourite quote in the book: “Perception is just hallucination that’s constrained by sensory evidence” (p.136).

The chapter on dreaming and sleep opens with frightening tales of radio competitions called ‘wakeathons’ that used to happen in the 1950s, and the horrifying fact that the world record for staying awake is 264 hours. Guinness World Records no longer lists this record as its committee recognises that trying to break this record is too dangerous and can provoke psychosis. 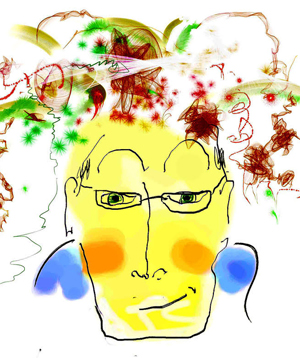 Sleep is portrayed as the body’s way of wielding Occam’s Razor “to prune the profuse neuronal connections that have sprouted during the day’s learning experiences” (p.41) – so making the brain’s processing models simpler and more efficient. Kingsland has a fascinating discussion of transcranial alternating current stimulation (tACS) devices, and how they can be used as an aide to lucid dreaming, with the potential to treat Post Traumatic Stress, Obsessive Compulsive Disorder, and even schizophrenia. The chapter closes with detailed instructions on how to dream lucidly. These instructions are certainly cheaper than the tACS device, which according to a cursory Google, costs just shy of five thousand dollars.

The following chapter focuses on video games and virtual reality. Here we learn about the brain’s temporoparietal junction (TPJ) region, and its dual role in creating our sense of embodied selfhood, and also generating our understanding of (the) minds of others. So my TPJ is the apparent source of my sense of me as an agent within a body and also my sense of other minds. One study where gamers had fMRI scans whilst playing, showed that activity in their TPJ was suppressed: “it was as if they had transferred a crucial part of their selfhood into that world, leaving their real bodies behind” (p.75). Kingsland fleshes out the potential therapeutic applications of these findings, for example using the gaming platform Playmancer, which has been developed to be used in conjunction with Cognitive Behavioural Therapy to treat conditions such as gambling disorder or bulimia nervosa.

From gaming we move on to hypnosis. The examples Kingsland gives range from a Danish study into Christians listening to prayers; the power of expectation to influence behaviour, studied using a phoney adrenaline injection; Tibetan gtummo meditation and a device known as the God Helmet. These seemingly disparate examples are masterfully sewn together for a coherent insight into the power of expectation, context, and belief of subjects for their thoughts and behaviours. Our attention is directed to the dorsolateral prefrontal cortex (the top front of your brain) and its role in executive control, or in other words, making decisions. It is this area which ‘shamans, priests, and hypnotists hijack’, apparently.

The following three chapters focus on psychedelic drugs, their mechanism of action, and their therapeutic benefits. Firstly there’s a thorough discussion of the brain’s Default Mode Network and its function in creating our narrative or autobiographical sense of self. Psychedelics essentially take this network offline, thereby causing the sense of egolessness and oneness or boundlessness one experiences on high doses. Kingsland does a marvellous job of describing the Entropic Brain Hypothesis put forth by Robin Carhart-Harris, perhaps this generation’s leading psychedelics researcher, and head of the Psychedelic Research Centre at Imperial College in London [head of the heads, then, Ed]: “A reboot may be just what’s needed to shake out the rigid patterns of thought and behaviour that characterises many mental illnesses” Kingsland concludes (p.130).

This indeed is the whole thrust of the book – learning how we can use altered brain-and-mind states to our benefit. For example, in the following chapter we meet a chap named Benjamin Mudge who is carrying out ‘autoethnographic research’ by using ayahuasca, a potent psychedelic brew traditionally used by South American shamans, to treat his bipolar disorder. It seems to be having quite a positive impact. Similarly, psilocybin, the active ingredient in magic mushrooms, has been showing some very promising results in trials carried out at Imperial College for treating depression. There’s a riveting examination of the effects of music on the psychedelic experience through the work of Mendel Kalen, also based at the Imperial College. This synergy between music and psychedelics is also a key component of studies going on at Johns Hopkins University. (By the way, some of the tracks recommended to accompany psychedelic experiences are ‘In a Silent Way’ by Miles Davis, ‘Echoes’ by Pink Floyd, ‘Adagio for Strings’ by Samuel Barber, and ‘Symphony no.3’ by Górecki.) The chapters on psychedelics close with an analysis of the neural correlates of their existentially affirming effects. In particular, the brain’s ‘salience network’, which underlies our sense of meaningfulness, is short-circuited by the psychedelic experience. This is why Aldous Huxley, whilst under the effect of mescaline, could see such meaning in normally mundane things such as the weave of his trousers.

Analysis of meditation carries on from where the examination of psychedelics lets off. Albert Hoffman, the Swiss chemist who first synthesised LSD, was convinced that psychedelics and meditation have complimentary effects. Modern neuroscience is backing this idea up. Both psychedelics and meditation effect the Default Mode Network. So rather than being two disparate methods for achieving the same end, they can be used in a complimentary fashion, as aides to one another. Kingsland goes into great detail on the eight layers of absorption, or jhanas, of Theravada Buddhism, and cites several studies into the benefits of absorption. These studies suggest that “we should learn how to tune in to our bodies, perhaps through mindfulness and meditation, with or without the help of psychedelics - and turn off our smartphones” (p.235).

Socrates argued that those who practice philosophy in the proper manner are practicing for death and dying. If this is the case, then perhaps psychedelics can play a significant part in the philosophical life. Studies in which patients with a terminal diagnosis have been administered a high dose of psilocybin yielded interesting results: “Patients who took the drug became less afraid of dying and enjoyed an increased quality of life” (p.241). Kingsland draws similarities between the liminal states of consciousness produced by psychedelics and Tibetan Bardo yoga, according to which “non-REM sleep is a training ground for death”. Historically, connections have been made between Tibetan Buddhism and the psychedelic experience: in the mid-Sixties, Timothy Leary, Richard Alpert, and Ralph Metzner published a ‘trippers’ guide’ based on The Tibetan Book of the Dead. However, not all Buddhists are happy with this connection. The fifth precept of Buddhism forbids intoxication. Kingsland quotes a monk who told him that the Buddha’s teachings, or Dharma, “is a precious pearl that should not, and cannot, be handed over to another person, let alone to a drug that can only absorb you into perceptions and feelings” (p.257). That said, Kingsland makes the claim that a truly life-altering experience, an actual challenge to one’s cognitive model of selfhood, requires more than a philosophical argument. It requires a shock of some kind. This shock can come in many forms and through many techniques, be they chemical, meditative, or technological. The benefits of taking a trek through ‘the antipodes of the mind’, to borrow Huxley’s phrase, are both manifold and empirically verifiable.

Danny Forde is currently pursuing a PhD at University College Cork on the phenomenology of psychedelic experience.

The Prisoner’s Dilemma and The Evolution of Morality

What Am I Doing?

The Elusiveness of Memory