Speak not, but say much
Eternal change is constant:
Nothing understood. 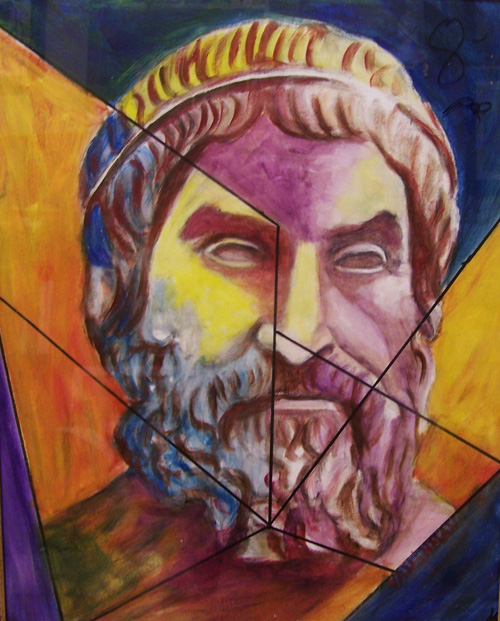 Heraclitus had a pretty dim view of humanity; so much so that he spent a great deal of time crying over it. For this reason he is sometimes referred to as ‘the Weeping Philosopher’. One assumes he was not invited to many symposia (symposium literally means a ‘drinks party’). Heraclitus was also known as ‘the Obscure’, because he enjoyed writing in an incomprehensible fashion. Phrases such as ‘Souls have a sense of smell in Hades’ don’t readily lend themselves to clear interpretation, although it is possible he simply meant it as a literal observation. It is surely no coincidence that three of the most incomprehensible philosophers of the modern age – Hegel, Heidegger and Wittgenstein – all (metaphorically) had posters of Heraclitus on their walls.

Heraclitus believed that people were sleeping-walking through their lives, when what was needed was careful introspection. To this end he states, “I went looking for myself.” It is not known if he found himself; but he did conclude that the defining feature of existence is change – ‘everything is in flux’ (panta rhei) – as summed up in his famous aphorism, “You cannot step into the same river twice.” Honestly, you can’t, give it a go.

Loathing people so much, he took to wandering alone in the mountains eating nothing but grass and herbs, which alas gave him dropsy. He sought to treat this by covering himself in cow manure, but to no avail, surprisingly.

Terence is a writer, historian, and lecturer, and lives with his wife and their dog in Paekakariki, NZ.

A Day by the Stream with Heraclitus