Given the hours your columnist has spent thinking about the nature of human consciousness, it is surprising that he has not until now paid much heed to a crucial dimension of it: attention.

The prompt for my recent switch of attention to attention itself was an illuminating paper published in Mind, Tom McClelland’s ‘The Mental Affordance Hypothesis’ (2019). ‘Affordance’ was a term introduced by the American psychologist J.J. Gibson nearly half a century ago. Gibson wanted to remind psychologists of the extent to which perception is interwoven with action. The salient part of our environment is experienced as a shifting set of affordances. Affordances are perceived items that increase the disposition to certain actions, and, indeed, may gird us up for such actions (a phenomenon described as ‘potentiation’). Artefacts are obvious affordances: they have been manufactured to serve a certain purpose. A teapot, for example, is a ‘grippable’. But naturally occurring objects may also be experienced as opportunities for action. A tree may be a ‘climbable’, or a cave may be encountered as a potential hiding place – a ‘me-hideable’.

At any given time only a proportion of the items that surround us are experienced as affordances, because most of the things in our environment are irrelevant to our ongoing concerns. The trees whizzing by the train window as I write this sentence do not invite me to engage with them. That is to say, opportunities for action depend on your current preoccupation or agenda. A book on my shelf may be promoted from mere background to an affordance when a need arises for me to consult it. The decision to climb a mountain transforms its surfaces into footholds and handholds. Affordances are not confined to individual material objects: they also include scenarios such as deteriorating weather or the crowdedness of a room.

Fans of Heidegger’s classic 1926 book Being and Time may be sympathetic to Gibson’s rejection of a tendency among psychologists to regard our mode of being in the world as merely spectatorial. To use a distinction that Heidegger elaborated, we interact with the entities in our environment not as items that are merely ‘present at hand’ (Vorhanden) but as things that are ‘ready to hand’ (Zuhuanden) – not just visible, but useable. Ready-to-hand items belong to a world of opportunity – or in Heideggerian terms, as possibility-for-me or possibility-for-us, as when I or we see something that I or we might be able to use. Alternatively, affordances may be present under the guise of necessity, as when I see something such as an onrushing elephant that I must avoid. In sum, whether an item out there qualifies as a full-blown affordance will depend on its salience to the tasks I am engaged in doing or have in mind to do. What makes McClelland’s paper of particular interest is that he extends the notion of an affordance beyond affordances for bodily actions, such as gripping, walking, eating, and fleeing, to affordances for mental actions, such as imagining, counting, and most importantly, attending.

Mental actions are mental events that are under our own control. Among events or scenarios that afford attention, McClelland distinguishes those that we attend to deliberately from others which press themselves on us and insist on being attended to. Attention to a pain or a loud bang is involuntary: we are ‘hailed’ (to use McClelland’s term) by such events. By contrast, focusing on something in response to one’s own or another’s instruction seems to be voluntary and may involve mental effort. Attention, it is clear, spans a wide zone between passive/receptive aspects of mind and active ones.

The gradient of the activeness of attention may be illustrated by vision, when we pass from involuntarily registering a flash; to looking; thence to watching; peering; scrutinizing; interrogating; and, finally, to making formal observations, including measurements. Active attention – as when we’re waiting for something to happen or someone to turn up – being on the look-out for possibilities, actively differentiates what count as information from what’s discarded as mere noise.

This is where the idea of mental affordances gets particularly interesting, because it is relevant to wider issues of human agency, volition, and the philosophy of action. The regulation of attention is necessary for the exercise of free will, and indeed for a coherent life.

Action seems to be most clearly voluntary – something that’s done – when we pay attention to at least some of its elements, namely those which are explicitly connected both with the goal of the action and the circumstances in which it is taking place. (Attention to our goals, more than anything, distinguishes action from mere reaction. The latter is closer to a happening than a doing, as when we duck to avoid a missile or jump in response to a loud bang.) But the more carefully we inspect it, the more complex appears the relation between attention and the exercise of our agency. Consider something pretty quotidian: walking to a pub to have a conversation with a friend. During the journey we’re bombarded by sensory stimuli. Only a small subset of them are relevant to our journey and count as mental affordances, seducing or requiring our attention. There will be some stimuli that force themselves upon us, but we reject them as mere distractions unless they are salient, as when a hoot warns us that we are about to step into the path of a car. Otherwise, we choose to pay attention only to that which our action demands. 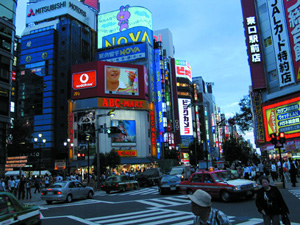 Attending to affordances whilst walking down the street.

The attentional affordances that shape, guide, or energize voluntary actions are often prescribed in advance. What makes street signs or pub names privileged mental affordances is their relevance to our goals. Behind this is a network of what we might call ‘becausations’: my going to meet you in the pub, for example, to discuss a joint plan, draws on a multiplicity of sources that make sense of the action as something that fits into my life insofar as it overlaps with yours. Our purposes shape our attention, and our choice of attentional affordances keeps us on what right now counts as ‘the straight and narrow’ as we endeavour to fulfil those purposes. If we are to respond to the unexpected but salient we must also strike a balance between focused and open attention – between inwardly regulated concentration, and responsiveness to happenstance events. Voluntary attention is dappled with inattention. Because I do not usually need to do, as consciously-intended actions, most of the movements involved in walking to the pub – maintaining my balance, putting one leg in front of the other – I don’t have to attend to most of my perceptions associated with them, unless something goes awry. The automatic manufacture of off-the-shelf steps is to be contrasted with the bespoke action of consciously navigating myself to a particular destination, in the service of a singular goal, executed with the aid of street signs that are consulted to support a decision to turn left or right or carry straight on. The distribution of attentional affordances, and the balance between doing and happening in an action, will be radically different when I am learning to walk again after a stroke (when I will need to concentrate on my balance), or when I am taking a route I could follow in my sleep (when I have no need to consult street signs). And attentional affordances will evolve during an action as we judge what has still to be done and how, and monitor our performance in ongoing actions: whether we are ‘on course’, or have arrived at our goal.

Self-manipulation is one of the most intimate aspects of the exercise of volition. Training and practice will enable us to do automatically things which at first have to be enacted consciously, painstakingly, and attentively. They are perhaps the most obvious aspects of our capacity to focus on certain things and safely ignore others. And learning how to attend in a certain way is a particularly striking expression of our capacity to position ourselves in order to exercise our freedom. It reminds us of the extraordinary extent to which we have a hand in creating the perceptual opportunities we take advantage of in furthering our interests. We can do this directly or indirectly, immediately or after an appropriate interval of time. We can set traps for our attention, ambushing ourselves with reminders to look, listen, or read. We can even manipulate the conditions for the very possibility of attention – namely, at the very least, being sufficiently awake – by a variety of means, such as pinching ourselves, taking a breath of fresh air, drinking a coffee, making sure we had a good night’s sleep, setting an alarm, or asking someone else to wake us up in the morning.

It’s easy to overlook the extent to which manipulating our own attention – obeying the strange inner command ‘to pay attention’ – is central to self- and world-control, and to the creation of an ever-increasing distance between a train of reactions driven by a torrent of unsolicited experiences and carefully tailored journeys undertaken in the interval between the womb and the tomb. Transforming your world into a source of solicited, planted, or rigged attendibilia is one of the keys to moving from a life that is a mere succession of moments, to a vita that has a curriculum.

Many ethologists have highlighted the extent to which the unique capabilities of human beings are rooted in collective attention, maintained between groups of different sizes and durations. This collective attention enables modes of cooperation and self-development unknown even in our nearest primate kin. Our public spaces are crammed with ‘notices’ that directly or indirectly solicit attention, and our communal lives require convergent attention. A striking example is what we may call ‘institutionally prescribed attention’. In my professional life as a doctor, most of my waking consciousness was directed towards attentional affordances that I was obliged to seek out, respond to, and interpret. My relatively expert, technologically-trained attention would alight on attendibilia such as elements of the history of the illness, or signs ranging from the demeanour of the patient to subtle changes in movements or the appearances of scans that might indicate neurological disease. My years of training and (alas) mistakes transformed aspects of the perceived world into ‘signs’ for me – mental affordances that would require my response and provide at the very least a first interpretation of what they might signify.

Many philosophers of mind have identified intentionality or ‘aboutness’ as a unique mark of the mental. But it is only part – the ground floor – of the story of human consciousness. Attention and its individual or shared control is intentionality in italics. It is central to the many shared worlds in which we achieve things far beyond the scope of other living creatures. Time to meta-attend to it.

Raymond Tallis’s latest book, Seeing Ourselves: Reclaiming Humanity from God and Science is out now.

The Private Lives Of Rocks

How To Be Conscious: Mind & Matter Revisited

Much Ado About Consciousness