On Not Being Someone Else by Andrew H. Miller

Alexandre Leskanich looks wistfully at all the lives he and we haven’t led.

“Nothing is of greater moment than the knowledge that the choice of one moment excludes another, that no moment makes up for another, that the cost of one moment is the cost of what it forgoes.” This quote by Stanley Cavell closes a book of admirable insight and sensitivity, attuned to an apparently simple, yet haunting, idea: that my life, or yours, could have been completely different. Perturbed by this thought Andrew Miller, who is Professor of English at Johns Hopkins University, reflects on the ability of art to approach lives we’ve never led – lives that, nevertheless, may help us reflect upon who we are.

Our lives are lived constantly forwards, each moment a point at which something else – or someone else – could have happened. Each choice I make forecloses on another. Looking back, we may try to discern the points of departure, the critical junctures, at which we diverged from one path and embarked upon another. In so doing, our unrealised possibilities, unchosen moments, and untrodden paths, trouble our sense of self. The existence of my self as I am now is a fact of such an unfathomably tiny likelihood. But still, here I am.

Having entered my fourth decade, I notice more the gradual foreclosing of possibilities that attends all lives – the foreshortening of a narrowing path leading gradually towards the end, accompanied by the understanding that this is the path I’ve chosen and I cannot go back and begin again. Our thoughts may dwell on the past in this way, frequenting its long-lost moments, seeking those points of decision or circumstance that made the difference. Had I thought differently, or believed differently, or done differently, I would not be here, now, on a London morning, typing these words, living this life – my life… When I dwell on those lives I never had, I may feel regret or relief, depending on how I view my existence at that moment. Every unlived life I reflect upon seems to diminish, or heighten, the significance or happiness of my own. To think of what I might have done, or thought, or understood, had I only been someone else, is to risk plunging into a bottomless melancholy. Or maybe not. After all, I’m happy and content; my life is meaningful and fulfilling in a way it might not otherwise be. I do not, then, want to be someone else. Except when I do.

Our fascination with who we’re not, Miller notes, has “given literature one of its great themes.” Art in its higher forms depends upon the notion of “a self with inner depths, alive at once to its uniqueness and its commonness, inclined to retrospection and comparison, ready to see what’s not, travelling down a narrow, one-way street.” Literary fiction, poetry, and film have been the central means by which, imaginatively speaking, form has been given to unled lives. Through these media, the possibilities and limitations of other’s lives, and by association our own, are explored to dramatic effect. To explore the ways in which writers have called attention to the singularity that delimits and defines all lives, Miller draws upon a wonderful variety of writers and poets, from Henry James to Philip Larkin.

Key points of decision occur early on in life. As Miller remarks, “when we are young, we stand before our options and weigh them. If you’re lucky, these options have come to you full of promise. You imagine what each of them might hold for you – and as you do, the trap springs. You find you have committed yourself to dissatisfaction, for these present, imagined alternatives will become unlived pasts.” Thus, he observes, two of the recurrent character types in literature are the woman wondering who (or whether) to marry, and the man (usually the man) torn between career options. That his wealth and status bestows upon him the privilege of choice, by virtue of being born into a certain class, is both a blessing and a curse. Such characters (for example Hugh Stanbury in He Knew He Was Right or Fred Vincy in Middlemarch) often delay the point of decision, recognising that the retrospective regret that often accompanies the making of choices might stalk him forever. Deciding who to marry is no less fraught: “like a career, marriage is exclusive: in marrying one person, you don’t marry many others.” Looking back, we may wonder if we made the right choice. But who’s to say that one choice would have yielded a better outcome than another – that one vocation, or marriage, would have been better than another? No-one can know in advance whether a decision will be the right one. In one sense, it will have been the right decision if we do not regret it thereafter. But no matter what you decide, there are things you will never experience, or do, or know, or accomplish as a result of your choice. When I choose to do something, I am also choosing not to do something else. Because we must choose one moment at the expense of another, we cannot hope to realise even a fraction of the possibilities open to us.

Literature has developed in parallel with shifting social attitudes and preconceptions, and “it’s the interaction of those shifting conditions and the enduring variations of story form” that grants it an emotional resonance. Miller is attentive, then, to the socio-economic conditions that have broadened our awareness of being particular individuals who live our lives in the presence of others, and who define ourselves against a backdrop of endless alternatives. Modern experience has been driven by market capitalism’s alienation and isolation of individuals, by an economic system that “urges us to calculate opportunities and maximize their effects.” Here, “the elevation of choice as an absolute good, the experience of chance as a strange affront, the increasing number of exciting, stultifying decisions we must make, the review of the past to improve future outcomes: they all feed the people we’re not.” In its amplification of choices, modern life has augmented our sense of possibility, and, therefore, amplified our sense of possibilities withheld or untaken. In this way, our contingent historical conditions have afforded the unled life a degree of fascination it hasn’t previously enjoyed. Hence “the number of people we are not, like the number of people we are, has grown in recent centuries.” 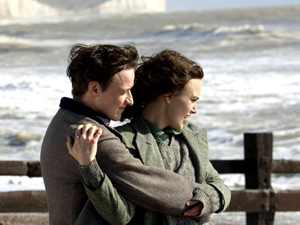 Atonement: Robbie wonders whether in another life he might have been the telepathic leader of a team of mutant superheroes.

In his reading of Ian McEwan’s Atonement (2001), Miller notes that in the early part of the novel, Robbie feels himself to have ‘a hoard of time’; that he is impatient ‘for the story to begin’. Likewise, for Cecilia, the world is at her feet: “every moment seems to press possibilities upon her.” She wonders, before meeting Paul Marshall, “whether it was this particular moment she would remember for the rest of her life – with gratitude, or profound and particular regret.” But the possibilities apparently offered to these characters are ‘abruptly cancelled’, their dreams of a life erased by an event so banal that it seems almost absurd. Yet, as Miller observes, the “consequences are disproportionate to their causes.” All is unexpectedly transformed, lives mutate in unanticipated directions: “singular individuals, decisive events, forking roads: with these in place, the characters live in the aftermath of that June day in 1935, consigned to the unhappy people they are not.” They all wish, in retrospect, “to have someone else’s past, to be someone else.” Worst of all is the realisation that they were not fated to be as they are. That things could have been different – that their lives did not have to turn out this way, only intensifies the sense of regret. If only…

So, thanks to a confluence of social circumstances – for example, the intensification of social comparison afforded by social media – Miller thinks we’re living in a culture where thoughts of unled lives are more frequent. In this, as in much else, I think he’s right. Unled lives are becoming an inescapable feature of our cultural landscape, with its high-speed connections, convoluted patterns of work, and conflicting drives and desires. We’re constantly reminded of who we’re not.

Throughout this quiet, engrossing book, Miller aptly reveals the uncanny mesmerism of the unlived life, of the untaken road – our very modern preoccupation with who we are not. There remains a fundamental sense in which my life is mine to the extent it’s not another’s; that the unled lives that might have been mine make the life I do have seem something both less and more than it is. If I study history, the endless plurality of different lives people have led, now extinguished, pass before me as spectres of what might have been, had I been born at a different time, or existed in a different place. The space-time coordinates that lend my life its singularity – presently, London, July 2020 – are generally shared by others; but it is still only me, sitting here. And I can think back on those contingencies that determined how my life unfolded. Seen in this light, there seems a degree of inevitability about my life. But it wasn’t inevitable. If any one of the contingencies that shaped it hadn’t happened, this could, perhaps, have resulted in someone quite different. The unlikely configuration of events that led me here, as the person I am, seem all the stranger for not having had to happen as they did.

To what extent would things have had to have happened differently for me to be different, or different enough to make a difference? And what difference would this have been? Lacking knowledge sufficient to answer, I circle constantly back to the thought Miller begins with: that I might have been who I’m not. I know this, but I don’t know what it means. My life seems defined as much by what it is not, as by what it is. But the trouble is I don’t know what bearing what it isn’t has upon what it is.

This is a text fresh and alive with the power and mystery of art, steeped in feeling, and, like life itself, resplendent with possibilities as yet unrealised, with knowledge not yet known.

Alexandre Leskanich received his PhD from Royal Holloway, University of London, in 2020. His first book, The Anthropocene and the Sense of History: Reflections from Precarious Life, is under contract with Routledge.

To Be Is To Persist

The Metaphysics of Groundhog Day