Brad Rappaport expresses the essential attributes of the prophet of pantheism.

Sidney Morgenbesser, the ‘apostate’ philosopher of Columbia University, is said to have written on the board as an exam question, “Some say Marx and Freud went too far. How far would you go?” Baruch (Latinised to ‘Benedict’) Spinoza called Jesus the Christ, and even among this company of unbelieving Jews, that’s pretty far. Nevertheless, if Christianity and Islam are Judaic in origin, then Spinoza’s work could be said to be so too, since it originated in, among other things, a preoccupation with the Bible, which he criticized as no one else had before, but never disregarded.

Spinoza and the Rabbis Samuel Hirszenberg 1907

Spinoza’s Theological-Political Treatise (1670) exercised a great influence largely because of its attempt to throw off constraints on freedom of thinking by religious officials – originally the leaders of his synagogue. Spinoza was famously excommunicated from the Amsterdam Jewish community for heresy – for publicising his unorthodox views about the nature of God, at a time when such an act had real consequences. The ban the community placed on him forbade his fellow Jews from speaking with him or even coming within six feet of him. Spinoza spoke of Jesus as Christ and he wrote in Latin for a Gentile audience in part because he had no other viable options.

His family came from converso Jews – Spanish Sephardi Jews who were forced to adopt Christianity upon pain of death by the Inquisition. Some of Spinoza’s forebears had come to the Netherlands to practice freely the Judaism they had never forsaken; but his own inquiry into theology led him into conflict with the guardians of Jewish orthodoxy. He brought into the foreground a question he suggested an intellectual predecessor, Abraham ibn Ezra, had had about the authorship of the Torah (the first five books of the Old Testament, including the Laws of Moses), which Jewish tradition ascribes to Moses, at God’s dictation. Ibn Ezra had kept his doubts quiet, whether out of prudence or out of fear, Spinoza contends. However, Spinoza shrank back from actually condemning the Torah. He shows an appreciation for simple piety, if just barely. He’s more interested in breaking free from the influence of those who abuse faith in the exercise of an intellectual censorship to which they have no rightful claim.

After his father’s death, Spinoza’s sister unjustly sought to claim the inheritance. Spinoza took her to court, won the case, then promptly gave it to her anyway. He lived frugally, declining offers of support from friends, as well as declining offers of university posts, either out of a desire to remain independent, or out of a philosophic spirit, or both. Spinoza’s living came principally from his profession as a lens grinder, which enabled him to work in the field of optics, engaging with other prominent figures who shared his interest [including Christiaan Huygens; see elsewhere in this Issue]. Natural philosophy had yet to evolve into the various disciplines we know as science today, and ‘men of science’ were preoccupied with religion, metaphysics, and experiment alike. Spinoza died at age forty-four, on February 21, 1677, from an illness of the lungs, likely caused or exacerbated by the glass dust he breathed in while practising his profession. 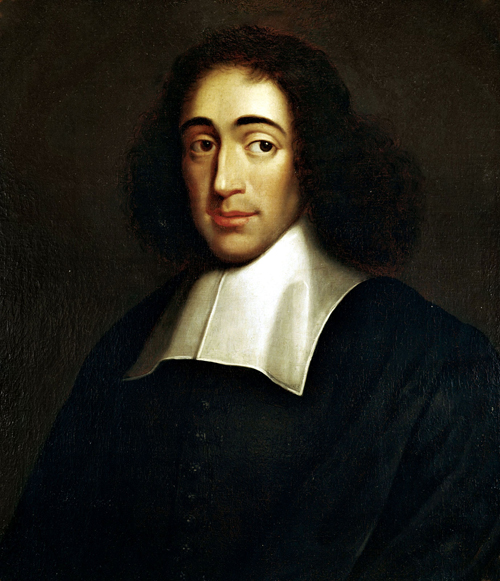 Sigmund Freud would teach that we are initiated by our parents into certain habits and routines, and that we continue on in them, gradually sloughing off what is inessential as we go. For Spinoza in his Treatise on the Improvement of the Intellect (1677), however, this describes the process we go through in coming to learn what there is to be known: sifting through received opinion to see what holds true, discarding what is false, and passing down to the next generation the knowledge remaining. What is of note is that prejudice – prior practice or opinion – is not contrasted by Spinoza to knowledge, but rather, prior practice or opinion is the body of knowledge from out of which truth is refined, in an ongoing process.

Spinoza’s real coup comes not in the form of a critique of orthodox Judaism, but in his construction of an alternative theology in the Ethics (1677). The Ethics is an astonishing book in that it takes the general approach of the ancient Greek mathematician Euclid and applies it to philosophy and theology. Each chapter starts with a few simple definitions and from those derives dozens of propositions and corollaries. The God who emerges in the first chapter is not the stern father rebuking his children so they might be edified, but rather something of a cross between the God of Israel, in His unity, and the Aristotelian god who is the uncaused cause of the universe. This is Spinoza’s famous ‘God, or Nature’ (Deus, sive Natura). He gets this idea from reading the Aristotelian concept of ‘substance’ as one thing, rather than many things. Substance for Spinoza means whatever can exist without relying on anything else to exist. He argues that there can only be one such substance – God – and everything else that exists is dependent on it for its existence. So gone are all the scholastic arguments about ‘Socrates is a substance’ or ‘whiteness is a substance’. Rather, substance expresses itself in different modes, such as the mode of thought or the mode of extension (things extended through physical space). This distinction Spinoza borrowed from Descartes; but by making thought and extension attributes of the one substance, he unites body and mind at a point beyond the possibility of their separation. For if substance is one, then both body and mind (and so we ourselves) are only attributes of it: parts of a whole the totality of which is the individual entity, God, or nature. The idea that there is a Being separate from the beings He creates – the orthodox view of God of the Abrahamic faiths – is folded into that of the philosophical view of God as the cause of itself; self-subsisting nature existing eternally.

In a move Greek rather than Jewish, Spinoza reduces morality to conventions that have arisen from and been tested by our lives in society, calling ‘bad’ the things that we find bad, and ‘good’ the things that we find good. Spinoza never exactly broke with the ancestral morality in which the Commandments had been given; he merely questioned their origin and talked past them. Indeed, Spinoza reduces such morality as derives from the Torah to a minimum in his thinking, but it remains an integral element thereof. However, he characterizes Mosaic revelation as having been given to the people because they could not discern the truth without its prompt, although wise philosophers (himself included) could. This laid the ground for a less tactful turn of his story, in which he identifies Christianity as more naturally coinciding with what lies open to reason than Judaism. So it’s the Gentiles before whom he’s casting his pearls, not the Jews.

The ban placed on Spinoza by Orthodox Judaism still hasn’t been lifted.

Brad Rappaport is a civil servant in New York, which he also makes his home.

Spinoza & the Troubles of the Heart

Was Spinoza Actually An Atheist?

The Strange Story of The Soviet Spinoza