Ștefan Bolea considers the motives of the kind of villain who wants to destroy the world (CONTAINS SPOILERS).

One of Albert Einstein’s mottos was, “If you want to know the future, look at the past.” He was speaking in a pseudo-deterministic vein: seen from a certain perspective, the future is as fixed as the past, since we more or less repeat in the future our actions of the past. But taking an alternative perspective, the past may be just as ‘open’ (rich in potentialities) as the future. Even if only from a metaphorical viewpoint, we may have ‘a future in the past’. Christopher Nolan, the writer and director of Tenet (2020) urges us to ‘stop thinking in linear terms’, and literally go ‘back to the past’ in order to ‘change the future’. 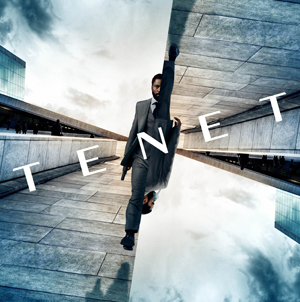 Nolan’s sci-fi action thriller Tenet (2020) stars John David Washington as ‘the Protagonist’, a secret agent who attempts to prevent a nuclear apocalypse by manipulating the flow of time. Robert Pattison plays his partner Neil; Kenneth Branagh is his antagonist, Russian oligarch Andrei Sator; and Elizabeth Debicki is Sator’s wife Kat. From the opening of the movie – a terrorist attack at the Kiev opera house – we catch a glimpse of ‘inverted’ bullets, which move backward in time. The Protagonist’s life is saved by a masked soldier (later revealed to be a future version of himself) who ‘unfires’ such a bullet. A scientist explains to the hero the principles of ‘inverted entropy’, then describes the movie’s central threat: inverted nuclear weapons, manufactured in the future and sent back in time to wipe out the past. Aided by Neil, the Protagonist traces the backwards bullets to an arms dealer, who lets him know that they were inverted by Sator. To get close to the Russian billionaire, he approaches Kat, who is forced to be nearby, having been blackmailed by a forged Goya drawing. This is the main set-up of the movie and I won’t disclose all the plot details. Here I want to focus on Sator, in order to consider the motives of nihilistic film geniuses more generally. For Andrei Sator – Kenneth Branagh at his darkest and very best – wants to become ‘a god of sorts’, by connecting the ‘end of all things’ to his own personal demise. He is dying of pancreatic cancer, and wants to take the world with him to the grave. When he dies, his smart watch will trigger a dead man’s switch on an inverted nuclear bomb which will wipe out mankind (or would have wiped humanity out, to be precise).

Notice first that Sator is experiencing the Freudian ‘end of the world’ phantasm. As the psychopath withdraws his or her libidinal investments from the world, the universe becomes irrelevant to them. They live an apocalyptic experience as a projection of this internal catastrophe. Their magical thinking may be expressed thus: ‘If I cease to love the world, it will surely die’. Sator wants to make this an actual event. He thinks, “May my absolute hatred bury this world!” But there is more to his massively nihilistic ego than mere depression.

The pessimistic Romanian philosopher Emil Cioran (1911-1995) wrote in one of his youthful texts that “the difference between God and me is that God can what I feel.” Sator too aspires to replace thinking with action, such that what he personally feels or thinks will become cosmic reality. He wants to incarnate the divine identity between act and possibility as if he were a god. In this Sator resembles a Roman emperor. He may be compared to Caligula in Albert Camus’ play of that name, who not only wants the impossible, but ‘ dares to follow up his ideas’ to the desired goal, even if that goal involves setting the whole world on fire. One may also mention Suetonius’s description of Caligula revealing his proclivity to universal crime thus: “I wish the Roman people had but a single neck.”

Both Schopenhauer and Cioran were antinatalists – both thought human existence a type of sin. Sator goes beyond this to blasphemy, usurping the power of God (after all, as Freud argues, every son is similar to Oedipus, fantasizing to kill his father). This step he justifies through the logic of nihilism: “My greatest sin was to bring a son into a world I knew was ending. Do you think God will forgive me? He should understand – he killed his own.” Reminding me of Maurice Blanchot’s 2004 book about the Marquis de Sade, Sator wants to become the absolute sovereign, (“A Unique Being, unique among men, this is truly a sign of sovereignty”), or the equivalent of the absolute murderer (“When he kills, the criminal is God on Earth, for he realizes between himself and his victim the relationship of subordination”). Sator’s antihumanism, expressed mainly as hatred and disgust for mankind, climaxes in the project to end this ‘vile race’. It proves that he belongs to the spiritual family of Saint-Fond and Juliette, de Sade’s sovereign-murderers in his novel:

‘’Do you not love men, my prince?” asks Juliette.

“I deplore them. There is not one instant wherein I am not concocting the most violent ways to harm them. In fact, there does not exist a more pathetic race… How base, how vile man is, how disgusting!”

Moreover, Sator may be compared not only to Caligula, but also to Napoleon, as one capable of changing political and societal structures, or in other words, able to definitively change world history.

In his 1874 ‘Schopenhaeurian’ poem Emperor and Proletarian, the Romanian poet Mihai Eminescu (1850-1889) conflates the figures of Napoleon I and Napoleon III into the character of the ‘great king’, a sort of beyond good and evil Übermensch, who with his thoughts and actions directs universal history:

“Along the banks of the Seine, drawn in a gala coach,
The great king slowly goes, pallid and deep in thought.
Neither the lapping waves nor rumbling wheels encroach
Upon his brooding mind; before his train’s approach
There stands the suffering crowd with suffering distraught.”
(‘Emperor & Proletarian’, M. Eminescu)

In the same imperial line of argument, Sator may be likened to the dictator Nicolae Ceaușescu, who had he continued his reign, might possibly have put an end to all Romanians through starvation and deprivation of heat, power and medicine. One of his former advisers reported that the dictator’s wife, Elena Ceaușescu – a sort of Lady Macbeth – while observing the infinite queues for food, which I remember from my childhood, once said: “I wonder what these have rats found? What are they queueing for?” To see the Other as a rat or a roach, as the Ceaușescus and Sator seem to do, and, conversely, to see oneself as a god, is a symptom of an inability to recognize and accept a devastating inner flaw, while projecting one’s infernal shadow onto the Other, thus demonising them. One hates the Other, unable to understand that this disgust is a decoy or a misdirection in a war with oneself.

It is interesting that Sator doesn’t see himself as an absolute murderer, which is what he would be if his plan worked, but instead as a sort of creator : “I’m not [destroying the world]. I’m creating a new one. Somewhere, sometime, a man in a crystalline tower throws a switch and Armageddon is both triggered and avoided. Entropy inverts the same way the magnetic poles have switched 183 times over the millennia. Now time itself switches direction.” I also note that Nolan is not as bold as his film’s antagonist, preferring a conventional happy ending. But it might be argued that in a world where mors omnia vincit – ‘death conquers all’ – positive outcomes are basically lies.

Coming back to Eminescu’s poem, it is intriguing to look at its conclusion. After devising the figure of the emperor, able to change the shape of world history through his actions (or in Sator’s terms, able to recreate, that is, to destroy, the world), the poet realizes that in the presence of death, one’s actions, even changing the course of the world, amount to nothing. Existence, life, may be only a mask for death – as it is in the philosophy of Philipp Mainländer, who saw Schopenhauer’s ‘will to exist’ as a disguised will to death. Inspired by Schopenhauer’s take on Kant’s distinction between nihil privativum (for instance, darkness as absence of light) and nihil negativum (absolute nothingness), where the nihil negativum eventually wins out, Mainländer wrote in 1876 in The Philosophy of Redemption that “life is hell and the sweet still night of absolute death is the annihilation of hell.” Mainländer was exhilarated at the vision of universal death: “Nothing will be anymore, Nothing Nothing Nothing! – O, this gaze into the absolute void!” If life is death’s dream, then even God is only an aspect of Nothingness, and even the question of divinity becomes inconsequential. Therefore, according to Schopenhauer, Mainländer, and Eminescu, even an ‘imperial’ and ‘sovereign’ murder of multitudes – just as much as the most dashing action in the history of the world – is clothed in a veil of illusion, only a shadow of universal death, which in all cases has the last word.

“When you but recollect that death will end this dream,
That nothing much is changed the day your life is passed,
This struggling desire to right the world will seem
Folly, and you’ll grow tired; but one thing true you’ll deem:
That life is but the way to endless death at last.”

Ștefan Bolea earned two PhDs, in Philosophy and in Literature, from the University of Cluj-Napoca, Romania. He is editor-in-chief of the magazine EgoPhobia (www.egophobia.ro), and the editor of Apostrof.

Wagner and Philosophy by Bryan Magee

Philosophers on the Beach

The Denial of the Will-To-Live in Literature and Music

“Wad Some Power The Giftie Gie Us”

Poodle as Representation, Rottweiler as Will