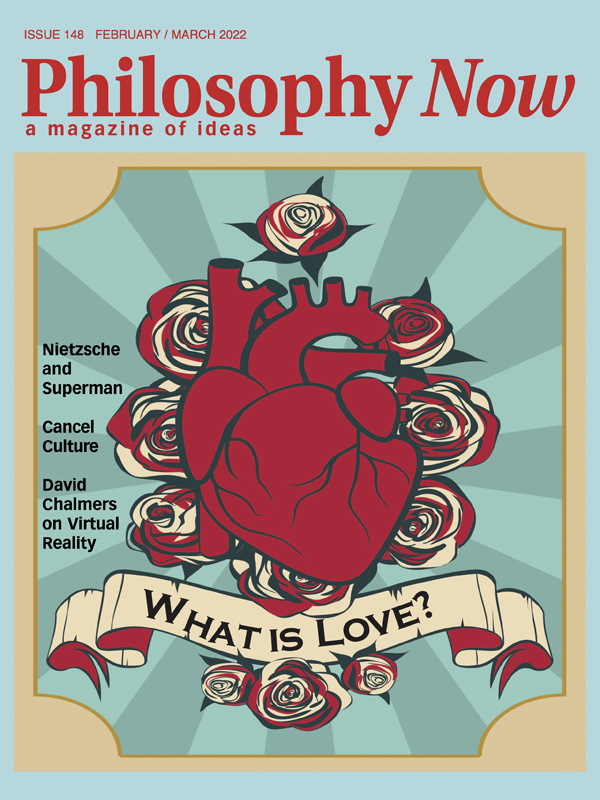 Iris Murdoch & The Mystery of Love

Stephen Leach looks with Murdoch at the three graces of love, art, and morality.

The Philosophy of Romantic Love

Peter Keeble says philosophy, like love, is a many-splendoured thing.

Spinoza & the Troubles of the Heart

Dan Taylor shows that even great philosophers can have their hearts broken.

The Unlovable Parts of a Loving Society

Matei Tanasă asks if we should love the unlovable.

Finn Janning says empathy and compassion are necessary for our thriving and even our survival.

Demons of the Self

Keith Tidman considers the smart bet for our future.

Men of Steel: Superman vs Übermensch

Roy Schwartz examines whether the world’s first superhero really was inspired by Nietzsche’s ‘superior man’, and what the Nazis have to do with it.

Should Kant Be Canceled?

Mark Couch wonders where we should draw the line with historical thinkers.

Erica Stonestreet asks, are we too quick these days to break off relationships?

David Austin on the life in writing of a philosopher of the dispossessed, and cricket.

David Chalmers leaves behind the hard problem of consciousness for an adventure tour of computer-simulated worlds and virtual reality. Paul Doolan interviews him about his new book, Reality+: virtual worlds and the problems of philosophy.

Spinoza a Sephardi, not a Symbol • Adding It All Together, Or Not • Buddhist Reactions • Animals in Original Positions

All Your Love is Need

Smooching by the Seine

Seán Moran reports from the city of love.

Modern Europe and the Enlightenment by Rumy Hasan

Terri Murray asks if liberalism is under attack in Europe.

Kierkegaard and the Question Concerning Technology by Christopher Barnett

Steven Campbell-Harris is provoked by ideas.

The Origins of Totalitarianism by Hannah Arendt

Ștefan Bolea considers the motives of the kind of villain who wants to destroy the world (CONTAINS SPOILERS).