One of the many things I have missed during lockdown has been writing in cafés. There is nothing wrong with my study; indeed, I am very lucky to sit in a tranquil space lined with books that I have read, have half-read, will one day read or re-read, or that I – or my beneficiaries – will in due course take to the charity shop. But even philosophers, whose thoughts are least rooted in their physical surroundings, need a change of scene from time to time. ‘Going out to write’ turns the continuum of the struggle with the blank screen into discrete episodes, and the journey to and from a café provides a scaffolding for the creative process (which is not always as glamorous as it sounds). What’s more, going out of the house to write is a little like heading for the office, and this confers upon thinking about the universe the respectability of serious work.

There are other advantages to writing in a café. When you are thinking about human life, it is both stimulating and chastening to be surrounded by fellow human beings: stimulating because it is a reminder of the complexities of the world you are trying to gather up in a web of sentences; and chastening because it highlights how little the things that preoccupy you as a philosopher are of concern to most of those beyond the horizon of your computer screen.

There are drawbacks, of course. A loud conversation with intermittent detonations of laughter, someone shouting into a mobile phone and giving you access to half of a dialogue that awakens a reluctant curiosity, and unsolicited music, sometimes loud enough to act as insecticide on the buzz of the inner conversation, can all derail trains of thought. There are many ways of dealing with this. Over the years I have progressed from placing Boots best wax in my ears [other earplugs are available, Ed], to using noise-excluding ear-protectors, and eventually, to employing all-singing, all-dancing headphones that can dissipate incoming sound with an acoustic mist. If even this does not work, the insufficiently appreciated magic of technology can wrap around me a screen of Bach, Beethoven, or Brahms that protects my thoughts against the attention-seeking noise. I feel somewhat ashamed of my distractibility, though. Real philosophers do it anywhere, and under any circumstances: Socrates sitting in the snow; Spinoza between coughing fits; and Wittgenstein in no-man’s land on the Eastern Front in the First World War.

I particularly enjoy writing in cafés when I am abroad. My linguistic incompetence makes it possible to observe conversations without their mystery being cancelled out by the banality (or worse) of revealed content. This is one of the reasons why, as Dagobert Runes observed, “People travel to faraway places to watch, in fascination, the kind of people they ignore at home.”

It seems to an islander such as myself that the idea of The Café is most fully realized in continental Europe. In a wonderful essay, George Steiner listed the café, along with walkability, the ubiquitous presence of history, and the twin heritage of Jerusalem and Athens, as being central to ‘the idea of Europe’. There seems be no better way of being in, or arriving in, Paris, Vienna, or Prague, than settling down in a café with a coffee and a newspaper, a book, or a notebook. It is easy to sympathise with the shock Simone de Beauvoir recorded in a letter to Jean-Paul Sartre when she first visited the United States: “It is not customary here to do work where people drink… As soon as my glass is empty, the waiter comes over to inquire; if I don’t empty it fast enough, he prowls around me” (Quoted in Carole Seymour-Smith, A Dangerous Liaison). 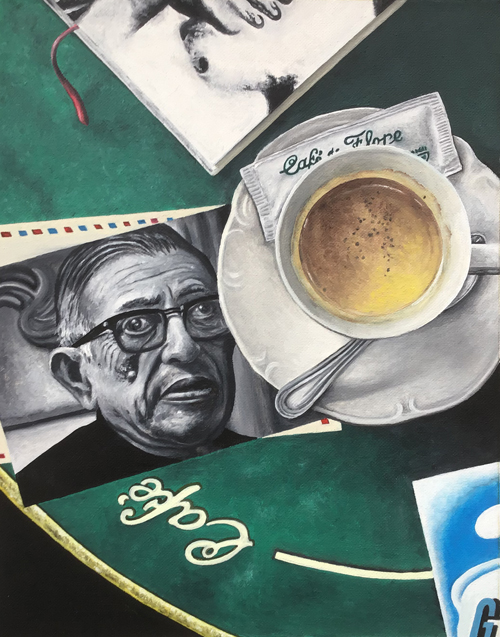 ‘Where is that waiter with my coffee? He’s such a bad waiter.’
Sartre painting © Ron Schepper 2021

It is impossible to think of de Beauvoir, Sartre, and cafés without immediately referencing waiters – in particular the waiter singled out by Sartre in Being and Nothingness for rather unkind attention.

Scholars of Philosophy Now will recall that Sartre’s waiter has already figured in this journal. In 2007, Carl Murray (‘Sartre and the Waiter’) wittily turned the tables and had the waiter speculate about Sartre; and in Frank O’Carroll’s ‘Sartre & the Waiter’ (2013), the former tried to persuade the latter to give up his job at Les Deux Magots (one of Sartre and de Beauvoir’s favourite haunts) in favour of something more ambitious.

Behind both these pieces is something I share wholeheartedly with their authors: a deep uneasiness with Sartre’s attitude to those who wait on him, rushing round while he sits at rest passing judgement on the world. But before we pass judgement on the philosopher, let us look a little closer at the case for convicting the waiter of what Sartre calls ‘Bad Faith’. At one level, Bad Faith is a matter of insincerity:

“His movement is quick and forward, a little too precise, a little too rapid. He comes toward the patrons with a step a little too quick. He bends a little too eagerly; his eyes express an interest a little too solicitous.”
(Being and Nothingness, p.59, 1943, trans. Hazel Barnes.)

Sartre is condemning the waiter’s waitery behaviour as ‘inauthentic’: he seems to be playing a game, and the game is that of being a waiter in a café. Sartre then generalizes this criticism beyond the rather obsequious, possibly mickey-taking, character he is observing with his unforgiving gaze to anyone committed to their job. The charge of inauthenticity is levelled at all ‘tradesmen’ – butchers, bakers, candlestick makers – and, indeed, of professionals of all sorts. So giving one’s self up to an occupation is inseparable from inauthenticity.

However, given that the waiter is paid for being a waiter, his acting the role of a waiter would hardly seem to be grounds for criticism. A café where all the staff rejected this role would not be the kind of place where a philosopher, or anyone else, would voluntarily pass an hour or two. Nor would one wish to be operated on by a surgeon, or flown by a pilot, or placed in the hands of a mountain guide who did not subordinate themselves and their agency to their role, even though the essential features of the role are prescribed by others, as set out in explicit contracts and implicit expectations.

What, then, is Sartre’s grouse with the waiter? Why is professionalism ‘Bad Faith’?

Admittedly, there are bound to be times when being good at one’s job involves some pretence. The waiter who says it is nice to see us may not really feel it is: he had neither looked forward to the encounter, nor felt regret at our recently patronizing rival establishments. The sympathetic attitude of a worn-out doctor seeing the fortieth patient of the day may also be simulated. But these are hardly things of which anyone but Sartre would disapprove.

There is something deeper in Sartre’s charge of bad faith, though, and it goes all the way to the heart of his philosophy. If someone wants to be a ‘real waiter’, he claims, he aims at what is imaginary: “I am a waiter in the mode of being what I am not” (p.60). That is to say, in assuming a role, I am trying to be a thing, and a self cannot be a thing in the way that an inkwell is a thing.

But this is entirely beside the point. Our aspiration to be a waiter or a grocer or a pilot or a neurosurgeon is not an aspiration to eliminate the distance between one’s self and the role. That distance will always remain. We cannot be that role in the way that a tree is a tree because the tree does not enact its being a tree.

This is obvious from the way we don and doff roles. The waiter assumes ‘waiterhood’ when he enters the café and leaves it behind when he leaves the establishment at the end of the day. Then he is free to assume other roles – as father, son, besotted lover, friend, member of a football team, fanatical stamp collector, conspirator, flaneur … the list is endless. Even within his working hours, he will open up a variety of distances from his role of waiter: he will have other preoccupations, good or bad relationships with his colleagues, and his own views about his customers.

If rejection of a sustained commitment to a role were a condition of authenticity, then a world populated by authentic people would be Hell. As DZ Phillips pointed out in ‘Bad Faith and Sartre’s Waiter’ (Philosophy, 1981), Sartre’s metaphysics entails that sustained absorption in anything would constitute Bad Faith. Yet as Phillips says, if we were not taken up by enduring interests and concerns, “we would not be moved to choose anything. The metaphysical choice would belong to an equally metaphysical self, an extensionless point devoid of substance.” We could not take on any role or serve any useful function in a reliable way without abandoning or being untrue to what Sartre takes to count as our self.

To appreciate the extent to which Sartre himself did not really believe the view he developed in Being and Nothingness that to embrace something – a role, a sustained project, a long-term commitment – is to succumb to inauthenticity, we have only to recall his own massive projects. Foremost among them were the big books he wrote, concluding with the rambling, confused 2,500 page study of the French novelist Gustave Flaubert that occupied him for twenty years. The intrinsic dynamism of the self (which for Sartre apparently means that the self is ‘identical with what it is not and is not what it is’) is not betrayed by a constancy expressed in a duty executed faithfully over many years. Rather, one has to accept that the coherence of an ethical life is necessarily supported by a scaffolding of automaticity, and by a resistance to the psychopathic impulse to reject the accidents that have led one to take a particular path in life.

It’s time to leave and thank the waiter for his attentiveness, warmth, and courtesy. And yes, for providing me not only with excellent coffee and an ambience to go with it, but also with a theme for my column. On the way out I notice a pipe-smoking, bespectacled regular who rarely exchanges a civil word with the staff. In solidarity with the waiter, I quote the last paragraph of Phillips’ paper: “There is in fact one ultimate right to which the establishments to which waiters belong reserve for themselves, namely, the right to refuse to serve a customer. If I am not mistaken about Sartre and those who think like him, I think they ought to be high on the list of those whom waiters refuse to serve.” The waiter smiles – but discreetly.

Identity and Freedom in Being and Nothingness