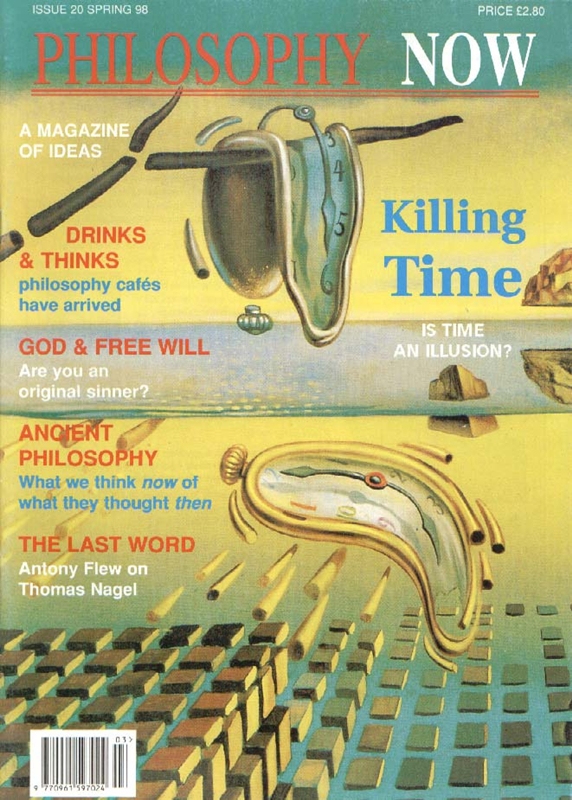 Be Your Own Person – Be a Philosopher

A roundup of news from the philosophy cafés.

Ralph Blumenau argues that there is more to the doctrine of predestination than we might think. To support his theory he looks back to the teaching of Original Sinner St. Augustine.

Cliff Stagoll on the strange case of John McTaggart, who didn’t believe in time.

Russian philosophy was brought to the public eye by the recently deceased Sir Isaiah Berlin. In this article, David Limond explains the thinking of a philosopher who married political thinking and Christianity in a particularly Russian way.

Emrys Westacott comes to the aid of a much reviled theory.

Is suicide a disease to be treated, or a choice to be respected? Justin Busch tackles the problem by analysing the concept of disease.

In the first of our ‘Overview’ series, Mark Daniels describes the latest work on the earliest philosophers.

Rantings and Ravens • Arguing with himself? • How Soon Is Now? • Mothers and Gods • Humpty Dumpty Theology • Valid and True • Long-Winded Proofs • To Know All Isn’t To Forgive All… • Challenge Everything!

Danny Kodicek explains why Douglas Hofstadter thinks analogies are important. Loop is to pool as rich is to…

Solidarity in the Conversation of Humankind: The Ungroundable Liberalism of Richard Rorty by Norman Geras

The Last Word by Thomas Nagel

Antony Flew cheers an attack on relativism by Thomas Nagel.

Why should I live when others die?

A short story in which Arthur Chappell sees his life flash before his eyes.