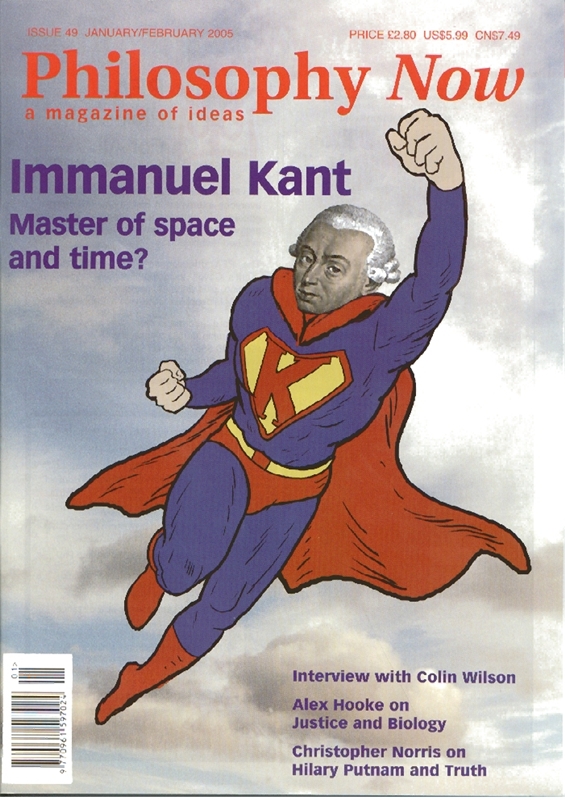 Anja Steinbauer introduces the life and ideas of Immanuel Kant, the merry sage of Königsberg, who died 200 years ago.

Pinhas Ben-Zvi thinks Kant was inconsistent in his revolutionary ideas about the nature of space and time.

Kant versus Hume on the Necessary Connection

Stuart Greenstreet finds that free will and determinism really do go together.

“Memorable Philosophy Professors I have Known”

From time to time we’ll be publishing reminiscences about philosophers, selected and compiled by Dana Cook.

Can TV Drag Us Out of Our Cave of Ignorance?

Greg Kitsock takes a look at the philosophical television show No Dogs or Philosophers Allowed and its founder Ken Knisely.

Putnam is one of today’s leading living philosophers. He has changed his ideas repeatedly on some central philosophical problems including the nature of truth. Christopher Norris tells the story so far.

Is there a link between biology and ethical behaviour? Alexander E. Hooke takes a look at phrenology and other theories from down the ages. This article is dedicated to Bill Connolly.

Philosophy, Life and Philosophies of Life

Trudy Govier wonders whether the lives of Jean-Jacques Rousseau and Mary Wollstonecraft tell us anything useful about their ideas.

Colin Wilson is an author, existentialist philosopher and scholar of the occult. He has been writing fact and fiction for nearly fifty years. On the launch of his autobiography, Alan Morrison thought this might be an apt time to speak to the man himself.

Kant, Herder and the Birth of Anthropology by John Zammito

The loser wins, comments Ivan Brady as he ponders John Zammito’s book on the rivalry between Kant and Herder.

The President of Good and Evil by Peter Singer

Thomas Wartenberg thinks darkly fraternal thoughts while watching a movie by Pedro Almodovar about sibling rivalry and the appalling results of Bad Education.

Warren Allen Smith took at trip to Times Square to see a musical whodunnit about philosophical acrobats debating the existence of God. What else could it be but Jumpers by the profound and playful Tom Stoppard.

What happened when the game’s authorities got serious about cleaning up hockey? Ryan Baker on philosophy in action.