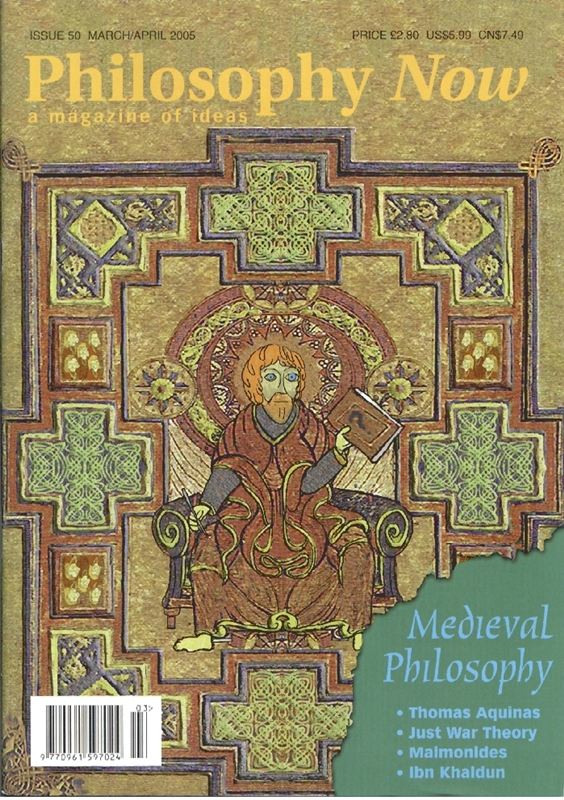 The Cathartic Potion of Living Together

Panayiota Vassilopoulou and Jonardon Ganeri report on a convivium in Delhi.

An Introduction to Medieval Philosophy

Finding a Philosophy in Leonardo

Chad Trainer on Leonardo da Vinci as a philosopher.

Ibn Khaldun and the Philosophy of History

Imadaldin Al-Jubouri on the medieval Islamic philosopher who pioneered the scientific understanding of history.

In which Mark Goldblatt starts off by discussing Thomas Aquinas and ends up by killing theology.

What would the medieval philosophers who developed the theory of a Just War have thought about the invasion of Iraq? Ian Dungate imagines their response.

Stephen Stewart on a forgotten golden age of philosophy.

The Perplexing Nature of the Guide for the Perplexed

Mark Daniels introduces the most famous work of Moses Maimonides and asks – was he a philosopher, a heretic or a mystic?

Ships on a Collision Course

Patricia Railing on the point of abstract art, and on how it works.

Deiradiotes strikes again with the fourth of his philosophical crosswords. Have a go, if you think you’re hard enough.

Our science columnist Massimo Pigliucci on a longstanding problem in biology and how philosophy helps.

The Return of the Design Argument

Thomas Wartenberg ponders the classic dilemma of the Good Mother in a film about ethnicity, renunciation and cookery: Spanglish.

A Bale of Woe

The name of the medieval logician Jean Buridan (c.1295-1358) is forever linked to a curious problem in decision-making. Peter Cave recounts his own sad but instructive meeting with Buridan’s Ass.