“Millions of flowers on the earth tell us his love. Blue waves of the ocean sing of his work. He is the creator of happiness.”

When teaching philosophy I often ask students to identify where they might expect to find the words written above. Usually they reply that these verses are part of some hymn in praise of God. The students are therefore surprised when I reveal the last line:

These verses are part of a patriotic song of North Korea, a country in which religious practice is severely curtailed. There are only four church buildings in the capital, Pyongyang, and no resident priest can be appointed to Changchung ‘Cathedral’, although it’s officially Catholic. Yet as the song shows, this country in which religion has been practically eliminated from public life does not lack the practice of worship. On the contrary, General Kim Jong-Il has appropriated at least three of the traditional divine attributes, making himself as omnipotent and omniscient as contemporary technology can achieve, as well as being the object of a personality cult. His people may well be thankful that he has not yet managed to make himself immortal as well.

This transference of divine attributes to supreme leaders was a widespread but presumably unexpected development in those regimes of the twentieth century that acted systematically against belief in a transcendent Creator. For this reason among others, the history of this period warrants careful study by those who take an interest in the rise of the so-called ‘New Atheists’ today. Yet the existence of the contemporary North Korean state, together with its less extreme counterparts elsewhere, highlights a more basic point about the New Atheists that has attracted surprisingly little attention – that a confident, proselytising atheism, actively campaigning against religion in the public arena, can scarcely be described as ‘new’. On the contrary, there are at least five countries at the present time (China, Vietnam, Laos, Cuba and North Korea), governing well over one fifth of the world’s population, in which the apparatus of the state is committed to promoting atheism and discouraging or actively persecuting the practice of religion. While the number of such states has diminished since the middle of the twentieth century, and no state today goes quite as far as Albania under Enver Hoxha (which officially banned the practice of every religion), there are still a good many ‘Old Atheists’ around. Indeed, ‘Old Atheism’ has had an impact on public life since at least 1793, when radicals enthroned the ‘Goddess of Reason’ in Notre Dame, the great cathedral of Paris, and celebrated the establishment of the Cult of Reason, ironically during the period of the Reign of Terror. 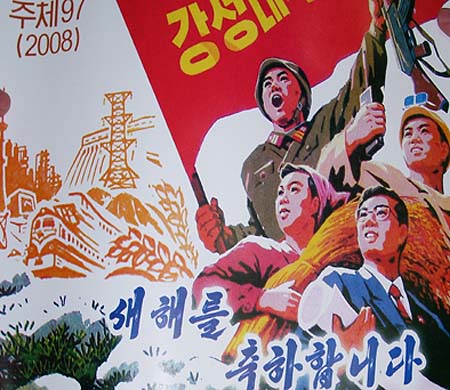 The Atheist Bus Campaign was not the first advertising to suggest that atheism can bring peace and joy. A contemporary propaganda poster from North Korea, where the practice of religion is almost entirely banned.

While the New Atheists are writers rather than the leaders of political movements or countries, they have adopted at least some of the same techniques as their predecessors. One of the most consistent themes of the work of Richard Dawkins, for example, is that atheism is the true friend and natural ally of science and reason in a war against religion and irrationality. This method of attacking religion is also nothing new. In the Soviet Union, for example, after the initial decades of crude and extremely brutal persecution of religious believers, the Central Committee of the Communist Party of the Soviet Union (CPSU) decreed that philosophers and other intellectuals should become more active campaigners in the war of ideas against religion. Adopting similar approaches to those found in Dawkins’ books today, the CPSU wanted to utilize ideas associated with science – rational accounts of the structure of the universe, the origin of life and so on – with the explicit aim of eliminating all religions, sects and religious remnants. As a result of this decree, the All-Union Society for the Propagation of Political and Scientific Knowledge started a monthly magazine, Science and Religion. The themes were also taken up by lead articles of Voprosy filosofii (Problems of Philosophy). The chapter headings of one of the most significant works of this period, The History and Theory of Atheism, convey the general ideas: Atheism as the Essential Component of the Scientific, Materialist Weltanschauung… The Opposition Between Science and Religion… On the History of the Fight Between Science and Religion… The Irreconcilability of Science and Religion in Conceiving Social Life, and so on. (For a nuanced and scholarly account of the complex relationship of science and religion, I recommend John Hedley Brooke, Science and Religion: Some Historical Perspectives, 1991.)

This portrayal of atheism as the true friend and natural ally of science and reason against religion did however lead to some unexpected consequences for science in the Soviet Union. Since the CPSU was so keen to identify its type of atheism as the essential component of the ‘scientific, materialist weltanschauung’, problems tended to arise when scientific theories seemed to be in disagreement with the ideological positions of the party. One common consequence, at least during the Stalinist period, was simply to deny that the problematic sciences were true sciences. The most notorious episode was the banning for nearly two decades of the study and research of Mendelian Genetics (incidentally, founded by a Catholic monk). During this period, hundreds of scientists were imprisoned or killed, the most prominent being Nikolai Vavilov, who was starved to death in the Gulag in 1943. (A striking contrast with Galileo, who died in his bed.) Furthermore, as late as 1948, Soviet astronomers resolved to oppose the ‘reactionary-idealistic’ theory that is today called the Big Bang – first proposed by another Catholic priest, Fr Georges Lemaître. This theory of a finite widening of the universe would help ‘clericalism’, they warned.

Despite the consistency of some of their aims and propaganda methods, New Atheists and Old Atheists nevertheless differ in some important ways. None of the New Atheists is the object of a personality cult in the manner of a supreme leader in a typical atheist state of the last century. Furthermore, we may hope that the New Atheists will be more supportive of the ideal of a democratic, free and open society than their predecessors. Yet even on the latter issue, there are some unsettling hints that the New Atheists have a hankering for some of the methods of the Old Atheists. As Daniel Dennett wrote in a blog in the Washington Post just a few weeks ago, “If quacks and bunko artists can be convicted of fraud for selling worthless cures, why not clergy for making their living off unsupported claims of miracle cures and the efficacy of prayer?” Elaborating further, Dennett says that, “I also look forward to the day when pastors who abuse the authority of their pulpits by misinforming their congregations about science, about public health, about global warming, about evolution must answer to the charge of dishonesty.” Dennett thus looks forward to the day in which members of the clergy can be brought to court for teaching, for example, that prayer is efficacious, or for ‘misinforming’ their congregations about global warming. Since religions that uphold belief in a personal God generally teach that prayer is efficacious, and since many people, including some prominent scientists, express a diversity of views regarding global warming, it seems that a great many people would potentially be at risk of prosecution in the kind of state that Dennett looks forward to, simply for expressing these views in a public forum.

To evaluate the New Atheists, it is prudent to study the history of the Old Atheists as well. Confident, proselytising atheism, actively campaigning against religion in the public arena, is nothing new in the world. Indeed, entire countries have been governed by such ideologies for periods of several decades. Studying what went wrong in these Old Atheist states may at least cause us to question the New Atheists about how they propose to avoid similar tragedies in future.

Fr. Andrew Pinsent was formerly a particle physicist who worked on the DELPHI project at CERN. He also has a degree in theology, doctorates in physics and philosophy and is now Research Director of the Ian Ramsey Centre for Science and Religion at Oxford University.

Predestination and the Wagers of Sin

An Introduction to Classic American Pragmatism