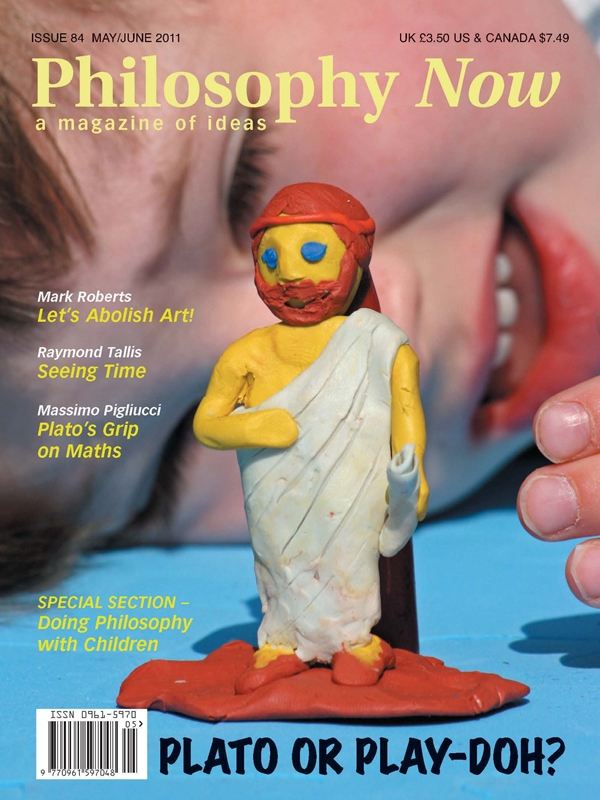 Robert Fisher finds wisdom in the mouths of infants.

How Children Made Me A Better Philosopher

Rory Kraft, Jr. tells us how philosophical thinking can be youthfully enhanced.

Thomas Wartenberg explains his method of introducing philosophy to children.

The Challenge of Moral Education

Wendy Turgeon on ways of getting children to think about values.

What Would Socrates Say To Mrs Smith?

Susan Gardner gets some childcare tips from the wisest man in ancient Athens.

How Believing in an Afterlife Can Ruin Your Life

Mark Roberts gives an answer to the question of ‘Art’.

Neil Greenspan takes an appalled glance at all the BS in academia and beyond.

The Facts of Life

Tim Wilkinson uses evolution to sort out his facts from his ‘mere theories’.

Ellen Grabiner ponders the bearable lightness of being a Pinhead.

Who Or What Am I?

The following answers to the question of the self each win a random book.

Our thirty-eighth box of beguilling brilliance bounded and balanced by Deiradiotes.

Peter Worley runs The Philosophy Shop in London with his wife Emma. Rick Lewis asks him about teaching philosophy to kids.

What Is Life, Anyway? • Coerced Into Liberty • Strung Out Physicists • Divine Hope Dries Up • States Of Souls • Morality Lives On, And On • Poetic Morality

Our philosophical science correspondent Massimo Pigliucci takes a dose of it.

A Philosophy of Fear by Lars Svendsen

More Than Matter? by Keith Ward

Mark Vernon asks what the matter is with Keith Ward.

The Shorter Routledge Encyclopedia of Philosophy

Babak Amou’oghli relates a tale of hospitality and hostility.

Sam Morris considers the odds of an odd meeting.