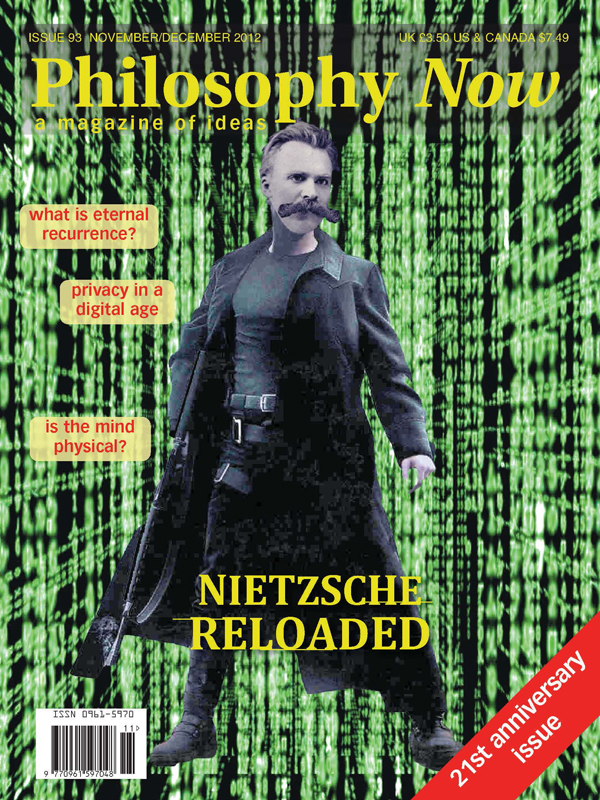 Nietzsche’s Übermensch: A Hero of Our Time?

In 1885 Nietzsche finished writing Thus Spoke Zarathustra, in which he has the prophet proclaim many Nietzschean ideas in parables and epiphets. Constantine Sandis asks why Nietzsche particularly chose Zarathustra.

The Challenge of Eternal Recurrence

The Incoherence of Moral Bioenhancement

Terri Murray responds to an article in Issue 91 that argued that our moral dispositions should be improved by the use of drugs.

Phil Badger explores controversial issues at the heart of liberalism.

Free Will versus Natural Necessity?

Stuart Greenstreet asks if they can be reconciled.

On ‘Known-To-Be-False’ Materialist Philosophies of Mind

Graham Smetham argues that since quantum mechanics tells us that matter is dependent on the observer, the mind can’t be reduced to the brain.

David Pitts on Epimenides of Crete and his infamous Liar Paradox.

Alistair MacFarlane considers the life and work of a profound physicist.

Raymond Tallis takes on the strange case of Damien H.

The Science Delusion by Rupert Sheldrake

Science in the Twentieth Century and Beyond by Jon Agar

Michael Faust reviews this film in the light of eternity.