Alistair MacFarlane considers the life and work of a profound physicist.

In 1905 our view of the world was changed dramatically and forever. Before then, all physicists thought that light was a wave-motion of some medium, which they called the ether. And they thought that if the velocity of light were to be measured independently by observers in differing relative motions, then different velocities would be observed. Some leading scientists were even unconvinced of the reality of atoms and molecules. Then, over the course of that single year, a lowly technical officer (third class) in the patent office in Bern, Switzerland, submitted a series of papers to the Annalen der Physik (Journal of Physics) which altered everything. One of the papers provided the first demonstration of the reality of molecules. Another contained the hypothesis that light could be considered as a stream of elementary particles (now called photons). And another gave the theory of Special Relativity, which contained the amazing assertions that the speed of light was the same when measured by all observers independent of their motion, and that matter could be transformed into energy. It took a few years for the worldwide scientific community to absorb the implications of this stupendous and unprecedented bout of scientific creativity, by which time Albert Einstein was no longer a lowly patent officer but the world’s most famous scientist. 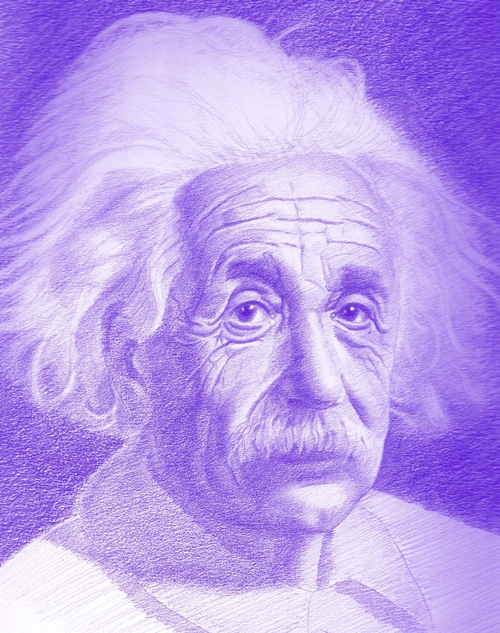 Albert Einstein was born on 14 March 1879 in Ulm, Würtemberg, in southern Germany, and he retained a Schwabian accent when speaking German. His father Hermann was an electrical equipment salesman, and the family was never prosperous. From his mother Pauline (née Koch) he inherited a lifelong love of music. In 1880 the family moved to Munich, where his sister Maria (Maja) was born the following year. They remained close throughout her life.

During childhood Einstein had two magical experiences that induced a sense of wonder which never left him. Between the ages of four and five his father gave him a compass. The stubbornly independent behaviour of its needle fascinated him, and he realised that it must be controlled by some invisible force. Later, at around the age of twelve, Albert was given a small book on elementary geometry and, like Thomas Hobbes and Bertrand Russell, was struck by the power, elegance and lucidity of geometrical arguments. Unlike Russell, the fact that the proofs depended on a set of axioms did not trouble him, for he had glimpsed the possibility of getting certain knowledge of the objects of experience by the power of pure thinking.

Einstein never liked school – few people have been more independently-minded – but he was good at what interested him. In September 1896 he passed his final school examination, and in October enrolled in the Eidgenössische Technische Hochschule (ETH), the Swiss Federal Institute of Technology, to train as a high school teacher in physics and mathematics. He was the youngest in an intake which included Mileva Maric from Titel in Serbia, then in the Austro-Hungarian Empire. They were soon living together, to the despair of his mother. Mileva became pregnant, and moved back to Serbia to live with her parents until the birth of a daughter Liserl in early 1902. All efforts by biographers to find out what happened to this little girl afterwards have failed.

Einstein’s father died in 1902, after asking the family to leave him to die alone, which greatly upset Albert. Albert was then appointed to a post in the patent office in Bern, moving to live there and marrying Mileva in a civil ceremony in 1903. Their first son, Hans Albert, was born in 1904, and a second son Edward in 1910. He divorced Mileva in 1919, and shortly afterwards married his divorced cousin Elsa Einstein Löwenthal, adopting her two daughters Ilse and Margot. Elsa died in 1936, and his sister Maja came to live with him in 1939, remaining with him till her death in 1951.

Einstein’s theoretical power stemmed from his deep, intuitive grasp of the workings of physical reality combined with an ability to look at things unencumbered by conventional assumptions. In Special Relativity he considered the experiences of observers who move in straight lines with constant velocity relative to each other (hence the name ‘relativity’). In the later theory of General Relativity, the observers can pursue curved paths with non-constant velocities (eg, while accelerating). In fact, the special theory is a special case of the more general theory of relativity (hence the names ‘special’ and ‘general’).

The special theory is based on two postulates: all the laws of physics are the same for all observers, and all see light as having the same velocity, whether the light has been emitted from a stationary body, or from one moving with a constant relative velocity. Previous to this theory, the conservation of mass and the conservation of energy had been regarded as separate laws, but now mass was shown to be a form of energy. Special Relativity also showed what modifications to physical theory were required to deal with objects moving at speeds near that of light, while the general theory showed what changes to physics were needed in the vicinity of massive objects such as stars or planets. Hermann Minkowski re-formulated Special Relativity in terms of a four-dimensional time-space Euclidean continuum, or ‘flat’ space. Einstein, who never used more mathematics than he had to (although he was capable of mastering any he needed), joked that after Minkowski’s re-jig he could hardly understand it himself.

After an intense and prolonged intellectual struggle, Einstein realised that the transition from Special to General Relativity required renouncing the flatness constraint on space. Rather, space must be curved, and the amount of the curvature was shown to depend on the amount of matter in that space. Space is shaped by matter, and a new, geometrical theory of gravitation was born. All the required mathematical apparatus was already available in the form of Riemannian geometry, developed in the nineteenth century by Bernhard Riemann.

Einstein’s new gravitational general theory reproduced all the results of Newton’s gravitational theory, which is still a good model when gravitational attraction is comparatively weak. But crucially, General Relativity also made two experimentally-verifiable new predictions. It explained for the first time an anomaly in the motion of the planet Mercury (caused by relativistic gravitational effects from the Sun), and it predicted the amount by which light would be deflected when passing near a star such as the Sun. The verification of the stellar bending of light by an expedition led by Sir Arthur Eddington to observe the solar eclipse of May 29, 1919, was announced in the London Times of 7th November 1919 under the headline: “REVOLUTION IN SCIENCE, NEW THEORY OF THE UNIVERSE” – and Einstein became, and remains, the most famous of all scientists.

Einstein’s rapid academic progress proceeded against the background of the equally rapid advance of Naziism, of which he was an outspoken critic. After a meteoric rise through various university appointments, he reached the pinnacle of German science as a Professor in the University of Berlin. But by 1935 his life was in danger, and he fled to the United States via Albania. Einstein became the first professor in a new Institute for Advanced Studies (IAS) at Princeton, New Jersey, where he remained until his death. On April 17, 1955, he had an abdominal aortic aneurism, which caused severe internal bleeding. He died the following morning, having refused surgery. His remains were cremated and his ashes scattered in the grounds of the IAS. However, the brain was removed in an autopsy in the grotesque belief that its detailed examination might explain his immense intellectual powers.

In the late 1920s and early1930s Einstein and his friend the quantum physicist Neils Bohr had a famous series of discussions on what Bohr called ‘epistemological problems in quantum theory’. Einstein repeatedly devised imaginary experiments whose outcome might contradict the orthodox (‘Copenhagen’) interpretation of quantum theory, which non-realist interpretation he could not accept. The thought experiments pitted his view of an objectively existent quantum reality against Bohr’s acceptance of the instrumental (predictive-of-results rather than descriptive-of-reality) approach to quantum theory. Bohr always won these arguments, but the ingenuity shown on both sides is fascinating, and while Einstein accepted the overwhelming predictive success of quantum theory, he never abandoned hope for a realist approach.

Einstein made his last great contribution to science in 1925 when, with the Indian physicist Satyendra Nath Bose, he worked on the statistical theory of ideal monatomic gases (Bose-Einstein statistics). He was awarded the Nobel Prize in physics for his work on the photoelectric effect in 1921 (his work on relativity being regarded as still controversial at that time). Einstein spent the remaining thirty years of his life trying to create a Unified Field Theory that would combine General Relativity with quantum theory – a goal which remains unfulfilled. He wrote to President Roosevelt before the outbreak of the Second World War warning him of the danger of Nazi Germany acquiring an atomic bomb – precipitating the development of such a weapon in America.

Einstein transformed cosmology, opening up new vistas of the universe, large and small. In 1999, Time magazine made him its man of the century, and he has both an asteroid and a chemical element (number 99, einsteinium) named after him. He was a lifelong opponent of totalitarianism, and a tireless supporter of humanitarian causes. He combined immense powers of scientific insight with an almost childlike sense of wonder. Few people have been so unpretentious, and even fewer as influential. We may never see his like again.

Of Adolescents and The Aristotle

What Is The Present Nature, And The Future, Of Philosophy?

The Philosopher as Detective

The Shorter Routledge Encyclopedia of Philosophy