Friedrich Nietzsche, who was born in 1844, fell silent in 1889, and died eleven years later, was the first great philosopher of the twentieth century. What made, and makes, him so important, is that he recognized with great clarity and impressive foresight the most troubling and persistent problem of modernity, the problem of values. His attempts to resolve this problem were not successful, but they did uncover depths of issues that still defeat our best efforts today. 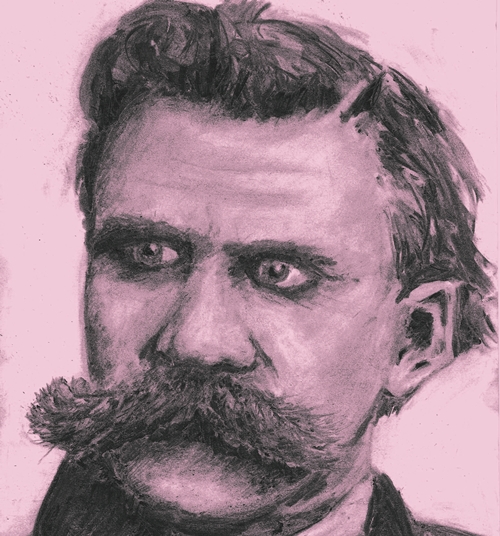 Let’s begin with his notorious declaration that “God is dead” (first in The Gay Science, 1872). Secular thinking is a commonplace today, but in Nietzsche’s time this declaration was strikingly prophetic. The point of the claim is not so much to assert atheism: although Nietzsche was certainly an atheist, he was far from being a pioneer of European atheism. Rather, his observation is sociological, in a way: he means that Western culture no longer places God at the center of things. In another way, the term ‘sociological’ is quite misleading, for there is nothing ‘value-neutral’ in Nietzsche’s assertion. The death of God has knocked the pins out from under Western value systems, and revealed an abyss below. The values we still continue to live by have lost their meaning, and we are cast adrift, whether we realize it or not. The question is, what do we do now?

One might at first think that ‘the death of God’ is an all-too-familiar issue, conservative Christians arguing that if God does not exist then objective moral values don’t exist either, and secular humanists replying indignantly that God’s existence is entirely irrelevant to the validity of the moral judgments we make. Nietzsche agrees with those theists that the death of God signaled the end of objectivity as a feature of moral value, but differs from them by not taking this as a reason to believe in God. Yet he did not think that values were subjective in the crude popular sense, that anyone’s convictions are as valid as anyone else’s. Rather, to Nietzsche, values have power, and spring from power: like works of art, their greatness is in their power to move us. But the media manipulation of popular sentiment is no indicator of the power that creates value, since almost everybody is merely a member of the herd to Nietzsche. Any relating of value to popular preferences (even the preferences of an aristocracy) is an attempt to hold on to the objectivity of values. But if moral objectivity is at an end, an entirely new and radically individualistic source of value must be sought. Nietzsche’s conception of the power of values is deeply elitist: only the great can create values.

Nietzsche argued that in ancient times, values belonged to peoples who created them:

“A tablet of the good hangs over every people. Behold, it is the tablet of their overcomings; behold, it is the voice of their will to power… ‘You shall always be the first and excel all others: your jealous soul shall love no one, unless it be the friend’ – that made the soul of the Greek quiver: thus he walked the path of his greatness… ‘To practice loyalty and, for the sake of loyalty, to risk honor and blood even for evil and dangerous things’ – with this teaching another people conquered themselves, and through this self-conquest they became pregnant and heavy with great hopes…”
Thus Spake Zarathustra, I, 1883

Thus in antiquity it was the power through which a people defined itself that created the values of that people. Then came what Nietzsche thinks of as the degenerate complexity of Christianity, in which weakness rather than power was used to define value: “The meek shall inherit the earth.” (Matthew 5:5) In fact, the Christian priestly class does exercise its own will to power, in its triumph over pagan peoples, but in the process man’s instinctual animal pride has been abased through the disciplines of poverty, mortification of the flesh, guilt for sin; a morality echoing the message of a God who suffers on the cross. The explicit message is that value is not embodied in earthly holy men, but beyond, yet the truth is the opposite: the priests’ power has been realized in their victory over competing allegiances. But this victory has been won through Christianity’s plague of self-denial – what Nietzsche calls a “nay-saying” to life.

But with the death of God, Christianity’s mode of anti-strength value-creation has collapsed, and modern man has no firm unitary belief to replace it. Our ‘value’ is an incoherent pastiche of bits and pieces from a hundred sources. Nietzsche called it “the multi-colored cow.” The smorgasbord of faiths on offer in the West today wonderfully illustrates what Nietzsche foresaw: values as mix-and-match consumer goods. This is absurd, and the results are pitifully anemic; but how and where can the human will to power burst forth with a new set of values? That was Nietzsche’s dilemma, and it has become the explicit dilemma of modern humanity, just as he predicted.

Like all the best philosophers, Nietzsche made a heroic attempt to give a solution to his problem. He gave his solution the name Übermensch, literally translated ‘overman’, although it’s more often translated (somewhat painfully to us) as ‘superman’. Mere man is not a creator of value; his individuality proves to be insufficient to achieve that. His only dignity is that he may be a bridge to something higher: “The ape is an embarrassment to man; just so will man be an embarrassment to the overman.” The overman is that higher type of individual who has an absolute self-confidence in his power, and through the powerful assertion of his individuality, values may once again be created: not by peoples, not clothed in the spurious authority of a beyond, but for the first time in a specifically individual assertion of values through individually-justified action. And these values must be created, not appropriated as something already existent.

Nietzsche did not claim to know in detail what the overman would be like. He did think that the overman will have fellows, metaphorical brothers, but he must be an individual though and through: the future genius is a non-genus. That’s one reason why the Nazi appropriation of the Übermensch concept for the master race is outrageous to all Nietzsche scholars. Nietzsche expressed contempt for anti-Semites and for propagandists of Germanic racial superiority. Modern man, mass man, whatever racial affiliation he may boast, is anathema to Nietzsche. It is an absurd dream of contemporary culture that we – anyone at all – just by ‘being ourselves’ can surpass the ancient creativity of entire peoples. Most individuals are too small for the task (the crowd chants “We’re all individuals!” – Monty Python, Life of Brian). Any person can try to live according to what he calls “my own values,” but they are usually not his own values: they are bits and pieces picked up in the bazaar of modernity, and he has no idea where they came from. Nothing is more obvious to Nietzsche than the fact that people don’t generally know how to create values.

I think Nietzsche provides a powerful indictment of modernity. Of course, Nietzsche may simply be wrong that the only values with any value (so to speak) are those a powerful individual creates. Personally, I believe that he is wrong. That is, I accept his claim that values must be created by individuals, but I deny that a value-creating individual must be a Nietzschean overman. Furthermore, I think that there are values associated with being human whose validity extends beyond the human self-creating context, to apply to rational beings in general. In that way, I am a Kantian. Sure, the individual as modern multi-culturally sensitive individual cannot create value; but I think it is possible to retain a sense of individuals legislating values while shedding the overman’s sense of absolute separateness from other rational individuals.

Why is modern man so agonized still? I don’t know. But I won’t be totally surprised if Nietzsche turns out to be the first great philosopher of the twenty-first century too.

Eric Walther taught philosophy from 1967 and computer science from 1983 at the C.W. Post Campus of Long Island University; he retired in 2003. He holds a PhD in Philosophy from Yale University, and an MS in Computer Science from Polytechnic University.

The Kantianism of Hegel and Nietzsche by Robert Zimmerman