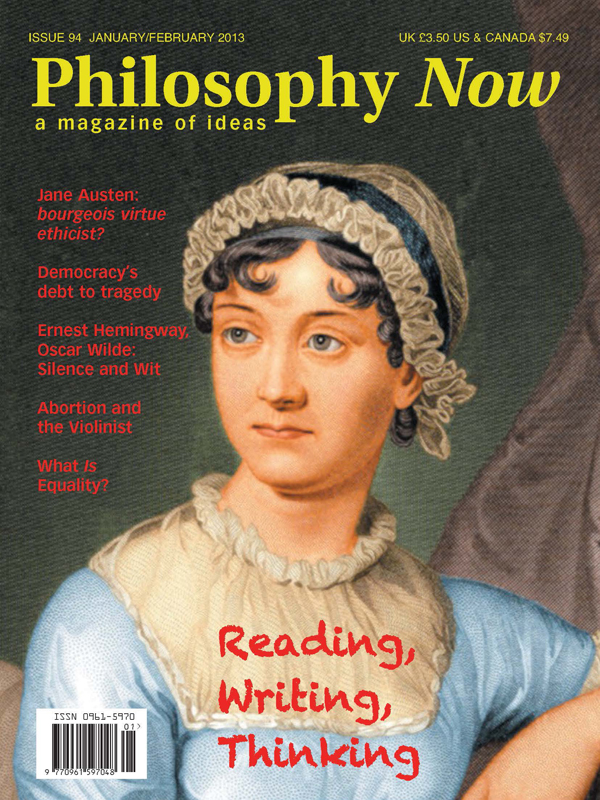 The first few articles in this issue look at literature and its contributions to ethics, to political philosophy, and to our understanding of the nature of language. We asked the very philosophical novelist and short story writer Tibor Fischer to kick things off with a few words about the relationship between philosophy and literature.

Meghan Bidwell ponders language and silence in the short stories of Raymond Carver and Ernest Hemingway.

The Twin Souls of Oscar Wilde and Friedrich Nietzsche

Yahia Lababidi meditates on the aesthetics and ethics of two great contrarians.

I Re-Read, Therefore I Understand

A Matter of Consent

Simon Smith argues that many discussions of abortion miss the point.

Alistair MacFarlane considers the being and times of the writer of Being and Time.

What Are The Most Important Things To Know?

The following answers to this question of wisdom each win a random book.

“Wad Some Power The Giftie Gie Us”

Tim Madigan takes up a very gentlemanly system of morals.

Where Is My Itch?

Raymond Tallis is itching to find out.

A User’s Guide to Thought and Meaning by Ray Jackendoff

Nikki Dekker doesn’t think too much of Ray Jackendoff’s book.

Jonathan Barfield argues that an Existentialist trumps a Christian interpretation of this popular Disney parable.