Alistair MacFarlane considers the being and times of the writer of Being and Time.

Martin Heidegger provokes an extreme and polarised response to both his philosophy and his life. He has been hailed as the greatest philosopher of the twentieth century, compared to St Augustine, considered a profound analyst of the ills besetting modern philosophy and modern life, as well as being called the greatest charlatan ever to claim the title of philosopher, and dubbed a gullible and self-important Nazi. The vehemence of the reaction to his philosophy stems from his direct challenge to the hegemony of analytic philosophy, and in particular, to the idea that philosophy is the handmaiden of science. The virulence of the attacks on his personal life stem from his involvement in the catastrophic political events in Germany during the 1930s and 40s.

Martin Heidegger was born on 26th September 1889 to a poor Catholic family in the quiet Schwabian town of Messkirch in the Black Forest district of Baden-Württemberg, in southern Germany. His mother Johanna (née Kempf) and father Friedrich were locally born and bred. Friedrich was a master cooper and the sexton of St Martin’s Church. In 1903, awarded a church scholarship, young Martin went to boarding school in Konstanz, and thence to high school in the local university town of Freiburg. He was being prepared for the priesthood in deeply religious surroundings; but then he came into contact with both modern (Brentano) and ancient philosophy (Aristotle), and his life began to change. In 1909 he left high school to become a Jesuit novice, only to be discharged after a few weeks on the grounds of heart trouble. Since he had no further heart problems, one wonders whether the Order foresaw future conflict. Entering Freiburg University to study theology and philosophy, he suffered a crisis which made him break off training for the priesthood, and in 1911 turned to the study of philosophy and moral and physical sciences. He was conscripted in 1915, deemed unfit for combat, and assigned to postal and meteorological duties. Discharged from the army in 1918, he returned to Freiburg to become assistant to Edmund Husserl, the founder of phenomenology. Although initially mentor and student, and later colleagues and collaborators, their fundamentally different temperaments and approaches inevitably led to conflict and an eventual breakdown in relations. In 1917 Heidegger married Elfride Petri, a Protestant, by whom he had two sons, Jörg and Hermann. The marriage survived an affair in the 1920s with Hannah Arendt, one of his most famous students. 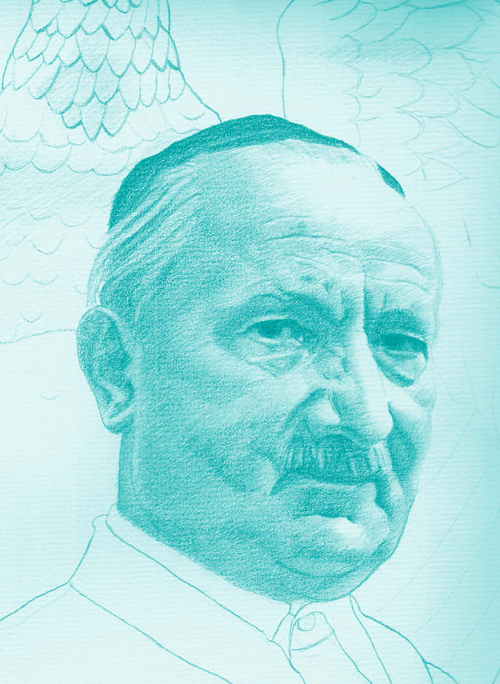 Since the middle of the seventeenth century philosophy had been dominated by Descartes’ picture of a mind distinct from the body it inhabited. A first step away from this dualism was taken at the end of the nineteenth century by Husserl, who shifted philosophical focus from the entities of our experience to our experience of these entities. Husserl was a mathematician, and was interested in building logical structures dealing directly with the phenomena of experience. Heidegger went much further, decisively breaking free from the shackles of Cartesianism: he saw cognition and the use of language as firmly based on our innate capacities and on a bodily immersion in the world. Both men’s work was bold and highly original, representing a direct challenge to an approach to a philosophy which sought to emulate science. Heidegger had left religious studies for philosophy, and was a classicist who sought to return to the ancient, original concerns of philosophy, as he saw them. His approach has had much more appeal to literary-based academics than to scientifically-inclined ones. As a result, the chasm that had been opening up since Kant (1724-1804) between so-called ‘analytic philosophers’ (scientifically inclined and mostly Anglo-Saxon and English-speaking) and ‘continental philosophers’ (a convenient label for all the rest) has grown dramatically wider.

In his doctoral dissertation of 1914 Heidegger studied the relationship of logic to psychology. His habilitation thesis, necessary for him to be approved as a university teacher, examined the work of the medieval scholar Duns Scotus, and in his habilitation lecture he argued that the significance of time went far beyond the mere measurement of duration. (These were all strong indicators of what was to come, but Heidegger published nothing further until 1927.) In 1922 he was appointed to teach philosophy in the University of Marburg, about 80 kilometres from Frankfurt. There, away from his mentor Husserl, he found his own highly idiosyncratic voice, and laid the foundations for his masterpiece in nearly a decade of intensive reading, thinking and lecturing. Former students, including Hans Georg Gadamer and Hannah Arendt, recalled lectures of unparalleled brilliance. As he always lectured from carefully prepared written material, these students had the rare experience of seeing a work of genius emerging.

The masterwork Being and Time (Sein und Zeit) was published in 1927. It attracted instant attention. He already had a cult following among phenomenologists, but now he attained international fame. In 1928 he was invited back to Freiburg to succeed Husserl, who had retired. Heidegger became, and remained, the leading figure of the phenomenology movement.

Being and Time defies concise summary. It is one of the densest, most carefully thought out and distinctive contributions to philosophy ever made. It was never finished, and only the first parts were published. But it made, and continues to make, a huge impact, producing acolytes and denigrators in equal measure.

In Being and Time Heidegger was addressing the fundamental question: What is Being? What is it to be human – to be you or I; not a detached mind, but a feeling entity, immersed in and totally engaged with the world? He called such an entity Dasein. The word translates as ‘there-being’, but the translation is usually inverted to ‘being-there’. In colloquial German it means ‘existence’. The first English translators kept the German word, and ‘dasein’ is now a standard English term in phenomenology. (When first reading Heidegger it is helpful to mentally substitute for Dasein some familiar common term such as ‘humanity’ or ‘human being’, as appropriate.)

Heidegger’s world is very different from Descartes’ – it is the world of everyday experience; and in Being and Time he sought to slaughter the most sacred cow of philosophy, the preeminence of the intellect over everyday skills. He distinguished two distinct ways in which we relate to entities in the world, calling them ‘ready-to-hand’ (zuhanden) and ‘present-at-hand’ (vorhanden). Readiness-to-hand he illustrated by a famous example of a skilled craftsman using a hammer. The hammer is seen not as an isolated physical object, but as a ‘for-use-in-hammering’ – something ready to the craftsman’s hand which he wields skilfully but without conscious thought. Should the hammer break, the pieces are now regarded as present-at-hand: as a collection of new objects, not fit for any immediately recognisable purpose, and requiring conscious thought to decide how to effect any usefulness from them. These ideas were well ahead of their time, but are now commonplace both in philosophical criticisms of artificial intelligence and in applied psychology (see for example Daniel Kahneman’s Thinking, Fast and Slow, 2011).

Following Being and Time’s great success, Heidegger published little in the 1930s. His philosophical views shifted, placing less emphasis on the centrality of Dasein. Heideggerian scholars – a growing band – refer to this as die Kehre (the turn), and some have likened it to the change from early to late Wittgenstein. Heidegger himself always emphasised the continuity in his thought. He was highly organised, keeping a carefully maintained and meticulously organised record of all his lectures, notes, papers, books, seminars and correspondence. The collected works will eventually fill over 50 volumes. In later years much of his work was done at a cottage in the Black Forest where he lived a simple life, free from the predations of technology, and dressed in traditional Schwabian clothes.

The 1930s were a dark decade in Heidegger’s life, and those years still cast a persistent and deep shadow over his reputation. He deplored many aspects of the modern world, and writing in 1948 to former student Herbert Marcuse, said that he had “expected from National Socialism a spiritual renewal of life in its entirety, a reconciliation of social antagonisms and a deliverance of Dasein from the dangers of communism.” In 1933 he joined the National Socialist Party, to allow him to be put forward for the Rectorship of the University of Freiburg. However, refusing as Rector to support the removal of two anti-Nazi Deans, he resigned the Rectorship in 1934, but publicly supported the Nazi programme of educational reform. Then, having realised he had made a terrible choice, he tried to recover from the consequences. By the autumn of 1944 he had fallen so far from favour with the Nazi hierarchy that he was humiliatingly drafted into the Volkssturm (the ‘People’s Storm’, a sort of Nazi Home Guard) and was sent to dig anti-tank ditches along the Rhine. After the war, the DeNazification Committee banned him from teaching. The ban was lifted in 1951, and he was appointed to an emeritus professorship in Freiburg, in which he remained.

Many people behaved abominably in the Germany of the 1930s and 40s, including academics, and Heidegger’s behaviour by no means plumbed the depths to which some of his colleagues descended. But what most have found unforgivable was his complete silence after 1945 on Hitler, Nazism and the Holocaust. On condition that it was published only posthumously, he gave an interview on 23 September 1966 to Der Spiegel (it was published in June 1976), of which George Steiner has said “it is masterly in its feline urbanity and evasions.” Heidegger died in Freiburg on May 26th 1976, and was buried in Messkirch beside his parents in a graveyard he passed every day on his way to school. The gravestone is inscribed with a solitary star. This refers to a line he wrote in 1947: “To think is to confine yourself to a single thought that one day stands still like a star in the world’s sky.” But there are many stars in the philosophical firmament.