A Mind is a Wonderful Thing to Meet

“My mind does not simply receive impressions. It talks back to the authors, even the wisest of them, a response I’m sure they would warmly welcome. It is not possible, after all, to accept passively everything even the greatest minds have proposed. One naturally has profound respect for Socrates, Plato, Pascal, Augustine, Descartes, Newton, Locke, Voltaire, Paine, and other heroes of the pantheon of Western culture; but each made statements flatly contradicted by views of the others. So I see the literary and philosophical tradition of our culture not so much as a storehouse of facts and ideas but rather as a hopefully endless Great Debate at which one may be not only a privileged listener but even a modest participant. It was this last perception that led to the creation of ‘Meeting of Minds’.”
– Steve Allen, Meeting of Minds, p.2, (Prometheus Books, 1989)

Like many people who find themselves in the profession of teaching philosophy, I’ve often wondered just what got me started down such a path, especially since I did not come from an academically-inclined family. Somehow the clash of ideas has long fascinated me, and I attribute this at least in part to my watching a unique television program that appeared on the Public Broadcasting Network back when I was in high school. Entitled Meeting of Minds, it aired from 1977 through 1981, and was the brainchild of the noted comedian, songwriter and talkshow host Steve Allen (1921-2000). Best-known perhaps for being the first host of NBC’s The Tonight Show, Allen was famous for his quick wit, his wonderful ensemble of character actors (including Tom Poston, Don Knotts, Pat Harrington, Jr. and Louis Nye, who often greeted him with a jaunty “Hi-Ho, Steverino!”), and his ability to put his guests at ease, and thereby elicit fascinating tales from them. It was this latter ability, coupled with his voracious reading and autodidactic tendencies, which was the impetus for Meeting of Minds. The concept first came to him when he was hosting The Steve Allen Show in 1959, but for various reasons he was unable to put it into practice until almost twenty years later.

As the above quote demonstrates, his idea was to have actors portray historic individuals engaging in spirited, at times heated, debates, over issues such as racism, women’s rights, crime and punishment, and religious toleration – timely topics in the mid-Seventies to be sure, but timeless topics as well, as exemplified in the words of such individuals as Theodore Roosevelt, Cleopatra, Thomas Paine, Florence Nightingale, Thomas Jefferson, Susan B. Anthony, Galileo, Marie Antoinette, and Frederick Douglass. Sometimes the debate pairings were startling, even bizarre, as when Emily Dickinson upbraided Attila the Hun for his bad manners, or Elizabeth Barrett Browning expressed shock at Niccolo Machiavelli’s political views. But for the most part one soon suspended one’s disbelief during the lively exchange of ideas between individuals who had lived decades if not hundreds of years apart – such as Oliver Cromwell and Daniel O’Connell debating the former’s invasion of Ireland and its aftermath; or the Marquis de Sade arguing with Cesare Beccaria over the topic of torture; or Thomas More and Karl Marx discussing the possibilities of a true utopia on earth. Allen, who wrote the scripts as well as acted as the genial host, kept things going at a lively pace, and remained as true to the historical record as was possible given the necessity of having the characters engage in dialogue rather than quoting verbatim from their collected works. No doubt his ability to keep Tonight Show guests such as Jonathan Winters, Jack Kerouac and Carl Sandburg from going too far afield served him in good stead when dealing with Socrates, Emiliano Zapata, or St Augustine!

I was fifteen years old when I first saw the show, and already a big fan of Allen’s for his comedic skills. But this was my first introduction to such thinkers as Plato, Aristotle, Thomas Aquinas, Adam Smith, Voltaire, Sun Yat-sen or Bertrand Russell (the only character whom Allen could have actually interviewed, since he’d only died in 1970, just a few years before the program aired). There were twenty four two-part episodes in total, and I watched them over and over. This was before the days of videotape, so I had to wait for them to be repeated, which fortunately was on a regular basis.

As was Allen’s intention when he designed the show, it made me want to know more about the people presented and their ideas. I began to read books about them, and then delved into the thinkers’ own works, marveling as I did so how accurate Allen usually was in his depictions. This also helped to prepare me for learning about the thinking of these individuals in more detail when I got to college. And I actually earned my first money as a writer thanks to the show. I wrote a review of Meeting of Minds for my local newspaper, The Buffalo News, and received the princely sum of $10.00 – more money, in fact, than I’ve earned for almost anything I’ve written in the many years since – an economic lesson that Adam Smith, if not Karl Marx, would have appreciated. 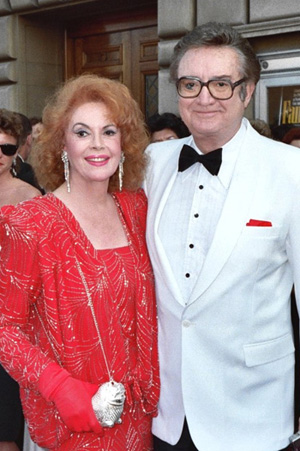 Best of all, after writing a fan letter to Allen enclosing the review, I received autographed copies of the published Meeting of Minds books from him, along with a friendly note thanking me for my interest and encouraging me to read as much as I could about the individuals presented on the show. A few years later, I got to meet Allen and his wife Jayne Meadows, who played most of the female roles in the series. They attended a conference in Buffalo, and I interviewed both of them for Free Inquiry, a magazine edited by the philosopher Paul Kurtz, himself a great fan of Allen’s. I encouraged Paul to republish the then out-of-print Meeting of Minds books through his Prometheus Books publishing house, and was delighted when he did so.

From seeing Allen talk at various conferences and events I later helped to organize, I could also see that he was a beloved public figure. I well remember once sitting at dinner with Steve and Jayne in a hotel restaurant. Several people sent drinks over to them to show their respect and admiration. Not wanting to hurt anyone’s feelings, the Allens made it clear to me that they were not drinkers themselves, and would appreciate it if I surreptitiously finished off the complimentary drinks for them. What else could I do? Thomas Paine would have been proud of me for this selfless supererogatory act.

Even though it has been several decades now since I last saw the show, I still remember Meeting of Minds with great fondness. Some of the episodes might elicit raised eyebrows, such as upon seeing Leon Askin, the actor who played the intimidating General Burkhalter in Hogan’s Heroes, portraying a scowling Martin Luther; or upon seeing John Hoyt playing both Voltaire and Bertrand Russell (rather appropriate, in fact, given the two mens’ biting wit and radical views). However, the only truly dated aspect of the show would likely be Allen’s sometimes rather wild 1970s-era suits.

Unfortunately, for various complicated copyright reasons, DVDs or downloads of the episodes are not currently available. Thankfully, though, the Prometheus Books editions of the scripts are. And appropriately enough, actors associated with the Steve Allen Theater in Los Angeles have lately been reviving the shows. Stars such as Ed Asner, Gary Cole, Robert Forster, Harold Gould, Joe Mantegna, Wendie Malick, Ron Perlman, and Jean Smart, have taken part in live stage performances and readings of the scripts, helping to bring Allen’s world back to life.

Another unexpected legacy of the show can be seen in the work of the acerbic comedian Bill Maher, a friend of Allen’s who considered him a mentor. Maher hosted his own adaptation of Meeting of Minds, originally on his Politically Incorrect (a show that Allen himself often appeared on) and now on HBO’s Real Time. In contrast to Allen, he does not bring together actors portraying historic characters, but rather makes unexpected pairings of real-life politicians, social activists, entertainers, and other assorted celebrities, yet with the same sort of debates in mind. Allen’s influence lives on.

There is a timeless quality to the original Meeting of Minds that still makes it a good introduction to philosophical dialogue and civil discourse. Allen wrote that “I perceive myself as occupying a middle ground between scholars and the people. At the moment, however, the middle ground seems very thinly populated. It might be likened to a no-man’s-land or barrier, which prevents, rather than facilitates, communication between the academy and the street, between gown and town” (Meeting of Minds, Second Series, p.1). So Steve Allen did the world of ideas a great service by using his influence, his talents, and his love of learning to create a show that truly did bridge this gap, and I will forever be grateful to him. Hi-ho, Steverino, wherever you are!

Tim Madigan believes that a long time ago he was Attila the Hun. Or Jabba the Hut – he’s not sure which.

The Geography of Philosophy