Alistair MacFarlane on a long life looking into language and logic.

Quine was an outstandingly able logician who became America’s leading analytical philosopher. As a logician, he was keenly aware of the wider implications of Gödel’s Incompleteness Theorem of 1931: if logic was unable to capture the truth of all that mathematics can say, how could everyday language fully describe the world and our experience in it? Quine addressed this crucial question over many decades of painstaking and often controversial work. As a result, he produced three Theses of Indeterminacy: the indeterminacy of translation, the inscrutability of reference, and the underdetermination of science. He was free from self-doubt, and largely impervious to criticism. When asked why he had totally ignored consciousness in his work, he urbanely replied that he was not conscious of having done so. 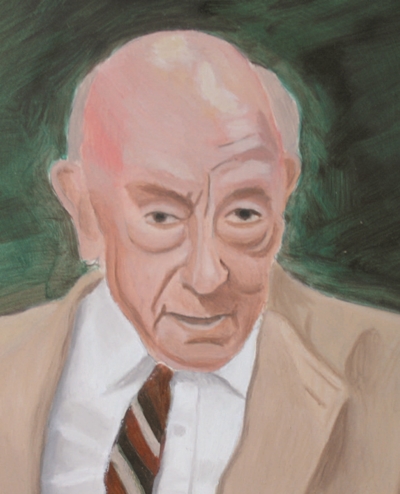 Willard Van Orman Quine was born in Akron, Ohio on 25th June 1908. His paternal grandfather, Robert Quine, grew up in a thatched cottage on the Isle of Man, between England and Ireland. Like many Manxmen, he became a merchant seaman. Leaving ship in New York, Robert made his way to Ohio, where there was a large Manx colony in Cleveland, and found work as a machinist in Akron. Willard’s paternal grandmother, Katherine Motz, was born in Fronhofen in the Rhineland Palatinate, coming to Akron as a child. His father, Cloyd Robert Quine, was born in the German quarter of Akron, and started work in the office of a machine foundry. He later founded his own firm manufacturing tyres, and subsequently prospered. Willard’s mother Harriet (née Van Orman) was born in a village near Akron, and was of Dutch descent. Quine, who made a hobby of geography and etymology, was never able to trace the origin of the name Van Orman, with the hint of aristocracy that his mother cherished. She went to Buchtel College, the nucleus of the eventual University of Akron, and became an elementary grade teacher. He had an older brother, Robert Cloyd.

In his autobiography The Time of My Life (1985), Quine gives an affectionate description of growing up in a small Midwest town in the early twentieth century. He did well at school, but discovered a lifelong trait of mild resistance to instruction. As a freshman in nearby Oberlin College in 1926, after briefly contemplating a career as a journalist, he decided to major in mathematics, with mathematical philosophy and logic. At the end of his junior year, his mother, knowing of his increasing admiration for Bertrand Russell, made him an inspired gift of the three volumes of Russell’s Principia Mathematica (1913). This set the course of Quine’s future life. Learning that Alfred North Whitehead, the co-author of the Principia, was at Harvard, he resolved to go there for postgraduate study. Supported by his Oberlin professors, he won a University Scholarship to Harvard, where he was to spend the rest of his professional life.

In Harvard Quine attended both Whitehead’s lectures and the Sunday evening soirées given by the Whiteheads. Quine was entranced by Whitehead, who seemed to him to be “as old as the hills,” and by the Whiteheads’ outspokenness. Mrs Whitehead disapproved of Russell, saying that he “lolled on the Riviera” while her husband laboured away at the Principia. This was both untrue and unfair, but excitingly irreverent. Whitehead was equally indiscreet, but more genial: “Bertie thinks I’m muddleheaded,” he said, “but I think Bertie’s simpleminded.” It was a revelation for the young man from Ohio. Quine chose for his PhD topic a generalisation and simplification of the Principia. When he suggested this to Whitehead, Whitehead’s reaction delighted him: “That’s ripping, old fellow! Right jolly!” Midwest Oberlin had met Edwardian Cambridge.

Completing his thesis in only two years using his own axioms, rules and definitions, Quine reduced the Principia to a mere 290 pages. Submitting only three hours before the deadline, Quine received his doctorate at the age of 23, and was swiftly awarded the Sheldon Travelling Fellowship for the following academic year. As a Sheldon Fellow he visited Europe, making valuable contacts with the core proponents of European philosophical logic: the Vienna Circle, Rudolf Carnap in Prague, and Alfred Tarski in Warsaw. Towards the end of his travels he received the wonderful news that he had been elected to a Junior Fellowship in Harvard’s select Society of Fellows, in which he remained, with increasing seniority, until his retirement.

In 1941, feeling that the free world was collapsing in the face of a totalitarian onslaught, Quine sought to make himself useful in cryptoanalysis, enrolling in a course run by the Navy. He entered the Navy as a lieutenant in September 1942, and found the eight-hour day a restful change from academic life. During the rest of the war he worked with the Navy’s cryptoanalysts, attaining the rank of lieutenant-commander. He resumed his duties in Harvard in February 1946.

In 1930, shortly after arriving at Harvard, Quine married Naomi Clayton, whom he had met at Oberlin, and with whom he had two daughters, Elizabeth and Norma; but they divorced in 1947. The following year he married Marjorie Boynton, whom he had met in the Navy. They had a son and daughter, Douglas and Margaret. Marjorie died in 1998. Quine retired from Harvard in 1978, but continued to do active work in philosophy for the following two decades. He died on Christmas Day 2000, and was buried in Boston.

Quine made major contributions to the development of logic, the philosophy of language, epistemology, and metaphysics. After establishing himself as a leading logician, he evolved into the quintessential language philosopher. He shared the commitment of the Vienna Circle to empiricism, and their belief that philosophy should be pursued as part of science. In a famous paper Two Dogmas of Empiricism (1951) he argued that we must evaluate experiences against our entire body of beliefs in a holistic manner, abandoning any distinction between analytic and synthetic truths, and that no special status should be accorded to mathematics and logic. He also emphasised the double role played by philosophers – as theory builders and theory users. In From a Logical Point of View (1953) Quine challenged the prevailing orthodoxies in both the philosophy of language and ontology (the philosophical study of being). In his masterwork Word and Object (1960), he treated natural languages (such as German, Mandarin, English, etc) as arising from socially instilled dispositions to respond to socially observed stimuli. He then pinpointed some anomalies and conflicts implicit in a language’s referential apparatus, clarified semantic problems associated with the imputation of existence, and put forward arguments for repudiating or admitting various categories of supposed objects. Few major contributions to philosophy have been so clearly written. The clarity and forcefulness of its arguments are nearly overwhelming. In The Web of Belief (1970), written with James Ullian, he also gave a splendidly clear and engaging introduction to analytic philosophy. Lastly, his Pursuit of Truth (1990) gave a succinct summary of his philosophical position.

Quine became a great admirer and lifelong friend of Rudolf Carnap. They corresponded for thirty-five years about their different strategies for tackling a central problem of philosophy: How can we justify our beliefs? In particular, how do we judge between the competing roles of experience (the empirical approach to knowledge) and intuition guided by reason (the analytical approach)? Carnap and the Logical Positivists of the Vienna Circle favoured the use of formal languages (such as mathematics and logic); but Quine the master logician was keenly aware of the shortcomings of such an approach, and favoured using natural languages. Their famously long-extended argument could be said to have ended in a draw. They agreed much more than they disagreed, and with suitable adjustments on both sides, can be seen to be saying much the same thing. Specifically, both defended a strong empiricism which insisted that observation is the only source of information about the world, and that whatever is not provided by experience can only be generated by thought. When Carnap died in 1970, Quine gave a moving tribute to his friend, saying that he regarded him as the true heir of Russell. Russell, Quine said, had talked about deriving the world from experience by logical construction, but Carnap set about doing so in earnest. The full correspondence, and Quine’s tribute, are in Dear Carnap, Dear Quine (1990).

Most philosophers of the twentieth century had thought that philosophy was concerned with concepts, and that science was concerned with facts. Quine’s great achievement is that this simplistic distinction no longer seems tenable. He has changed the way we think about language and its relation to the world.

Against Stupidity in the Media

How To Change Your Mind