George A. Romero’s The Night of the Living Dead (1968) is often perceived as the first zombie film, but zombies have existed in the American consciousness since as early as 1929, when journalist William Seabrook (1884-1945) published The Magical Island. Seabrooke is credited with introducing the word ‘zombi’ into the American vernacular. A few years later, Bela Lugosi (1882-1956), who first appeared on screen as Dracula in 1931, starred in the 1932 film, White Zombie. But it was the 1954 novel by author Richard Matheson (b. 1926), I Am Legend, that helped to create the zombies we know and love today. (One interesting feature of Matheson’s novel – credited by Romero as inspiring his 1968 film – is that it wasn’t about zombies at all. It was about vampires.) Now writers like Isaac Marion, author of the 2010 debut novel Warm Bodies, are breathing life back into the mindless, hungry hordes through… love, believe it or not.

While Marion works on the promised Warm Bodies sequel, February saw the film adaptation of his novel debut on silver screens across America. Like I Am Legend (and despite the 57 years in between the two novels), Marion’s fiction is based on the idea that zombification is a disease. And where there’s a disease, there’s a cure. For Marion, that cure isn’t some concoction a desperate scientist developed in his basement after the loss of his wife and daughter (as it was for Matheson); it’s love. The film portrays Marion’s idea visually, by showing the main zombie character, simply named ‘R’, as having his heart re-animated after meeting a young human woman. In the novel, ‘R’ comes ‘alive’ by experiencing the emotions for said young woman through eating some of her deceased boyfriend’s brains. ‘R’ keeps a portion of the boyfriend’s brains to continue (through consumption) to learn more about the girl. In the process, ‘R’ develops a conscience that begins to infect the other zombies around him. Is it possible to infect the human population in the same way, thereby saving our world through the power of love?

Not according to Max Brooks (b. 1972), son of Mel Brooks and Anne Bancroft, and the author of The Zombie Survival Guide (2003) and its sequel, World War Z (2006). Brooks’ take on zombification mimics the idea of terrorism in that it is a mindless hunger that doesn’t stay hidden in some dank Transylvanian castle, but specifically comes out looking for victims like you. And when you’re found, you will be devoured completely; or worse, infected (converted) – doomed to perpetuate that same evil for the rest of your miserable days. In Brooks’ world Israel is initially the only country to take the zombie threat seriously, closing its borders to everyone but uninfected Jewish and Palestinian people. Brooks’ work is often seen as critical of American isolationism, that is, an American reluctance to get involved in foreign conflicts, and his World War Z, chronicling the decade following his zombie outbreak, shows the disastrous results of isolationism on a mass scale. His Zombie Survival Guide can be read as a manual for individuals living in a world gripped by the terrorist threat, also known as the zombie apocalypse. The 2009 film Zombieland was undoubtedly influenced by Brooks’ writing, following a ‘survival guide’ set of rules in order to try to ensure that the uninfected humans stay that way. 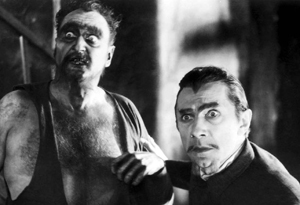 More interesting, however, is how Brooks’ ideas tie in with some of Hannah Arendt’s thoughts on the nature of evil, as expressed in her 1963 book on the Eichmann trial, Eichmann in Jerusalem: A Report on the Banality of Evil. Watching Adolf Eichmann’s evidence at his trial in Jerusalem led Arendt to the conclusion that his enthusiastic participation in the murder of millions of people during the Holocaust arose not from a pathological hatred of Jews but instead from his uncritical acceptance of the structures, procedures and ideology surrounding him, and from a lack of empathy preventing him from fully realizing the suffering he was inflicting on others. Rather than being a monster, Eichmann was a banal, obedient conformist of limited imagination. Arendt’s idea of the banality of evil makes clear sense of the analogy that Brooks draws between terrorists and zombies.

Brooks’ post-apocalyptic world is truly disturbing – if only for the too-realistic similarity between his zombies and those twenty-first century humans whose own mindless hunger for violence terrorizes the rest of the world. If love is the answer, as Isaac Marion would have readers believe in Warm Bodies, it had better show up soon.

On Being Thanked By A Paper Bag

Two Imperatives in Education: change of culture v. transmission of the status quo

The Art of World-Making