The most acclaimed and popular films in the zombie genre seem to be moral allegories in which the zombies function as catalysts forcing the surviving humans into improvised families and communities whose continued existence depends upon ethical adaptation. These microcosms of humanity offer filmmakers the opportunity to examine how people respond when their perceptions of the basic rules of the world change, and to critique how they make decisions based upon these new rules. In an apocalyptic landscape, people can no longer rely on making decisions based on dogmatic assumptions. Those are luxuries of civilization.

If the dead were to come back to life, there would be several models for ethical decision-making from which the survivors’ leaders could choose. Most involve assessing the problem, gathering all the information to identify potential courses of action, and then evaluating the likely consequences of those actions. One such model, originally conceived to guide decision-making by clinical psychologists but easily adaptable to a zombie-infested world, is Karen Kitchener’s ‘five ethical principles’ (see Foundations of Ethical Practice, Research and Teaching in Psychology, 1984). Kitchener’s principles are autonomy, non-maleficence, beneficence, justice, and fidelity. Simply stated, people should respect independence and individual choice; avoid harming each other; help when they can; treat others fairly, and forge loyalties. However, as with any ethical system involving more than one ‘basic’ principle, there can be conflicts of priority. Let’s briefly consider these principles as they might be applied in a zombie-overrun world. 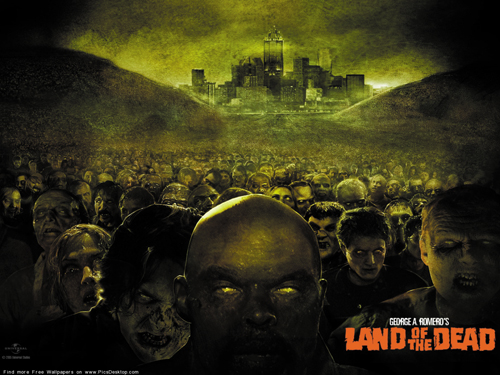 Firstly, these principles can only be put into action once communities have formed. In the gloomy tradition of zombie films, a character’s focus on their own personal survival or gain usually leads to that character’s downfall, or the downfall of their fledgling society. In a Time interview from 2010 zombie movie director George Romero remarked, “The humans are the ones I dislike the most, and they’re where the trouble really lies.” In contrast to the mindless zombies, human beings are able to think rationally about their actions; therefore they are responsible for examining their motives when they act and bearing the burden of their failures when they act incorrectly. Romero’s Night of the Living Dead (1968) depicts initial confused reactions to an unknown enemy. The two leaders that emerge are Ben and Harry, and their struggle for dominance is all the more engaging because the men represent two polarized aspects of their era: a Caucasian male accustomed to having power and influence, and an African-American male used to dealing with oppression. Harry’s feelings of entitlement for himself and his family affect the way he interacts with the other survivors; his insistence on remaining in their basement shelter poses a threat to the entire group. Although Ben is also very concerned for his own survival, he understands the importance of working with others for a common goal, and that it is to the group’s benefit to get out of the trap of isolation and find other survivors. When the conflict between Ben and Harry comes to a head, Ben is forced to make a choice that violates Harry’s autonomy for the greater good.

In 28 Days Later (2002), the protagonist Jim is not a leader. Initially, he follows the direction of others and seems to be more of a mediator in the process of making decisions. Jim remains empathetic to the needs of others because he has been spared the worst of the carnage, having been in a coma for 28 days. At a turning point in the film, he’s forced to take on a leadership role when his group encounters a squad of soldiers. Major West, their commanding officer, is familiar with making decisions that minimize potential damage to his men from an enemy: he is focused on the needs of his group while discounting the potential harm to others, who to him are irrelevant. West’s ability to weigh ethical principles is influenced by whether or not he considers a person part of his group. Because the one dissenting voice in West’s group has been depicted as the black sheep, the group can rationalize West’s decision to eliminate him. Jim realizes that there are alternatives to the soldiers’ choices that they have failed to consider. He does not have loyalty to the men he meets, but does have a sense of loyalty to the women.

In TV epic The Walking Dead, the protagonist Rick also emerges from a coma having missed the initial outbreak. Rick and his friend Shane become joint leaders of a group. Though both had roles of authority as police officers in their former lives, they have very different styles of leadership. At one point the main characters gather to decide the fate of an outsider. Shane argues that they should kill him to protect the group, and after some debate the group agrees, though acting on that decision proves harder than expected. Although Rick respects the group, he understands that the choices they make will inform the kind of society they will develop. This convinces him to keep their captive imprisoned, thus avoid harming him unnecessarily, and retaining a sense of justice.

In Land of the Dead (2005), the powerful figures are Kaufman and Riley. Kaufman’s every action is motivated by personal self-interest. He runs a highly desirable luxury community isolated from the apocalyptic wasteland. Riley is a leader of an oppressed group on the periphery of Kaufman’s utopia. Riley does not wish to live in Kaufman’s society, but would rather find a way to build his own niche in the new world. Clinging to the monetary and elitist values of his past, Kaufman neither cares about the autonomy of those around him nor considers how his behavior is harming others. When Riley chooses to help Kaufman, it is because he sees an opportunity to keep his friends from harm and to gain some personal benefit, demonstrating both beneficence and loyalty.

Although the premise of the zombie apocalypse itself may be far fetched, the ideas behind it are not. Environmental decay, war and destruction are realities in our rapidly changing society. Navigating this hostile world requires adequate leaders. We need to question the values that we look for in our leaders, as well as our own processes of decision-making. If we do not learn to make decisions in a way that ethically considers all of the options, and not just our own personal stake, then we are on a path of self-destruction.

Sarah Stone received her Master’s in Counseling Psychology from Lehigh University. When not reading books or watching films about the undead, she works as a Treatment Specialist.