A Short History of Western Thought by Stephen Trombley

David McKay fastens his seatbelt for A Short History of Western Thought.

In writing a history of Western thought one route would be to select some of the main figures and movements which have shaped the development of philosophy and examine them in detail. Another route would be to seek to give comprehensive coverage of the field, aiming to briefly include most of the significant thinkers in the tradition. In his concise survey of Western philosophy, Stephen Trombley, writer and filmmaker, opts for the second approach.

After a brief consideration of the question ‘What is Philosophy?’ – ending with Aristotle’s statement that philosophy begins with wonder – Trombley divides his study into four parts: ‘The Wisdom of the Ancients’ (Sixth Century BC to First Century AD); ‘Christianity Triumphant’ (First Century to Sixteenth Century AD); ‘The Scientific Revolution’ (Sixteenth Century to Eighteenth Century); and ‘The Landscape of Modernity’ (late Eighteenth Century to early Twenty-First Century). In Part 1, ‘The Wisdom of the Ancients’, all the most significant figures make an appearance, including Thales, Socrates, Plato, Aristotle, and the Greeks of the Hellenistic period. In Trombley’s telling of the story, Greek philosophy was characterised by a struggle between religious belief and science, the latter in the shape first of all of medicine. Thus he traces the contemporaneous development of philosophy and Hippocratic medicine, noting that physicians and philosophers influenced one another significantly. Eventually the mythological worldview expressed in Homer’s epic poetry was supplanted by the scientific speculations of Heraclitus and others. Disciplines such as mathematics, metaphysics, and politics also arose among the Greeks. By the time Roman power displaced that of the Greeks, ancient pagan ideas, mystery cults, and various philosophical systems, joined increasingly by Roman emperor-worship, were on the brink of confrontation with the tide of attraction of the Christian faith.

Part 2, ‘Christianity Triumphant’, surveys the history of Christian belief from the First Century AD up to the Reformation in around sixty pages. Trombley begins with a brief historical review of the Jewish roots of the Christian Church and the early spread of Christianity. He draws a rather simplistic contrast between the relationship of the Jews to their “fearful” God, and the “more approachable” nature of the Christian God, apparently embracing the often-discredited view that the God of the Old Testament is a different God from the God of the New Testament. After noting the “last gasp” of Greek philosophy in Stoicism and Scepticism, Trombley then outlines the development of Christian thought through to the work of Thomas Aquinas in the Thirteenth Century and the dominance of medieval Scholasticism. Some attention is rightly given to the rise of Islam and the development of Islamic philosophy, along with the role of Islam in transmitting Greek philosophy back to Western Europe at the start of the Renaissance in the Fifteenth Century.

Of course, every historian has a worldview that shapes their presentation of history, and in Trombley’s case this becomes evident in this second chapter, where, in contrast to the “deep enquiries” of Democritus, Plato and Aristotle, he claims that “what the Church had to offer was dogma rather than unfettered philosophical inquiry” (p.57). He clearly regards Christian belief, at least in its medieval form, as the enemy of genuine philosophical endeavour: “Faith, not knowledge, became the ruling paradigm,” Trombley writes. It is beyond the scope of this review to offer a critique of this stark and simplistic opposing of faith and knowledge, but this opposition has to be recognised as an important element in the author’s approach to the history of philosophy. It is therefore not surprising to find Trombley treating the Renaissance and the Reformation, together with the rise of modern science, in terms of the “liberation of the individual.” There is undoubtedly truth in this view; but a more nuanced treatment of the period would also mean recognising the importance of Christianity in providing an intellectual milieu conducive to the development of science, as well as the distinctly Christian colouring of the Northern Renaissance. The chapter ends with a sense of anticipation of the greater role that reason would play in subsequent philosophy. 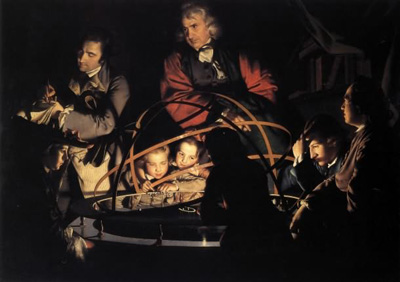 Joseph Wright: A Philosopher Lecturing on the Orrery

Part 3, ‘The Scientific Revolution’, covers the period from the Sixteenth Century up to the Eighteenth. All the greatest names are present, and some of the lesser ones. Trombley’s account of the Enlightenment gives a sense of the diversity of that movement, spread as it was over a number of countries. He notes how the significant developments in science in this period made an impact on diverse areas of culture, including on politics and government through a confidence in human reason freed from religious dogma. As we might expect, he regards the philosophy of Immanuel Kant (1724-1804) as the high point of the Enlightenment project, opening the way for a focus on the nature and the limits of human freedom; which focus, in Trombley’s view, characterises philosophy post-Kant.

Part 4, ‘The Landscape of Modernity’, by far the longest part of the book, covers the late Eighteenth Century up to the Twenty-First Century, giving a striking impression of the vast diversity of philosophical movements that have come, and often gone, during those years. Trombley manages to provide some general historical background as context for the developments in philosophy. However, the inherent difficulties of Trombley’s efforts to be comprehensive yet brief are most evident in this section. Many of the ideas and movements discussed are complex, and often difficult for beginners to grasp, and it would be almost impossible to present them briefly yet comprehensibly. But in the course of this chapter, Hegel receives three pages, Husserl and Phenomenology just under two, whilst Existentialism rises and falls in just over six. It is likely that those new to philosophy (presumably the intended readers of the book) would struggle to grasp all the ideas summarized in such a compressed treatment. Names and concepts come thick and fast, and the effect can be dizzying. The pace does not slacken as some of the main strands of Twentieth Century Post-Structural philosophy are considered. The chapter ends with some thoughts on the continental/analytic divide, suggesting that the two approaches may have rather more in common than they admit. The book itself ends with a short consideration of philosophy’s future, leading to Trombley’s conclusion that “The world can only improve if it is inhabited by people whose minds are agile, who take delight in understanding the arguments of others, and pride in making themselves better understood.”

Trombley’s style is readable and the book accessible. As long as readers realise that this is very much a bird’s-eye survey of a vast subject, and are aware of the author’s perspective, they will find it a useful introductory text that may well whet their appetite for more thorough treatments of the history of Western thought.

David McKay is Professor of Systematic Theology, Ethics and Apologetics at the Reformed Theological College, Belfast.

“Memorable Philosophy Professors I have Known”

The Bible – The Biography by Karen Armstrong

Philosophy, Life and Philosophies of Life

Can TV Drag Us Out of Our Cave of Ignorance?