Hope helps keep us alive and anticipating the next sunrise with joy rather than gloom. It enlivens projects and maintains focus. Hope is sustained by the confidence we have in our knowledge of the situation, although the possibility of being deceived, by others or ourselves, can undermine this confidence. Still, hope promises a time or place where things will be better, even if it seems we’re stuck in perpetual hell. Accounts through the millennia depict hell as a realm full of fascinating and ghastly demons, endless tortures, with Satan ruling with a fiery fist, and where hope is impossible. Such wild accounts seem as if they belong to another world. But The Shawshank Redemption (1994) portrays a worldly dimension of hell: prison.

Based on the novella Rita Hayworth and The Shawshank Redemption by Stephen King, the film begins in the state of Maine in 1947. A young, successful banker named Andy Dufresne (Tim Robbins) has been convicted of murdering his wife and her golf-pro lover. Having motive, opportunity, and no credible alibi, Andy nevertheless insists on his innocence until the end. When he enters Shawshank Prison – whose façade simulates a palace or ancient cathedral – Andy’s protestations of innocence fall on deaf ears. Every convict there says he has been betrayed by a biased jury, corrupt judge or incompetent lawyer – one exception being Red (Morgan Freeman), a long-time con who admits, and regrets, the murder he committed when young and stupid. Red is the narrator of the movie, and through his eyes the audience gains insight to Sartre’s renowned remark about hell being other people. At the same time, there are moments in Red’s story about Shawshank and Andy that illuminate the shortcomings in Sartre’s vision of hell. 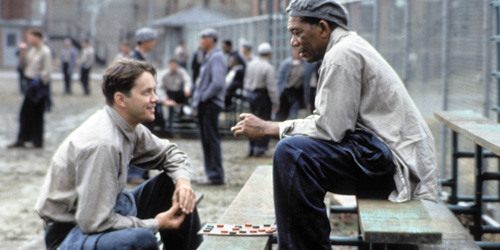 Sartre’s notion that ‘hell is other people’ perhaps begins with his analysis of ‘the look’ in Being and Nothingness (1943), where individuals are struggling to retain their freedom against others’ objectifying gazes. In Sartre’s play No Exit (1944), the phrase is preceded by the notion that the eyes of others are devouring. In the play, Garcin and Estelle eventually begin desiring one another; but Inez, trapped in the same room, maintains a relentless gaze upon them. Despite Garcin’s pleas, Inez insists that darkness will never come for the potential lovers and that she will always be watching them. It is her gaze and this sense of endlessness that condemns the potential lovers.

‘Never’ and ‘always’ form integral components of hell. In his study on hell through the ages, The Fear of Hell (1987), Piero Camporesi says that according to a medieval text, “The door of that fatal resting place of all evil will be locked by two great iron keys: by Never and by Always… And who can tell me how much suffering two so short syllables, Never and Always, which form horrible eternity, can bring?” (p.36)

Camporesi also notes that rather than separating the universe into halves (heaven and hell), numerous thinkers held that the universe has three floors: the top is heaven and the bottom hell, with the middle – that is, the human world – containing elements of both. Here humans get a sense of damnation by suffering from their own excessive indulgences.

The world of Shawshank Prison dwells on the middle and lower floors of this universe. When Andy Dufresne arrives, the prison veterans take bets on which fresh fish (new inmate) will cry for his mother after hearing the cell doors clanking tight for the first night. The man who cried died after a savage beating by the prison captain.

As a God-fearing man, the warden introduces new convicts to one rule: respect the Lord and never take His name in vain. After that, the warden continues, “the Lord looks after your soul, but your ass belongs to me.” There are also groups of inmates called ‘Sisters’ or ‘Bull Queers’ – sexual predators who enjoy violent force with their pleasures – including a little circle of Sisters who periodically assault Andy.

The warden determines which convicts receive favors, tough assignments, or harsh penalties. Notwithstanding his numerous citations of the Bible, the warden does not sustain general law. He becomes a law unto himself by mirroring the behaviour of Satan – arbitrariness, cruelty, and endless punishment. When Andy discovers that there is a witness who can confirm his innocence of the double murder, the warden has the witness murdered and gives Andy a month of solitary confinement. And when Andy warns that he will stop using his banking skills to help the warden launder prison funds into his own bank account, the warden adds another month of solitary.

Beyond Silence and Darkness

Are humans the only species to punish one of their own with solitary confinement? Solitary is one of the most widely used forms of punishment today, although in terms of its effects on the victim, ‘torture’ might be a more accurate term. It disrupts and disorients a convict’s sense of time and space, as the victim sees and hears nothing save for his own breathing and heartbeat. Being released from solitary and rejoining the other convicts conveys a perverse sense of freedom.

Red is not fooled by this grim irony. He points out that after many years in jail, the walls begin to define a man: “These walls are funny. First you hate ‘em, then you get used to them. Enough time passes, you get so you depend on them.” Such resignation echoes Sartre’s central themes in his lecture Existentialism and Humanism (1946), where he describes freedom as a project that demands on-going and resilient attention. Without such attention, one can quickly lapse into letting others or institutions define one’s self.

An example of resilience occurs when Andy, who is eventually granted access to the administrative offices, broadcasts a Mozart aria over the intercom. Red, like other inmates, is transfixed by the surprise of the heavenly voices pervading the prison yard: “It was like some beautiful bird flapped into our drab little cage, and made those walls dissolve away. And for the briefest of moments, every last man in Shawshank felt free.”

For this mischief Andy is confined for two weeks in solitary. Upon release his buddies are startled that he seems so relaxed, knowing the unique horror of no contact with the world for days on end. Andy reminds them of Mozart’s music, and how something so beautiful helps maintain an inner sense of hope. Most of all, as he reminds them, you can’t let the guards, warden, parole board, even other prisoners, destroy this inner sense. Here beauty and hope are interwoven.

Hope is… Another Person

Notwithstanding the existentialist insights of The Shawshank Redemption, several scenes highlight shortcomings in Sartre’s notion that hell is other people.

Andy is at first a fairly isolated individual. He first comes to know Red as a customer, since Red buys and sell contraband for the inmates. Through Red, Andy learns that prison is a mini-society: life at Shawshank contains potential alliances, collaborations and reciprocally fruitful associations, even in the relations between guards and inmates – including the warden and his right-hand captain.

Andy comes to recognize the need for some sort of general camaraderie. A poignant moment occurs during the early pleasant days of Spring when the warden needs a crew to tar a rooftop. Red bribes the guards to fix the selection process so that he and his buddies, including Andy, get to enjoy the outdoors. Overhearing the captain – the one who savagely beat the new inmate to death – complain about how he will lose a considerable portion of his inheritance to taxes, Andy risks his life to ask the captain if he trusts his wife. Before the insulted captain can push Andy off the roof, Andy quickly explains that there’s a law permitting the captain to give the inheritance to his wife and no taxes will be taken. Andy even offers his services to bring this about to the captain; all he asks in return is for the warden to reward Andy’s co-workers some cold beers for their hard work. For the time it took the convicts to drink three colds beers each, says Red, they felt like free men. Red and Andy realize a true friendship is emerging. They mull over their options: “get busy livin’ or get busy dying.” After this, Andy uses his considerable skills to expand and beautify the library, process the tax returns of the guards, intervene when old-timer Brooks threatens to stab an inmate, and even mentor a young convict so he can earn his high school diploma. Andy finally confides to Red how he has funneled some of the warden’s ill-gotten booty into private funds under a fictitious name, passport and social security, known only to himself. Red could have earned immediate parole by relaying this information to the warden. Red’s only response is joyful laughter at the situation’s absurdity and his friend’s brilliant strategy.

However, Andy does not tell Red about the tunnel he has been digging for the last twenty years. He is possibly doing his friend a favor while improving his own chances for escape. After all, it will require plodding through five hundred yards of sewage to get outside the prison walls, and Red is probably not up to it physically. Instead, after Andy’s escape, Red finally earns parole. He goes to a tree in a New England meadow where Andy told Red he would bury a package. Red finds it and, true to his word, Andy has left an envelope of cash and letter of encouragement for Red to join him in Mexico, which he does. 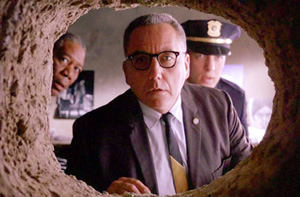 Who said anything about No Exit?

The conclusion to the film has sparked considerable debate. Stephen King’s novella simply ends with Red professing a litany of “I hope” expressions for freedom and eventual reunion with his friend. Although the film originally closed with Red taking a bus to Mexico, the final cut was changed to a panoramic shot of a Mexican beach, Andy and Red embracing. Before test audiences, the embrace version elicited far more enthusiastic responses than the bus-over-the-hill version.

The film critic Mark Kermode makes a compelling argument in his book The Shawshank Redemption (2003), that the final film version is aesthetically and thematically unwarranted: it panders to popular sentiment, and underestimates the audience’s ability to understand the hope illuminated by the bus taking off for Mexico. In any event, the novella and the film both present a sharp contrast to the ending in No Exit. Sartre concludes with a scenario of his three individuals resigning themselves to the fact that they will never escape and always haunt one another. By contrast, Red and Andy either enjoy or envision a moment where the infinite scrutiny of others is replaced with the hope for the freedom in sharing warmth, joy and good humor with another. This freedom is called friendship.

Alexander E. Hooke teaches philosophy at Stevenson University, USA. He is editor of Virtuous Persons, Vicious Deeds, and a co-editor of Encounters With Alphonso Lingis.

The Functions of Art

The Case Against Conceptual Art

The Oxford Handbook of Aesthetics

Out Of The Blue