Alejandra Mancilla uses an example from Robert Nozick to question the claims to ownership made by breeders of genetically modified organisms.

John Locke’s justification of property rights started with the idea that mixing one’s labor with previously unowned [natural] physical objects entitles one to ownership of the resulting product. American philosopher Robert Nozick presents this idea in Anarchy, State and Utopia (1974), but notes that things are not as straightforward as they might seem. On the contrary, Nozick writes, there are instances where by mixing one’s labor with something in nature, one loses one’s labor without making any gain: “If I own a can of tomato juice and spill it in the sea so that its molecules (made radioactive, so I can check this) mingle evenly throughout the sea, do I thereby come to own the sea, or have I foolishly dissipated my tomato juice?” The answer is obviously the latter, he argues; and he suggests that what Locke really had in mind was that what one ought to own is not the full resulting product of one’s labor, but rather the value added to the original product before the laboring took place.

I think that one of the most common arguments supporting patents over genetically modified organisms (GMOs) rests on the same misunderstanding. The argument, in a nutshell, is that companies should acquire intellectual property rights in the form of patents over animal or plant varieties they have ‘created’. However, the requisite for a variety to be counted as a ‘creation’ is pretty minimal. According to the European Patent Office, to obtain monopoly rights over, for example, a corn variety for twenty years and enjoy all the economic benefits that come with it, it might be enough for a company’s scientists to change one gene in the plant out of the 32,000 it contains… as long as “the technical feasibility of the invention (sic) is not confined to a particular plant or animal variety” (i.e., as long as they can reapply the process). If claiming ownership of an organism by changing a few of its genes among thousands is not analogous to claiming the sea by changing a few of its molecules, it is at least analogous to claiming Loch Ness by the same procedure.

Below I present three possible defenses that might be given by those who support intellectual property rights for companies over GMOs. All three defenses rely on different interpretations of Locke’s labor-mixing argument. I’ll show why they do not work, and conclude that those who want to defend intellectual property rights over living organisms need to appeal to other types of justification to be convincing.

All The Effort Invested!

The first and probably most powerful argument for defending intellectual property rights over GMOs in a Lockean fashion relies on desert: since it took a lot of effort to arrive at the result, that effort ought to be rewarded.

This argument may be separated into three facets. First, developing a type of rice enriched with vitamins, or a salmon that reaches its adult size much faster than its normal counterparts, is a massive undertaking that requires the ingenuity, creativity, and effort of a team of dedicated experts. Second, it requires a lot of money, invested at the risk of not getting anything in return – as well as an expensive and specialized infrastructure needed to carry out the experiments. Third, it requires much time and patience, on the sides of both the individual scientists and of the companies. This may be contrasted with the situation of the character in Nozick’s example who needed no intellectual strain on his part to throw the juice into the sea, spent at most a couple of dollars to buy the can, and surely lost almost no time in performing his deed – to be precise, he spent the time it took to go to the nearest grocery store to get the can, walk to the seashore, and spill it.

But this three-pronged objection does not work. After all, although Nozick was rather parsimonious in his description of his thought experiment, one could think of a case where throwing a can of tomato juice into the sea looks more like a Promethean undertaking than an idle and almost costless act. Regarding the ingenuity required to come up with such an idea, let’s imagine that the spiller is a landscape artist who has devised a way of dyeing the whole sea red for a few seconds with his very special radioactive tomato juice, and that, by recording and publicizing this act, he hopes to be rewarded for his brilliant idea. Let’s imagine, too, that it took years for the artist to come up with the definitive formula with which he can carry out the act, and also that he invested thousands trying different formulae before arriving at this one. Surely we would praise the artist and celebrate his work – we might even pay for a ticket to see it with our own eyes. But this would be a far cry from giving him property rights over the sea itself.

Let me take a real life example. In 1969, Christo and Jeanne-Claude finally managed to wrap up Little Bay in Sydney in fabric after planning it for years. It took 100 workers and 11 volunteers, who together spent 17,000 hours, to cover two and a half kilometers of coast and cliffs up to 26 meters high with 95,600 m2 of synthetic fabric and 56 km of rope. Despite all the labor-mixing and value-adding, however, the artists did not claim Little Bay as theirs just because it was wrapped under their fabric. Sensibly, they understood that their intervention in the landscape did not make them owners of the landscape. They also did not try patenting the wrapping method, to exclude other people from wrapping objects in a similar way unless they paid a fee to them.

The Sea Is One, GMOs Are Thousands!

A second defense for patenting GMOs might say that, while the ocean is one and not replicable, a GMO is only one variety among potentially countless other variants. Accordingly, while Nozick’s juice-throwing sea appropriator would violate Locke’s proviso of leaving “enough and as good” for others if he appropriated the entire ocean for himself, genetic companies leave more than enough and as good for others to use (depending on how we choose to interpret the proviso). In other words, while the former would come to own some individual thing which is exclusive and finite, and would therefore worsen the situation of everyone else, the biocompanies claim ownership over a type of thing, where there are thousands of other types left free for everyone else to use. 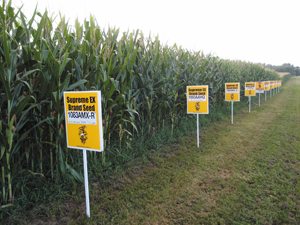 However, if this argument rests on the idea that the patenting of GMOs does not violate Locke’s proviso against making others worse-off through one’s acquisition, it is wrongheaded. After all, if you turn something that could be simultaneously enjoyed by many into something exclusive, you are making many people worse-off. Moreover, while there may seem to be a clear-cut conceptual difference between appropriating some thing (eg, the sea) and appropriating a specific type of thing (eg, a turnip variety), in practice the difference is not so clear cut, for at least two reasons. First, GM plants easily ‘contaminate’ others of the same species. This can in the long run lead to the homogenization of plant varieties, and so a loss of biodiversity. To make other plants exempt from such contamination might prove very difficult, if not impossible. It also might lead to the absurd scenario where those whose crops have been accidentally contaminated by a registered variety of a plant have to compensate the copyright owner for patent infringement (as has in fact happened in countries such as the US)! Second, if society decides to accept these rules of the game, and starts patenting life forms, this may lead to a competitive race where, with time, one will have to pay for the use of seeds that historically were part of the common patrimony of mankind. Those lacking the technology and tools – the knowledge and the means – to engage in GMO development would certainly end up disadvantaged in a way that would openly violate Locke’s proviso.

But The Social Utility!

Putting aside desert and the proviso not to make others worse-off through ownership of GMOs, a third way to defend intellectual property rights over GMOs along Lockean lines would be to appeal to the social utility produced by mixing one’s labor with nature. Thus, the defense would say, whereas throwing a can of tomato juice into the sea creates no social value (on the contrary, it is a wasteful act that could have fed a hungry child instead), the ‘creation’ of a new GMO brings improvement for humanity. The whole point of GMOs, it could be added, is that they possess properties that make them especially valuable for us. Take golden rice, which has a higher betacarotene content than unmodified rice, and thus helps prevent blindness or diseases such as measles in children; or consider Harvard’s oncomouse, a GM mouse widely used for medical research on human cancer.

But this argument fails too, since the social utility of throwing a can of tomato juice into the sea could be quite high. Imagine that Nozick’s character is again the brilliant artist, and he creates joy and awe among thousands of spectators by dyeing the sea in weird colors. Yet however revealing and transforming the experience he creates, we still wouldn’t think of granting him exclusive rights over the sea.

As none of the above defenses of intellectual property rights for GMOs work, I conclude that the burden of proof remains on those who favor the patenting of modified life forms; to look for some other moral grounds to justify doing so. One way to do this might be to appeal to the economic incentives needed for companies to develop GMOs in the first place. Without some assurance of financial reward, this argument would go, why bother? However, with intellectual property rights in place, we can be sure that we’ll obtain ever more improved plant and animal varieties. One obvious question here, however, is why the economic incentive has to rely on intellectual property rights and not on some other sort of mechanism, such as paying the companies directly to do the research, or compensating them according to the degree of social utility they produce. A further question is why the incentive has to be economic at all, and not based, for instance, on some sort of social or honorific reward. But answering these questions would be the topic of another article. My interest in this one has been to separate at least one variety of wheat from the chaff.

Alejandra Mancilla is a postdoctoral research fellow in the Centre for the Study of Mind in Nature (CMN), University of Oslo. Her current project investigates the normative grounds over claims for land and natural resources. She has a blog in Spanish, El ojo parcial, focused on the environment and politics.