It is always a pleasure to read a review by one established philosopher of another. In the Times Literary Supplement of 31 August 2012, Roger Scruton reviewed The Adventure of French Philosophy by Alain Badiou (b.1937). Badiou is one of those ‘New Left’ French intellectuals who came too late to be taken apart in Scruton’s Thinkers of the New Left in the 1980s, and so Scruton caught up with him then.

Scruton’s review of this ragbag of old essays and reviews is exemplary, and there is no need for me to repeat what it says. He draws attention to Badiou’s ‘unintelligible metaphysics’, his ‘mathematical jargon’, his ‘delirious syntax’, his ‘revolutionary politics’, and his ‘consciousness of his own greatness’. He obviously dislikes everything that Badiou stands for, and is severe, although polite, about it. However, I think there are three things that need to be said about Badiou that Scruton does not say.

The first is that it’s a mistake to be too polite. Badiou deserves derision. Instead of contempt, though, it might be better to offer something more bullish, indeed, John Bullish – a refutation of snails by roast beef. It may as well be said frankly, then: a lot of Badiou is rubbish. There is nothing to be done with it except laugh. Australian philosopher David Stove once said that it is greatly to the credit of the English language that the sort of enormities philosophers can put forward in Greek, German and French simply do not seem to be possible in English. (Philosophy written in English has its own problems, of course – boredom being the major one.) Badiou says that French philosophers in the Twentieth Century looked for something in German philosophy. We could say that, lacking an emperor themselves, they decided to steal imperial clothes from the Germans; but the German Emperor of Philosophy, Martin Heidegger, had no clothes. So they stole his lack of clothes instead, and now wear that lack proudly – and feel irritation if any rosbif laughs at them. 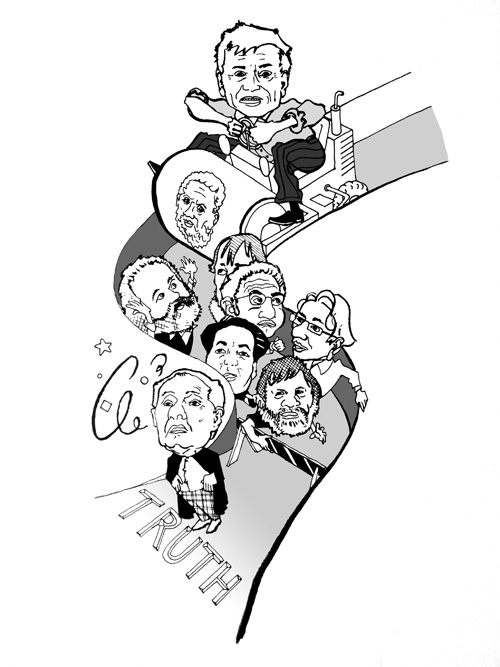 The second thing to say is that it has to be explained why anyone takes Badiou seriously. His books are probably read in the English (when they are read) because of the high status that radicals continue to have in modern letters. There is also the fact that we English speakers like our intellectuals to have foreign names. Of course, none of this can explain the popularity of Badiou in France, which popularity I think must have something to do with the long French intellectual tradition of centrality – the domination of Paris – and of certainty – the domination of ideas. It is unlikely anyone outside France could explain it further, and unlikely that anyone in France would want to explain it, in case it is seen for what it is. (In France, a spade is not a spade: nay, it is a tool for digging holes in institutions, and can be used only by someone licensed by an institution to use it.)

Badiou’s intellectual trick in The Adventure of French Philosophy is a shrewd one, for he plays a dialectical game with dialectics. By this I mean that he adopts the self-enclosed, developmental, dialectical method with which Hegel structured his philosophy; but then, in classic Young Hegelian manner, disavows it while retaining it. As he says, “The dialectic, the primacy of practice, means first and foremost affirming the historical objectivity of ruptures” (The Adventure of French Philosophy, trans. Bruno Bosteels, p.173). History is no longer a Hegelian cycle in which theses are opposed by antitheses generating syntheses, which in turn become new theses: here the cycle is broken. So Badiou has finally found a way of having his dialectic and eating it; and he continues to do so, to great acclaim. It is impossible to argue with anyone who is so equivocal, since if you argue from continuity in history, he will point to discontinuity, and if you argue from discontinuity, he will accuse you of transcendence. And transcendence is unacceptable, as Badiou tells us: “Resist the ineluctable temptation of transcendence; endure the proximity of chaos” (p.340). I wonder if Badiou’s students take notes? Surely not. Surely they just stand and cheer.

The third thing to say – and this may come as something of a surprise – is that there is something positive to be said for Badiou. Sure enough, Being and Event (2001) is deplorable, and Theory of the Subject (1982) worse. He is guilty of all the horrors of which Scruton accuses him. He should be silenced every time he mentions Lacan, and put in the stocks for his fatuous references to Mao. But there are one or two interesting books in his oeuvre, or, I should say, one or two books with interesting bits in them. I admired parts of The Manifesto for Philosophy (the first, not the second), which made a very bold and interesting claim about the status of philosophy; parts of The Century (2005), which offers the sort of arresting history of the Twentieth Century that only someone as odd as Badiou could write; and parts of Metapolitics (1998), which made certain sorts of modern leftist assumptions about politics clearer than Zizek, Rancière or anyone else is capable of making them. And there is, I think, another reason why Badiou should be defended. It is, in short, because Badiou is a Platonist. And I think this enables him, and us, to see something about radical thought which would not be so clear otherwise.

Badiou’s Platonism is of the first importance in understanding him, and in understanding why he is interesting. For almost everyone else on the left is Protagorean – that is, a relativist of some sort. Yet here is a philosopher who is willing to write at length (although usually not very clearly, it is true) about words like ‘truth’, ‘real’ and ‘universal’. Like Plato, he believes in things, and so he defends what he believes in with a lot less trickiness than relativists defend what they pretend they don’t really believe in. There is something to be said for this. He certainly believes in philosophy. In one book he attacked Wittgenstein for being ‘against’ philosophy. I have not read this book, but do not think it is a bad thing to have a blatant assertion of Platonism, instead of the weak, watery sort of assertion of it one finds in, say, Dummett’s wearisome books on Frege.

If this is right, then Badiou’s philosophy of mathemes, Mallarmé, and May 1968, is interesting because Badiou is determined not to abandon Plato. But my own view of this is that Badiou’s idiosyncratic Platonism is itself just the latest attempt to defend the indefensible.

Sometimes his Platonism spills over into outright Pythagoreanism. A Pythagorean is obsessed with numbers to the point of allowing his thought, and reality itself, to be structured by them. Jung was Pythagorean; and so was Hegel – both without admitting it. (So is my brother, who married on the 8th of August, 2008. So am I.) Badiou is a bit tricky about it: but we find, for instance, that he continually muses on the ‘One’, the ‘Two’ and the ‘Multiple’. What he says about them is incomprehensible, but it does give us something of the tenor of his mind.

Badiou on politics is amusing: pretending to be engaged, yet in fact refusing to engage with anything, except, of course, 1917, 1968, and the ‘eternal axiom’ of equality. This detachment means he can appeal to anyone who has doubts about liberalism. Badiou’s thought, like most radical thought, is interesting when it criticizes liberalism, and pure comedy otherwise.

It’s a commonplace of radical thought that liberals justify the established order of capital and democracy. The subtle version of this criticism of liberalism – as made by Perry Anderson, say, when writing about John Rawls – is that liberals justify this order by appealing to imaginary transcendental principles. So this criticism depends on saying that liberals arbitrarily relate two worlds, one of which does not exist and tells us nothing about our world, even though it is used to justify practices in this world. So far, so good. However, the radicals or socialists who make this criticism have an even more intractable difficulty with their own proposals. For, if there is only one world, and no world of transcendental moral principles, why should we do anything other than defend the established order? Where does the justification for revolution come from?

Badiou cannot say, since he denies that the justification for revolution is transcendent (even his Plato is immanentist – the eternal truths are in the world, not outside it). But Badiou also denies that the justification for revolution can be known because it is immanent. All he can say is that revolution is the ‘coming-from-nowhere’; the possibility of a ‘rupture’; of a ‘singularity’. I think this sort of thought, silly as it is, will have a continued shelf-life just because it is attached to an effective criticism of liberalism and seems to offer an alternative to it (however fatuous it actually is). As long as liberalism justifies the status quo, people will continue to ask what the alternative to liberalism is; and Badiou, along with Negri, Harvey and the rest, will continue to bake cakes in the dialectic oven for us to have, or eat, or both.

In The Adventure of French Philosophy, Badiou tells us what he admires in any other philosopher: “the desire for philosophy, the restored taste for the system, the central tenets of the Lacanian challenge, the theory of the unnameable real, the obligatory of Platonism, even the apology of the revolt” (p.308). Should these admirable philosophical qualities be taken seriously? To the first of the items, the desire for philosophy, yes; to the second, I would say even louder, yes; to the third, absolutely not; to the fourth, no, because it doesn’t mean anything (even Buddhists and Christians named it); to the fifth, yes, with all the necessary qualifications; and to the last, no, or only if we define ‘revolution’ as a sort of theoretical game played with glass beads by players who live on the magic mountain called the Ecole Normale Superieure.

To Be Born: Genesis of a New Human Being by Luce Irigaray

Is An Ageing Population Our Natural Fate?