In Defense of Humorous Nihilism

John Marmysz looks on the funny side of absolute nothingness.

God is dead. Nothing matters. All is meaningless. Nothing is true. These are the sorts of laments often associated with nihilism, a philosophical perspective premised on the belief that the world is incurably imperfect, flawed, defective. According to the nihilist, the way that the world actually exists is not the way it ought to be. We hope for Truth, but we never seem to grasp it in its entirety. We desire Beauty, but find only blemished examples of it in the concrete world. We want things to have value, but nothing seems ultimately all that important. We want the world to be perfect, but it always disappoints us with its flawed nature. This might not be so bad if only the nihilist had faith in our potential to somehow improve things. However, nihilists reject this sort of optimism, instead claiming that it is beyond humanity to mend the eternal rift between our real state of existence and the way we ideally desire things to be. For the nihilist, the real and the ideal are in everlasting conflict with one another, and there is nothing that can be done to alter this condition.

In her book The Ethics of Ambiguity (1947), the existentialist Simone de Beauvoir characterizes nihilists as frustrated idealists, condemning them as exemplars of ‘bad faith’. That is, instead of grabbing hold of their imperfect situation like good existentialists, she claims nihilists resign themselves to a sort of impotent fatalism in which all worldly undertakings are doomed to failure since they must inevitably fall short of perfection. If perfection is the criterion of success, then nothing that we accomplish in the real world could ever measure up. The greatest of human achievements are still disappointments, and all worldly activity amounts to a vain struggle toward impossible goals.

This seemingly bleak and depressing philosophy of life has been wrestled with by many of the world’s greatest thinkers, most of whom, like Beauvoir, have endeavored to reject it, and move beyond it. Thus we find philosophers such as the Buddha, Immanuel Kant, Max Stirner, Søren Kierkegaard, Arthur Schopenhauer, Martin Heidegger, and perhaps most explicitly, Friedrich Nietzsche, struggling with the problem of nihilism, proposing their own ‘solutions’, and suggesting ways that might guide us on a path toward the overcoming of our despair.

Despite the efforts of these great intellects, by some accounts nihilism is a more urgent philosophical syndrome today than it ever has been. It certainly continues to be a challenge not to be taken lightly, and certainly not something most people feel inclined to laugh at. And yet this is precisely what I propose here. In what follows I shall argue that the most appropriate response to nihilism consists not in despair, but in the adoption of a humorous attitude – one that allows us to laugh into the void of nothingness that separates us from our highest ideals.

Traditionally, philosophers have recoiled from incongruity, seeing in it something illogical, irrational. As such, incongruities have normally been thought of begging for resolution, eradication, or at the very least, some sort of clarification.

We find this attitude articulated at the beginnings of Western philosophy, with Socrates’ development of his dialectical method of inquiry. In Plato’s Apology, for instance, where Socrates grills Meletus concerning the charges brought against him, Meletus claims both that Socrates is an atheist and that he teaches about gods not sanctioned by the state. Surely, Socrates insists, there is an inconsistency here, for one cannot both deny the existence of gods and teach their existence.

Socrates’ strategy of rooting out, exposing and/or dissolving logical incongruities was eventually taken up and intensified by thinkers such as G.W.F. Hegel (1770-1831), who endeavored to demonstrate that nothing that exists can possibly be incongruous with anything else that exists. While certainly there are worldly phenomena that appear to clash with one another (such as masters and slaves), Hegel argues that in the end these incongruities work themselves out in a final historical synthesis comprehensible by minds clever enough to understand the underlying logic of the universe. All things, even those that appear to contradict one another, are really expressions of an underlying, unitary ‘absolute idea’ that can potentially be grasped by the human intellect. Worldly incongruities, in this Hegelian sense, are misconceptions masking a hidden, fully consistent universal Truth. For Hegel, ‘the real is the rational’.

The common strategy pursued by philosophers following in the footsteps of Socrates and Hegel has been to use the tools of logic to attempt to dissolve incongruities. This helps to explain why it is that many of the greatest intellects in the history of the world, when they have encountered nihilism, have labored to ‘solve’ it, and proudly trumpet their successes at ‘overcoming’ this troubling conundrum. As mentioned, nihilism consists of a specific kind of incongruity: it is an understanding that the real world can never be brought into harmony with superlative ideals. I call this dissonance between the ideal and the real ‘nihilistic incongruity’. As with most forms of incongruity, philosophers have traditionally been uncomfortable with nihilistic incongruity, seeing it as calling for either despair or for resolution, and nothing in between. But this is a false dilemma.

One of the oldest theories of humor holds that incongruity is also the root cause of laughter. According to this view – traces of which can be detected as far back as Aristotle – we tend to find things funny when they involve incongruous yet unthreatening clashes between ideas, perceptions, or other phenomena. When such perceived incongruities are encountered as harmless, we consequently experience no urgency to resolve them or to seek solutions to their absurdities; rather, we tend to linger in their presence, drawing amused pleasure from their ongoing contemplation. The contemporary humor theorist John Moreall links this capacity to the refinement of reason in humans, suggesting that the pleasure we gain from the contemplation of incongruities encourages us to fine tune and hone our logical faculties, in turn providing us with an evolutionary advantage.

Whatever the evolutionary source of the development of our capacity for humor, it is undeniable that the incongruity theory works quite well in helping to describe the structural mechanisms involved in many, if not all, jokes. Take for instance this cartoon, which for those of us interested in nihilism is quite a fine example of wittiness: 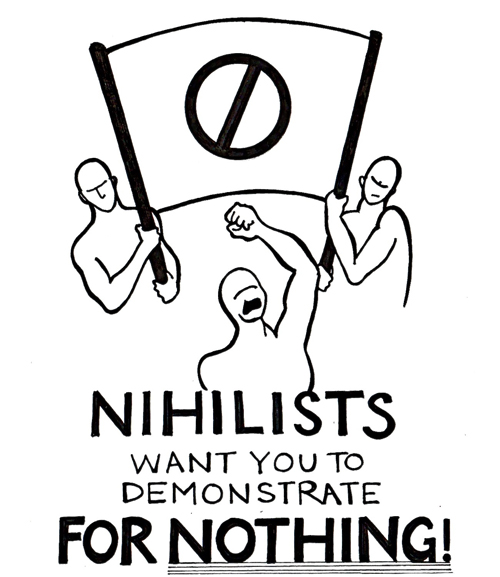 Here, the humor arises from an incongruity between two concepts: the idea of assembling passionately and publicly for some cause, and the nihilistic idea that nothing is really true, real, or valuable, and thus worth demonstrating for in the first place. The joke plays upon a double meaning in the word ‘nothing.’ In one sense, ‘nothing’ means ‘nothing at all.’ If taken in this way, we could disambiguate the joke to mean that nihilists want you to demonstrate for nothing at all; in other words, they don’t want you to demonstrate. However, there is also the sense of ‘nothing’ as a particular kind of purpose – the content of a particular, nihilistic belief system. In this sense, the joke could be disambiguated to mean that nihilists want you to demonstrate on behalf of the cause of nothingness.

Notice that when we resolve the incongruity between these two possible meanings of ‘nothing’, the joke ceases to be funny. There is nothing humorous in saying “Nihilists don’t want you to demonstrate for anything.” Likewise, there is nothing humorous in saying “Nihilists want you to demonstrate for the cause of nothingness.” Our amusement requires that the ambiguity between two meanings of ‘nothing’ remains unresolved. Clarifying and dissolving the incongruity that such a joke contains causes the evaporation of the humor, replacing it with a more rational sort of puzzle-solving satisfaction. But in solving the puzzle of how the joke works, its comedic effect disappears. Laughing at the joke with an amused state of mind requires that we linger in our amusement, holding the two incongruous ideas in our minds at once. In this no puzzle is solved. The word play is its own reward.

If the world does contain truly unresolvable incongruities, it would be futile to attempt to carry out their logical reconciliation. Hegel was an optimist in thinking that true reality, when seen clearly, is incongruity free; but for nihilists the conflict between the real and the ideal is ongoing, unresolvable, and inescapable. As such, they must give up hope for any final resolution to their separation from perfection; hence the opening laments, ‘God is dead. Nothing matters. All is meaningless. Nothing is true.’

It is precisely because of the nihilist’s logically-irreconcilable incongruity between aspirations and the actual state of the world that many philosophers who have encountered it have either fallen into despair or chosen to ‘overcome’ nihilism by changing their fundamental beliefs about reality. But there is a third option, and that is to adopt an attitude of humorous amusement toward the world’s absurd nature. If the human condition is viewed as a joke – something ludicrous, and necessarily marred by imperfection – then it makes sense to stop trying to treat it like a puzzle with some sort of clever solution. Perhaps it would instead be more appropriate simply to linger in the presence of that incongruous gap between the way the world actually is and the way we wish it to be, staring into the abyss with fearless amusement. In so doing, nihilists might extract pleasure from a situation that would otherwise only bring frustration and pain.

John Marmysz teaches philosophy at the College of Marin. He is the author of Laughing at Nothing: Humor as a Response to Nihilism (SUNY Press, 2003), The Path of Philosophy: Truth, Wonder and Distress (Wadsworth Publishing, 2011), and The Nihilist: A Philosophical Novel (No Frills Buffalo, 2015).