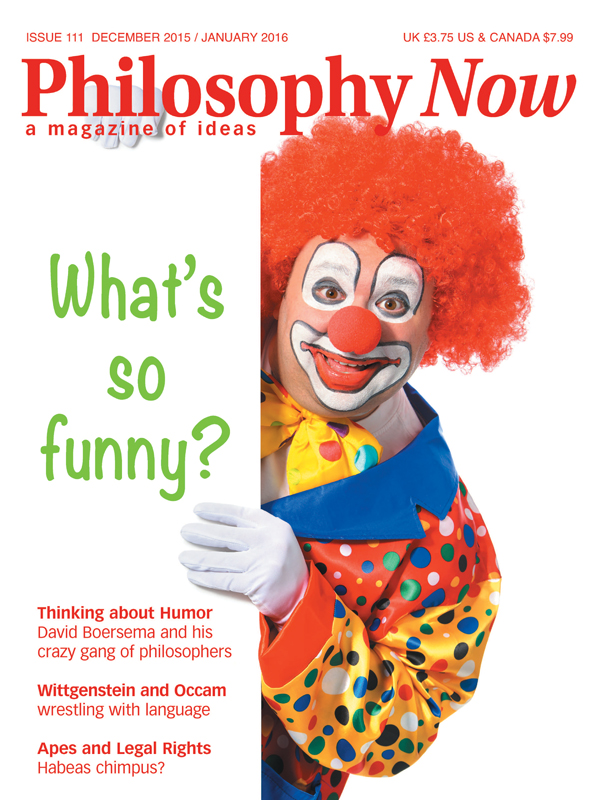 Anja Steinbauer on who can make fun of what, when and how.

The Nature of Laughing at Ourselves

Mordechai Gordon takes ideas about not taking ourselves too seriously seriously.

The Philosophy of a Controversial Joke

Isadora Mosch considers why we laugh at things that aren’t funny.

In Defense of Humorous Nihilism

John Marmysz looks on the funny side of absolute nothingness.

The Free Will of Ebenezer Scrooge

Al Qaeda and ISIS: From Revolution to Apocalypse

When Apes Have Their Day In Court

Shawn Thompson follows legal efforts in the U.S. and Argentina to win rights for apes, exploring arguments about morality and autonomy along the way.

Christian Erbacher and Lu Jiang imagine a meeting between a modern and a medieval philosopher.

Peter Cave barely avoids being crushed into a singularity. Phew!

Alistair MacFarlane thinks through the life of a godfather of logic.

The following answers to this categorical question each win a random book.

Peter Adamson thinks about the women in the history of philosophy.

Reality & Stability: From Parmenides to Einstein

States of Shock by Bernard Stiegler

The Philosopher, The Priest, & The Painter by Steve Nadler

Bradley Roote asks: what does baseball have to do with philosophy?