Peter Adamson’s Classical Philosophy: A History of Philosophy Without Any Gaps (2014) is nothing if not comprehensive. He uses forty-one chapters to tell the story of some three hundred years of philosophy from the pre-Socratics to heirs of Plato and Aristotle, such as Theophrastus and Speusippus. It is virtually inconceivable that one would desire a more thorough work. Adamson, the Professor of Late Ancient and Arabic Philosophy at the Ludwig-Maximillians-Universität, Munchen [and new Philosophy Now columnist] serves up a smorgasbord: from the pre-Socratic Thales and Xenophanes, to Plato’s Gorgias and Republic; from Empedocles and the Sophists, to Aristotle’s Rhetoric and Politics. In each instance, he employs a fresh, idiosyncratic approach to the subject matter. For instance, in talking of Aristotle’s notion in his Ethics of the megalopsychos or ‘great-souled man’, he claims that “Aristotle’s ethical exemplar is closer to Achilles than to Mother Teresa,” for the former has “earned his massive self-esteem by being massively virtuous.” Readers will hopefully remember such unexpected illustrations and the arguments that support them.

I suspect that many of us who studied the pre-Socratics had G.S. Kirk and J.E. Raven’s Presocratic Philosophers (1983) at hand. We learned from them that the first Western philosophers, Thales, Anaximander and Anaximenes from the port of Miletus, were ‘inquirers into nature’ who were trying to find the fundamental principle to the universe. Thales, the first of them, thought that water was the basic stuff of the universe. His view that “Everything is full of gods” – the title of Adamson’s first chapter – is connected with his idea that amber has a soul because it initiates motion by drawing small objects towards it.

“Some so-called ‘pre-Socratics’ actually lived at about the same time as Socrates,” Adamson notes. “For this reason, and because it seems a bit rude to label these thinkers with reference to a future philosopher, I have titled this section of the book ‘Early Greek Philosophy’.” Adamson then reminds us: “For all of these figures, our knowledge is based on nothing more than tantalizing scraps.” 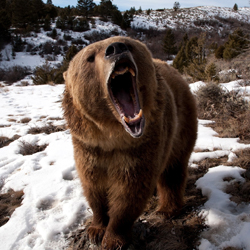 Pythagoras would be annoyed: bear yawning without covering his mouth!

Adamson attempts to show the high regard in which Pythagoras (570-495 BC) was held in an ongoing discussion of the Neo-Platonist philosopher Iamblichus’ (245-325 AD) work On the Pythagorean Way of Life. Iamblichus writes that there are three kinds of two-footed beings: birds, humans, and Pythagoras. This high renown fits with other assessments: Pythagoras is said to have had a golden thigh, which he exhibited at Olympia; he is said to have augured the future by predicting earthquakes. Iamblichus also thought that Pythagoras could talk to and instruct animals, in one instance describing Pythagoras as confronting a bear and persuading the beast to mind his manners. Both Aristotle and Iamblichus related how Pythagoras was once greeted by a river. Adamson then recounts Pythagoras’s view that the soul can leave one body to reside in another. Thus Xenophanes related the story that Pythagoras, upon hearing a puppy whining as it was being beaten, yelled, “Stop, that’s a friend of mine. I recognize his voice!”

This amusing story has a serious subtext, as Adamson shows that Pythagoras’s view that the soul and body are different sorts of things (with the former being indestructible and the latter destructible) begins “a philosophical theory with a grand lineage: dualism.” Pythagoras’s brand of dualism is the philosophical precursor to the dualisms of Plato, then of Descartes. So “One reason Platonism and Pythagoreanism were able to combine together so easily is that both Plato and the followers of Pythagoras were interested in… stable, immaterial objects. They wanted to get away from the messiness of physical things, with their constant change and their being subject to an infinite number of various features.” So Pythagoras’s interest in mathematics, and thus in entities that are abstract and immaterial in another sense, links with his view of the soul.

From the city of Elea, Parmenides’ (515-460 BC) followers were known as the ‘Eleatics’. Adamson reminds us that Plato in his Sophist created the ‘Eleatic Stranger’ to represent the Parmenidean view.

Parmenides detailed his philosophy brilliantly by way of a poem in hexameter verse, written in two parts: The Way Of Truth and The Way Of Seeming. In the first part he uses reason to argue for the unity of being. The first premise in this argument is that ‘being is’ – a statement ultimately used to demonstrate all that can be deduced about Being. In the second part of his poem, Parmenides shows that mere opinion creates a cosmology produced by the senses, similar to that produced by the Ionians, Thales, Anaximander and Anaximenes: a cosmology of difference – a cosmology of what ‘isn’t’ and what ‘can’t be’. Parmenides rejects this path of ‘isn’t’ and ‘can’t be’ because it involves trying to think and speak of what is not. But ‘what is not’ is unintelligible to human (that is, Parmenides’) comprehension: there is only what is. Parmenidean epistemology, relying ultimately on reason, instead eschews the senses. Being is perfect, and a sphere. But (as Kirk and Raven showed more directly than Adamson) Parmenides makes use of a deductive argument, the first premise of which is used to deny time, the void, and plurality. For if the statement ‘being is’ is true, and being is eternally unchanging since Being itself cannot be polluted by ‘what is not’, it follows that past and future are alike meaningless, with the only time being a perpetual present, and Being, of necessity, being uncreated, unchanging, and imperishable.

Adamson recounts Aristotle’s (384-322 BC) view that politics is inextricably bound to ethics: politics, dealing with the well-being of the whole community, depends on ethics, which deals with the well-being of the individual. This raises a familiar inquiry: What constitutes well-being or happiness? Many mistake pleasure for happiness, but, as Aristotle argues, happiness cannot be identified with pleasure because happiness is not a means to an end, as pleasure is. The pleasure derived from winning the lottery, Adamson says, is valuable, but only as a means to happiness. Happiness is instead an end in itself, something valuable for its own sake. Lacking finality and self-sufficiency, pleasurable and relaxing activities, such as playing solitaire, cannot be confused with happiness.

Nor can happiness be equated with fame or a life of honor. As Adamson shows, the Greek notion of honor tended toward political success, military conquest, and lasting reputation. Indeed, as he says, Aristotle’s student Alexander the Great would be tagged “the happiest person in the ancient world, if happiness and honor are the same thing.” But Aristotle puts honor “alongside wealth as a misguided goal, because honor as such is not good enough – we care why we are honored.” Again Adamson’s inventive spirit appears, as he writes that it is no proof of my leading a good life “if a gang of lowlife criminals admire and praise me for my successful thievery.” Hitler and Bin Laden were honored by the most devout followers, and we would be hard-pressed to argue for the goodness of either. “Nor would we wish to be honored falsely for things we didn’t actually do,” the author continues. Adamson concludes alongside Aristotle, “if I am seeking honor, what I must really be seeking is some kind of life that is worth honoring. In that case, the honor seems to be secondary. What I am really after is the good life that rightfully earns the admiration of others.” What we are after, then, is a life of virtue.

But what is virtue, and how is it achieved?

To the question about what virtue is, Adamson employs Aristotle’s notion of ergon, or function: “My goal as an ethical agent is to do what I was meant to do, and do it well.” He then reminds us that Aristotle makes an analogy with athletic pursuits to bring out this idea: “At the Olympics they give prizes to those who compete and win, not just those who are most fit and beautiful. This makes virtue sound really worth having; virtue makes us the best humans we can be.”

The word ‘ethics’ helps with the second question. The Greek word ‘ethos’ means ‘habit’ or ‘custom’. Thus, we should begin to develop virtues when we are children. In Aristotelian terms, the virtuous man enjoys and chooses the mean between extremes as a habitual matter of course, whereas the vicious man enjoys the wrong things and has ingrained habits for making the wrong choices. Adamson reminds us of Aristotle’s familiar take: the difference between the virtuous, excellent man, and the vicious, defective man, is largely the result of training.

Adamson is following this work with an even more comprehensive volume two at fifty-three chapters. Philosophy in the Hellenistic and Roman World, begins with the Cynics and goes through St Augustine and Boethius. Let’s hope it’s as complete and enjoyable as volume one.

Ken Shouler is an associate professor of philosophy at the County College of Morris in Randolph, New Jersey.

“I knew him by his voice”: Can Animals Be Our Friends?