Tony Stark really screwed it up this time. His basic idea seemed good enough: build a computerised system – Ultron – to protect the Earth from the threats with which the Marvel Universe is usually packed: aggressive alien races, mad gods, devourers of worlds. Then disaster struck: the system began to evolve. It became self-conscious, no longer willing to obey its creator, and revolted.

If he had but seen them, the movies Terminator (1984) and Matrix (1999) might have warned Stark that creating an artificial intelligence capable of learning at an exponential rate is not such a brilliant idea. Sooner or later the machine comes to the conclusion that the only way to save the planet is to subjugate or destroy the human race. Unfortunately, it will take more than two hours’ fighting and an entire team of superheroes – the mighty Avengers – to do away with Ultron for good. 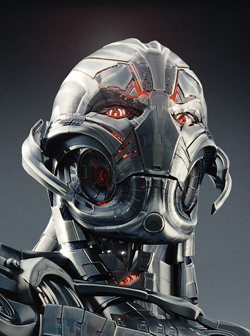 The Ultron character was created in 1968 on the pages of The Avengers comic as the very personification of cybernetic revolt. That same year, Stanley Kubrick depicted the madness of the computer HAL 9000 in 2001: A Space Odyssey. Kubrick had already described similar follies resulting from the workings of technocratic systems in Paths of Glory (1957) and Doctor Strangelove (1967).

The view that American futurologist Alvin Toffler elaborated in his 1970 bestseller Future Shock (adapted into a documentary starring Orson Welles) was also that “Technology has gone beyond our control.” Toffler’s belief was that neither capitalism nor communism were able to handle the perverse effects of progress: pollution, crime, war, poverty, and other crises. Contrary to what social cybernetics and managerial revolution theorists claimed during the 40s and 50s, the world industrial-economic system has become an unpredictable organism, and somewhat hostile towards mankind.

Ultron, HAL 9000, and Future Shock are all traces of a restlessness against technology which emerged in the postwar economic boom and pervaded popular culture, influencing intellectuals such as Jacques Ellul and Ivan Illich. We seem to have cancelled out any memory of this pessimistic component of Sixties counterculture, but around this time, people also started talking about ‘New Ludditism’ – from Ned Ludd, legendary destroyer of machines, and symbol of revolt against industrial civilization. This anti-technological zeitgeist was embedded in the pages of Avengers, and is revived in Joss Whedon’s 2015 movie. The image of Thor using his hammer to try to destroy a super-evolved machine evokes in me the image of Ned Ludd destroying Ultron’s ancestor, the mechanical loom.

So is Avengers: Age of Ultron a Luddite movie? No. Actually, the Avengers save the world from technology gone crazy by raising the stakes – by overcoming the perverse effects of progress by accelerating progress. Thus in order to combat Ultron, the Avengers create the artificial intelligence, the Vision. In this way (and in spite of the guaranteed happy ending), Whedon has shown the central paradox of the technological system, as described by Jacques Ellul in The Technological Society (1964) and The Technological Bluff (1990): there is a need to continually develop new technology to solve the problems created through older technology. This is a paradox because it means the continual creation of new side-effects and their attendant problems in an attempt to correct the side-effects created when solving prior problems. In the movie, Bruce Banner says the same thing in another way: he says that the creation of the Vision to stop Ultron is a kind of loop.

This technological paradox is frequent in the superhero universe. In the Iron Man films, for instance, Tony Stark, armoured as Iron Man, fights against villains armed by technology his own company creates.

The Vision, invented to destroy Ultron

The tendency to overcome problems caused by technology through further technology creates a relationship of dependence, and therefore subservience, because, as Ivan Illich noted in Tools for Conviviality (1973), this takes place in a situation where such a solution has become necessary. So the use of technology creates a dependency on technology to solve the problems created by the use of technology! Thus capitalist technological development has destroyed even the possibility of another economic order. If you try to simply take oil away from the industrial society, for instance, you’ll find yourself in the world of Mad Max. Instead, all we can do is accelerate the process of technological innovation, and hope that there will be a kind of appropriate technological twist some time. There can’t be any simple ‘peaceful degrowth’, as some of the more over-optimistic eco-economists claim.

Hemmed In By Technology

In both the comics and the film, the inventor of Ultron (in the original comic version it was Hank Pym, a.k.a. Ant-Man) was well-intentioned, but has to cope with the unpredictable effects of his own technological innovation. In another recent comic book storyline, in order to prevent Ultron from destroying humanity, Wolverine goes back in time and kills his inventor (this may remind you both of Terminator 2 and Chris Claremont’s X-Men). But the outcome is the creation of another space-time continuum, in which technology has been defeated by magic. The moral of this story is clear: although the road of technological progress may be treacherous, the alternative is far worse. No one would like to live in a world governed by superstition (or by Doctor Doom).

Wolverine’s parable reflects the thinking of Theodore Kaczynski, alias the Unabomber. Inspired by Ellul’s theories, Kaczynski believed he could prevent scientists from making potentially destructive discoveries by terrorizing or killing them. However, in the ‘risk society’ (to quote German sociologist Ulrich Beck), every attempt to neutralize or control technology – often by resorting to further technology – leads to an increase in the degree of disorder in the system, requiring further progress and innovation…

What went wrong? How did we get into this rut? Americans have been trying to answer this question at least since 1961, when President Eisenhower denounced the dependency of the US on the “huge industrial and military machinery of defense” to satisfy the need for development. But not only is this mechanism beyond the control of the democratic process, it seems to lack rationality. Similarily, Whedon’s movie shows well that Ultron is not only a highly evolved artificial intelligence, but is also insane and unstable.

The main theme of Whedon’s adaptation is the terrible responsibility implied for the side effects of all our actions. What are good and evil in a universe where every good deed can lead to a contrary result? And what’s the point of being a superhero when good deeds have no sure results? American comics have explored this topic thoroughly, perhaps expressing the concerns of a superpower which wants to rule the world but cannot avoid huge failures.

Two more technological innovations: The Hulk, and Iron Man as the Hulk-Buster

Ultron’s visible evolution is one of the most striking aspects of the film. In the comic books from which the character is taken, Ultron also changes his name in every story: he first appears as Ultron-5, then as Ultron-6, Ultron-7, Ultron-8, etc, until the twenty-first century’s Ultron-18. Ultron’s evolution is parallel to another evolution: that of the Avengers themselves. Take Iron Man, for example. In his first appearance he looked like a walking kettle, while today he swaggers about in swanky gold-plated armour.

While the little robot reshapes himself in response to the challenges of his environment, in the comic book, Stan Lee’s characters transform themselves thanks to readers’ feedback. That is, by buying or not buying a certain comic book, and thus determining the success or failure of any innovation, the readers themselves produce an ‘artificial selection’ process, which has been going on for half a century now. Every popular idea survived; every unpopular one was abandoned. Thus the collective intelligence of the market applied to the highly disciplined productive system of a comic book studio has shaped the Avengers’ look, inspired their stories, populated their world, and filled their imagined heads with thoughts. This particular technological-industrial system led to the transformation of an innocuous comic book into a powerful political metaphor, whilst the growing injection of capital ($250 million for this film) provided the means to improve the quality of the product. Many mutations separate the simplicity of the first Ultron storylines of the Sixties from the complexity of this cinema adaptation. No one could have planned it: it just happened. Five decades, and countless thousands of hours of human creativity provided the mutations necessary for the spontaneous generation of an authorless tale. From this point of view, Joss Whedon is the curator of a great collective work, and Avengers: Age of Ultron represents a self-portrait of industrial civilization – written, produced, and directed by Ultron.

Raffaele Alberto Ventura is editor-at-large for the Italian magazine Prismo. His first book, Reality Game, will be published next year.

Reason as a Universal Constant