Raymond Keogh has a science-based take on personal identity.

Is it possible to bring science into philosophy? There is one outstanding example in which the answer is without doubt yes. It relates to notions of personal identity.

When philosophers grapple with the issue of what constitutes personal identity that endures through time they generally rely on description rather than definition. In fact, the humanities have failed to define ‘identity’ concisely. The Oxford English Dictionary defines ‘identity’ to mean: “The sameness of a person or thing at all times or in all circumstances; the condition or fact that a person or thing is itself and not something else.” Unfortunately, philosophy has been dogged by its inability to explain what can be meant by ‘sameness’ for something that changes. As a result, it has not been possible to apply the dictionary definition.

One of the problems with the concept of identity can be traced to the age-old question about the conditions under which something persists as the same object through time. But this idea contains the key to understanding how science can contribute to solving the dilemma. The paradox is succinctly illustrated in the famous Ship of Theseus thought experiment.

Greek hero Theseus sails home to Athens and his ship is put on permanent public display. However, the timber eventually begins to rot and over the years carpenters replace planks one by one. At what point does the ship cease to be the original ship? Finally all the old parts of the original ship have been replaced by new parts. If every plank, rib, and panel, along with the nails that held them together, has now been replaced, how can it be the same ship? Surely it is only a replica?

We know that the constituent cells of our bodies are similarly continually dying and being replaced. We change in many other ways too; what makes us the same person as we move through time? In the absence of an adequate or persuasive answer, many philosophers have denied that we have an unchanging essence that makes us who we are.

Because of this inability to define ‘identity’ in philosophy, the concept has become something of a hydra (to borrow from Greek legend again!). In their article ‘Beyond “Identity”’ in Theory and Society Vol. 29 (2000), Professor of Sociology Rogers Brubaker and historian Frederick Cooper acknowledge that the word can be understood in many ways and in many different forms, depending on “the context of its use and the theoretical tradition from which the use in question derives.” Furthermore, these usages “are not simply heterogeneous; they point in sharply differing directions.” We’re talking chaos and confusion here. 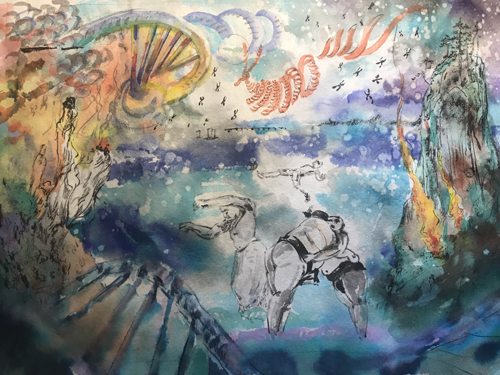 Until recently science was not well placed to make a positive contribution to the debate. But in April 2003 the Human Genome Project for the first time gave us the ability to read humanity’s complete genetic blueprint.

Every individual has a unique genetic makeup, their own distinct form of the human genome. (Although there is some debate on the issue, it’s possible that even identical twins do not have exactly the same DNA.) Furthermore, our basic DNA sequences remain unchanged throughout all stages of our growth, development, and degeneration. The individual’s DNA sequences are stable despite the replacement of chemical elements. They persist irrespective of damage to DNA due to random accidents. The sequences do not depend on cognitive abilities or consciousness. The Alzheimer’s sufferer who has lost most of her memory has the same genetic base as she had as an infant without self-awareness, or as an adult during the peak of a successful career. Our DNA remains the same from the first instant of an individual’s existence to his or her last breath.

In simple terms, our DNA sequences are unique, measurable, and constitute an objective description or plan of an individual’s deep-seated physical makeup. As such, personal identity as defined by the dictionary – ‘the sameness of the person at all times or in all circumstances; the condition or fact that the person is itself and not something else’ – is fully revealed through our DNA patterns: we can now say how and why we are one and the same being throughout our entire lives. By using DNA, it is no longer problematic to ground persistence of personal identity in the continuous existence of our changing bodies, and the difficulty in verifying whether one body at one time is the same body at another time is overcome by looking at the genome. The permanence of the abiding substance, the underlying genomic pattern, can be empirically verified even as all else changes over time. So through our understanding of human DNA it’s possible to transfer our ideas of personal identity from subjective notions based on descriptions in the humanities, to an objective concept based on science. Doing so is a major paradigm shift.

Such a shift would mean for a start that personal identity is the product of sexual reproduction that generates new and unique DNA sequences. In other words, the identity of the individual emerges from a male and female who have in turn originated from the organic substratum of the human species.

In biological terms, a species is generally defined as a group of organisms capable of successfully exchanging genes, or in other words, capable of interbreeding to produce fertile offspring. Ability to reproduce with our own kind is, therefore, the essential constant that distinguishes us as human. This means that communal identity becomes manifest through the ‘trinitarian’ act of reproduction, in which two personal identities of the opposite sex give rise to a new personal identity. As such, human reproduction defines the identity of the group. So DNA operating through human reproduction is at one and the same time the factor that defines our personal identity and gives rise to our communal identity. It is the organic link between both: the common bond without which neither exists.

So we now have a succinct, measurable, and objective way to define personal identity and communal identity, or both together. Furthermore, the definitions apply across all disciplines.

If ‘identity’ is confined rigorously to its objective definitions, it unburdens philosophy and the social sciences of the need to, somehow identify it out of an understanding of cognitive processes such as continued memory, sense of being, and/or human behaviour. The implications are overwhelmingly positive.

Indeed, the consequences of our ability to define identity in objective terms are enormous. Our genes don’t correlate well with our commonly used tools of human classification, such as race, ethnicity, culture or nation. Indeed, the disassociation between our basic underlying genetic structures and our superficial (and often incorrect) understanding of human differences, questions the entire bag of instruments we use to classify humanity. The ‘sameness’ that defines the human species – our ability to interbreed – is and was identical across every classification of people that can be devised; and every subset of humanity is permeable to the ‘other’ through interbreeding. Therefore unity within the human family based on our ability to intermix resists the notion of fundamental divisions.

If our systems of classification are suspect, then it’s imperative to modify them in favour of classifying humanity through the one aspect that provides the most fundamental understanding of who we are: namely, our DNA. Human genetics is the new classifier, and group differences are one of grade rather than essence. Although sometimes helpful in the study of human behaviour, they do not serve to constitute separate ‘identities’.

In ‘Beyond “Identity”’, Brubaker and Cooper are not persuaded that the word ‘identity’ is indispensable in its current usage. They think it is overused anyway, remarking that “The ‘identity’ crisis – a crisis of overproduction and consequent devaluation of meaning – shows no signs of abating.” So they favour replacing the term ‘identity’ by unbundling “the thick tangle of meanings that have accumulated around the term… and to parcel out the work to a number of less congested terms.” ‘Identity’ is to be relegated to the trash can at the precise moment that science comes to its rescue and gives it back its meaning!

Scholars are now faced with the challenge of either maintaining an unworkable approach to identity, or else decoupling the term from anything that does not relate to its scientific definitions at the personal and communal levels.

The main obstacle to the acceptance of this scenario may be reluctance on the part of the academic world to undertake a major shift in direction. But a collective attitude of this sort would be preposterous. In the interest of enhancing human knowledge, the academic world must continually and critically review its methods and approaches. But perhaps there is a feeling that the whole process has gone too far to execute the radical reforms in thinking that are required to solve the human identity crisis.

Raymond M. Keogh, director of Our Own Identity, is a retired scientist who specialised in tropical hardwood silviculture for over thirty years. He recently completed a book on the new definition of identity.

Reality & Stability: From Parmenides to Einstein

From Here to There: A Phi-Fi Investigation

The Beginning of Infinity by David Deutsch

You and Your Mind