Can The Multiverse Give You An Afterlife?

Rui Vieira says yes it can, of sorts.

The idea of an afterlife is central to many of the world’s religions, and understandably so, since the thought that eternal oblivion might await us after death can be terrifying. But to many skeptics the notion of an afterlife as put forth by most religions seems implausible, leaving eternal oblivion as the only possibility. However, they need not be so pessimistic. Maybe science itself could provide us with a coherent, even plausible, account of a kind of cosmological afterlife, especially if we throw some philosophy of mind into the mix.

How might science help assuage our fear of death? Modern physics has provided us with theories which claim that we may be living in a multiverse, in which our universe is only one among a potentially infinite number of universes. A mind-bending consequence of this is that there would be universes similar or even physically identical to ours containing duplicates of you and me. As some have wondered, if there are copies of you and me in these other universes, could we not view their continued existence as an afterlife of sorts, once our current life in this universe has ceased?

But would such a copy of me be me? Perhaps; but the idea can be made more plausible if it’s combined with a particular philosophy of mind and of the corresponding self in which neither is reducible to matter. So before addressing the cosmology, we must first address the problem of consciousness as it relates to matter.

The Mind & The Brain

In the philosophy of mind, materialism (or physicalism) is the view that there exists nothing except the material (or the physical). Physics has been enormously successful in reducing many natural phenomena to ultimately nothing more than the behaviour of atoms and subatomic particles. However, the subjective or experiential nature of consciousness continues to be a thorn in the side of any materially reductive explanations of the world. How is it that, in a universe of mostly dead matter, certain clumps of matter, especially humans, are conscious, have minds? That is, we have thoughts, sensations, feelings, desires, beliefs, intentions and self-awareness. How do these subjective experiences arise from matter; and more specifically, from the matter of the brain? This question is called ‘the mind-body problem’.

Many materialist philosophers of mind have attempted to reduce mind to matter – consciousness itself to the brain – claiming that mind states and brain states are identical. Other philosophers of mind, however, doubt that these reductive accounts of mind can work. One such is Thomas Nagel, who pointed out some of the problems with reductive accounts of mind in his famous article ‘What Is It Like to Be a Bat?’ in The Philosophical Review vol.83, #4 (1974). Nagel argued that even if we possessed all the physical facts about bats, such as the sense mechanisms of echo-location and bat neurophysiology, there would always be something left out of the physical account, namely, what it’s like to experience like a bat. Granted, we could always come up with clever ways to imagine a bat’s subjective experience, but these will always be simulations: we can never really get inside the skin of a bat, as it were. The same is true of each individual human consciousness, which is equally inaccessible to others. This inaccessible subjectivity is a defining feature of consciousness. But, as Nagel pointed out, science can only provide accounts of natural phenomena from an objective or third-person point of view. Thus, any proposed scientific, materialistically reductive account of mind will automatically leave out the subjective, first-person point of view of consciousness – the very thing we’re trying to explain!

Still, we needn’t go as far as René Descartes (1596-1650), and conclude that mind is a separate substance from the material brain – a view called substance dualism. We could instead subscribe to the perhaps more plausible property dualism, which says that there is only one substance, namely matter, but there are however distinct physical and mental properties. According to an ‘emergent’ version of this theory, when matter comes together in a certain complex arrangement, like a brain, mental properties of consciousness emerge from the active arrangement. On this view, the subjective contents of the mind – thoughts, sensations, feelings – although dependent on the material brain, are seemingly irreducible emergent nonphysical properties of the brain.

We will shortly use just such a property dualism for our cosmological account of an afterlife, but let’s first look at the possibility of a multiverse as proposed by some current cosmological theories. 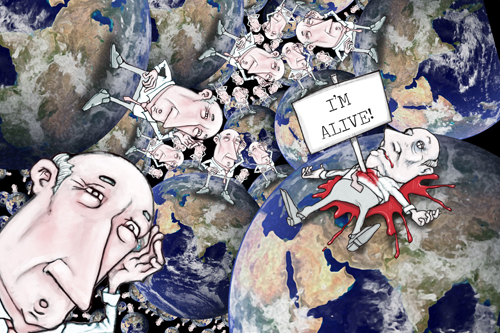 As current cosmological observations suggest, it’s likely that the matter distributed throughout our universe is governed by the same laws of nature. But there could also be a potentially infinite number of separate volumes of space, or separate universes, beyond the cosmic horizon of our own observable universe. This is the simplest kind of concept of a multiverse. It is what the physicist Max Tegmark has categorized as a ‘level one multiverse’, out of a possible four levels or types of multiverse [his theory is explained in the article by Sam Woolfe in Philosophy Now Issue 113, Ed]. As some physicists claim, if any type of infinitely-extensive multiverse exists, then it must include other universes similar or even identical to our own, with a duplicate Earth and a physical duplicate of you and me, with similar or even identical histories.

But, would a molecule-for-molecule physical duplicate of me in another universe be me? To try to answer this, we should look at what exactly makes me, well, me.

However, if emergent property dualism is correct, then my first-person consciousness emerges as a property, or rather, as the result of a set of properties, from the particular complex arrangement of molecules that is my brain. It therefore seems conceivable that if in another universe there is a molecule-for-molecule physical duplicate of my brain, with an identical history, then the first-person consciousness that is me emerges as a property (or more precisely, as the result of a set of properties) from this duplicate brain. To use philosopher John Searle’s example for his own form of emergentism in, for instance, The Rediscovery of the Mind (1992), this would be somewhat analogous to saying that the same property of ‘liquidity’ or ‘solidity’ emerges wherever the same molecular arrangements of H2O are found in the universe.

Would this duplication really constitute a type of afterlife? It might for instance be asked, if there are duplicates of you and me in other universes right now, why do you and I seem to experience from a first-person perspective only in this universe? Why don’t we experience in multiple universes, in multiple duplicates, at the same time?

Well, according to Baker’s view, two or more bodies cannot have the same first-person perspective at the same time without this resulting in contradictions. But as Baker also seems to suggest, there is nothing to prevent two or more bodies (or in our case, duplicates) from having the same first-person perspective at different times. So if combined with property dualism, it’s conceivable that perhaps when the first-person consciousness that is me here and now ceases to experience in this universe, my consciousness might afterwards come to experience anew in a duplicate in another universe, if, for instance, I get hit by a bus in this universe, while my doppelganger suffers a near miss.

All this is very speculative. But our cosmological theories of the universe, including the possible multiverse, along with the mysteries of consciousness, are too unresolved for anyone to assert with any confidence that death is the end of one’s consciousness. At the very least, this cosmological account of an afterlife could provide religious skeptics with the same glimmer of hope shared by many religious believers, that perhaps death is not the end.

Rui Vieira is a graphic designer living in Mississauga, Ontario.

Kant versus Hume on the Necessary Connection

Beyond Physics No More?

More Than Matter? by Keith Ward

The Many Worlds of David Deutsch