My photograph shows a flute-maker demonstrating his wares on a street in Iraq. Formerly known as Mesopotamia, Iraq has a rich cultural history. In fact, the first written language was most likely a Mesopotamian tongue, Sumerian. And it is in a Sumerian text that we encounter the earliest written mention of a flute. But the instrument was not invented by this ancient Middle Eastern civilisation. The oldest known flutes were found in Europe: in Slovenia and Germany. Remarkably, they seem to have been made by Neanderthals, perhaps 50,000 years ago or more. Of course, things have moved on since then, and modern flute-players tend to be sophisticated individuals, not cavemen. (Drummers are a different case.) 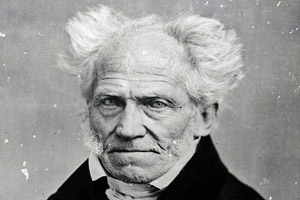 Because the flute is probably humanity’s oldest musical instrument, it is no surprise that it pipes up in philosophy now and then. For example, the gloomy Nineteenth Century German philosopher Arthur Schopenhauer played his flute every evening after dinner – leading his fellow-countryman Friedrich Nietzsche to conclude that Schopenhauer was not really the pessimist everyone thought he was. Schopenhauer owned flute transcriptions of all of Rossini’s operas, so we can imagine the old miserabilist enthusiastically tootling his way through the William Tell Overture or Figaro’s opening aria from The Barber of Seville. William Hendel asks, perhaps unfairly, about Schopenhauer: “Are those august ivory sideburns not suddenly and irredeemably ridiculous when seen astride a flute?”

Earlier in philosophical history, Sextus Empiricus describes how Pythagoras deployed a flautist to calm down some drunken young men:

“Pythagoras, when he once observed how youths who had been filled with Bacchic frenzy by alcoholic drink differed not at all from madmen, exhorted the flute-player, who was joining them in the carousal, to play… When he thus did what was ordered, they suddenly changed and became as temperate as if they had been sober.”

This theme of flutes having psychoactive effects on the hearer has a lengthy provenance. In ancient Hindu writings we read the story of Lord Krishna using his flute not to calm down, but to intoxicate, cowgirls, near the sacred river Yamuna. His divine melodies hypnotised them into falling in love with him. And in Plato’s Symposium, a drunken politician, Alcibiades, accuses Socrates of being a flute-player who can bewitch men with his tongue (without even needing a flute, he adds).

Flute-players arise throughout Plato’s dialogues, although he wishes they wouldn’t, as he firmly disapproves of flutes and those who play them. What’s more, he would banish them from the ideal city-state he describes in the Republic. So it is a little surprising that a female flautist ultimately makes a significant appearance in Plato’s own life. I will come to this heart-warming tableau later.

In the Republic Plato cites flute-players as a prime example of people who possess knowledge. This seems to be lavish praise indeed for flautists, since Plato rates knowledge very highly. He tells us that, in respect of their knowledge of flutes, flute-players are superior to flute-makers, who in turn are superior to those bluffers who try to convince us that they are skilled on the flute when they are not. We should regard flute-players as authorities on the topic of flutes, and flute-makers too must defer to their superior wisdom. The players have genuine knowledge, while the makers only have second-hand true opinion (doxa).

But here, Plato seems to be constructing a false dichotomy: that of ‘makers or players’. All the flute-makers I know – including the Iraqi craftsman and my favourite maker, McManus Whistles of Belfast – also play their instruments. Their authoritative knowledge about what makes a good flute comes, in part, from their knowledge of flute playing. However, Plato regards even the flute-playing type of knowledge as being rather lowly. It is ‘knowing how’ – a craft skill – rather than the elevated knowledge of the abstract Forms that the philosopher-king or queen needs to have. And maybe it’s not even a skill that’s worth acquiring to its fullest extent. Learning to play the flute to a high standard wastes time that could be put to better use, the hours of practice involving what present-day economists call an ‘opportunity cost’.

Aristotle feels that a gentleman should be able to play the flute – but not too well. For Aristotle, the Good Life means avoiding excess and aiming for the happy medium. And the dedication needed to become an international virtuoso on the flute would put excessive demands on our time and energy, leading to an unbalanced life. So, Aristotle approves of flute playing only as long as it’s not overdone. And even then, he has his reservations: “the flute is not an instrument which is expressive of moral character; it is too exciting” (Politics).

Despite Plato’s pronouncement that flute-players have a type of knowledge, he wants them banned completely. There is no happy medium for Plato, who favours pure ideals rather than Aristotle’s moderate and workable compromises between extremes. Flutes are dangerous in his idealised Republic, because the listeners who indulge in “winebibbing and abandoning [themselves] to the lascivious pleasing of the flute” might eventually allow a tyrant to control them and the rest of the undisciplined citizenry. Also, according to Plato, there is something unmanly about music-making: “when a man abandons himself to music… he melts and liquefies… and makes of himself a feeble warrior.”

So, flute-players would be expelled from his ideal city-state. But why Plato picked on these musicians in particular while allowing lyre-players to wander freely in his Republic is a question in need of an answer.

His reasoning is explained through his elaborate theory about the psycho-acoustic properties of musical instruments. Flutes, Plato argued, can play in all of the modes (roughly equivalent to ‘scales’) and so can bewitch all parts of the soul – the rational, the spiritual, and the appetitive. We might say the same of the Ancient Greek seven-stringed lyre, but there is one significant difference. The lyre is tuned to a particular mode, and any modulation into another mode would require a laborious retuning, which would take significant time and interrupt the flow of the performance. A flute, on the other hand, can quickly change modes just by suitable fingering. No retuning is needed. Such a sudden switch of mode could bamboozle the soul of the unfortunate listener.

Plato particularly disliked the mixolydian mode, fearing that this would soften the hearer’s soul disastrously. And a flute could easily segue between Brian Boru’s March in Plato’s favoured dorian mode to Banish Misfortune in the mixolydian mode, and so turn the audience to pacifist jelly. (These are Irish tunes, so they probably wouldn’t have been played in Ancient Greece, although they would be perfectly at home in Molly Malone’s Irish theme pub in present-day Athens, or indeed The Dubliner pub in Sulimaniyah, Iraq. Except the mixolydian mode contains peculiar notes unknown to modern Irish flute-players. They are unknown at the start of the session, at any rate; but perhaps they arise involuntarily as the evening’s shenanigans go on.)

Whether a contemporary musician plays in a mixolydian mode or not, the authorities are no longer afraid of the hypnotic effects. However, they still have other misgivings which can cause problems for the flautist travelling by air. I play a type of fipple-flute usually described as the ‘Irish tin whistle’ (though my travel set is made of aluminium). Under an airport X-ray scanner, a set of metal tubes looks suspicious. I’ve grown used to security people asking me to play a tune to prove that they’re actually musical instruments. A jaunty rendition of an Irish jig usually brightens their stern faces, briefly.

Photographing the Iraqi flute maker has also had some security consequences. The Iraq stamp on my passport (and others from equally interesting places that I visit for academic purposes) can cause problems at international borders. Once I was leaving the UK by sea to return to Ireland after a conference when a British special branch police officer scrutinised my passport. “Iraq?” he asked. “Pakistan? Why do you go to these places?” Under his accusing glare, I gave The Wrong Answer – the truth: “Because”, I said, “I’m a philosopher.” So, he took me out of the queue and into a back room. I was a bit unnerved by the box of latex gloves on his desk. But he returned a few minutes later with my passport, and informed me that my story checked out. Incredibly, he then tried to recruit me as a spy. But I declined his offer. My name is Seán Moran, not Sean Connery.

I promised a moment ago to blow the whistle on Plato. We are all guilty from time to time of saying one thing and doing another: our espoused theories and our actual practices are sometimes not in alignment. But it is satisfying to point out such inconsistencies in other people, particularly in famous philosophers. So here is a gentle rebuke of an Ancient Greek flautophobe.

As Plato lay dying (of old age, unlike his mentor Socrates, who was executed by drinking the neurotoxin hemlock), he did something surprising, knowing what we know about him. He summoned a Thracian flute-girl to play music to him in his final moments. This surprised her, too. The unusual occasion unnerved her. She was put off by her expiring audience and could not settle on the correct tempo for the piece. But Plato came to her rescue and wagged his finger to show her the rhythm: he conducted her performance. So, at the end of his life Plato not only accepted the “lascivious pleasings of the flute”, he also actively colluded with the performer.

In his last minutes, Plato was reconciled with the flute. Flute-players were finally redeemed and given the seal of approval by Plato on his deathbed. They can all breathe easily now.

Seán Moran teaches postgraduate students in Ireland and is Professor of Philosophy at a university in the Punjab. He is also a former national fleadh champion on the Irish tin whistle; and a founder of pandisciplinary.net.

Treason To Truth: The Myths Of Plato

Plato’s Cratylus: The Comedy of Language by S.M. Ewegen